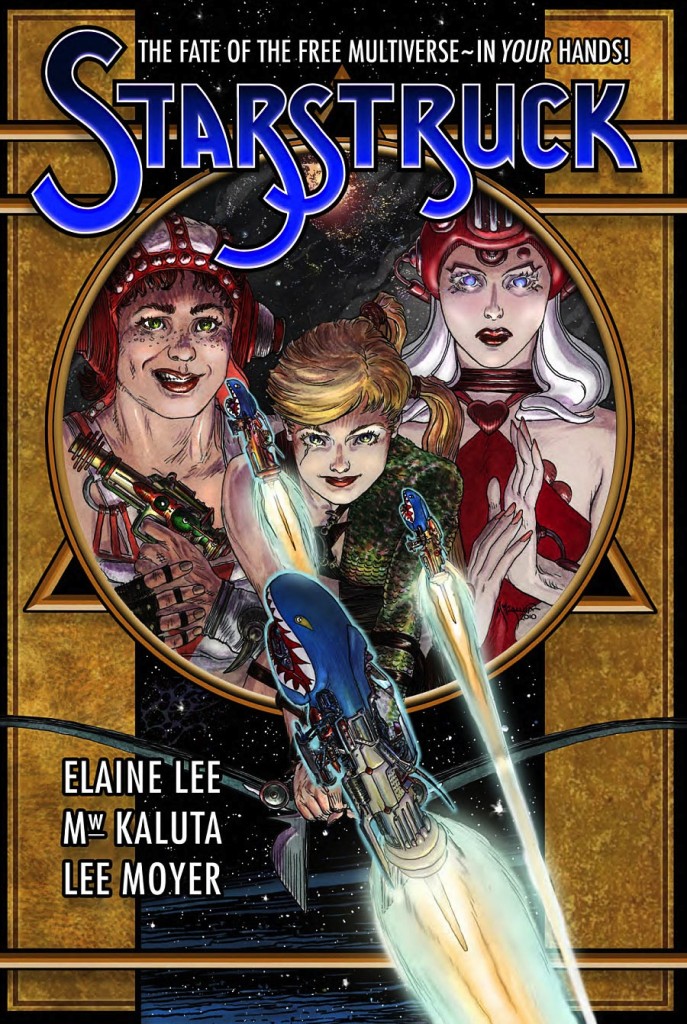 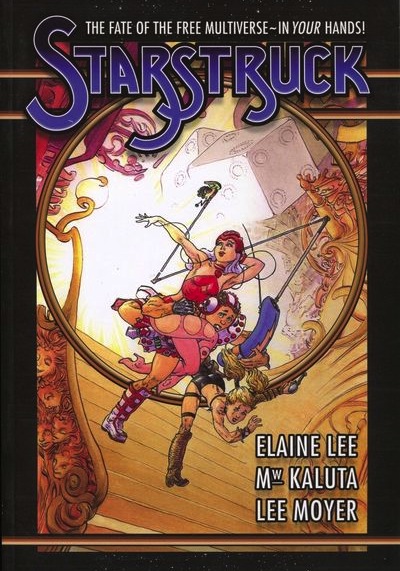 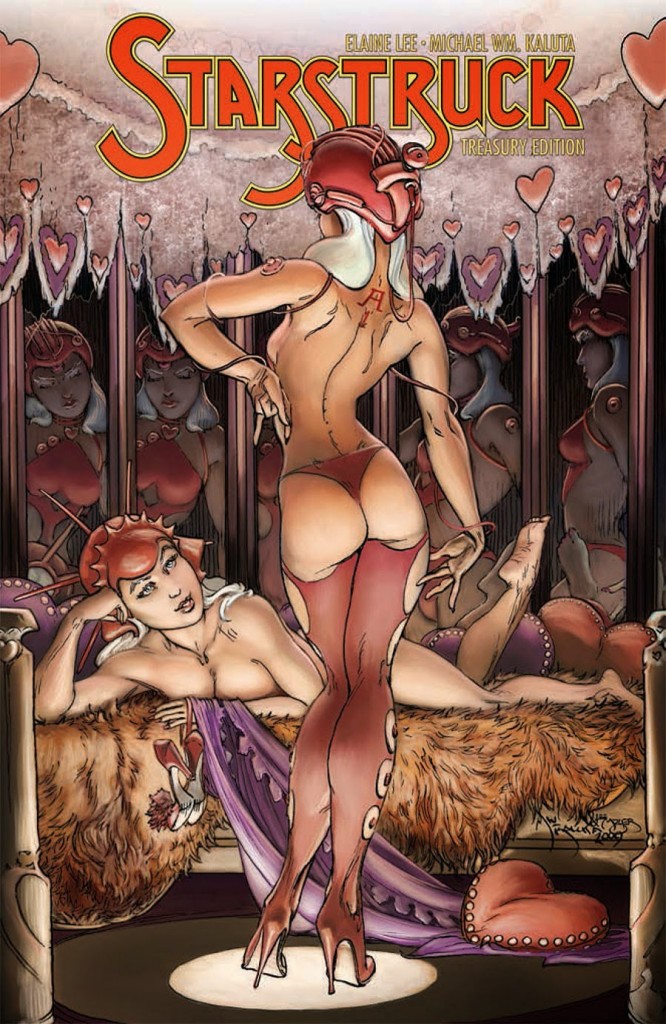 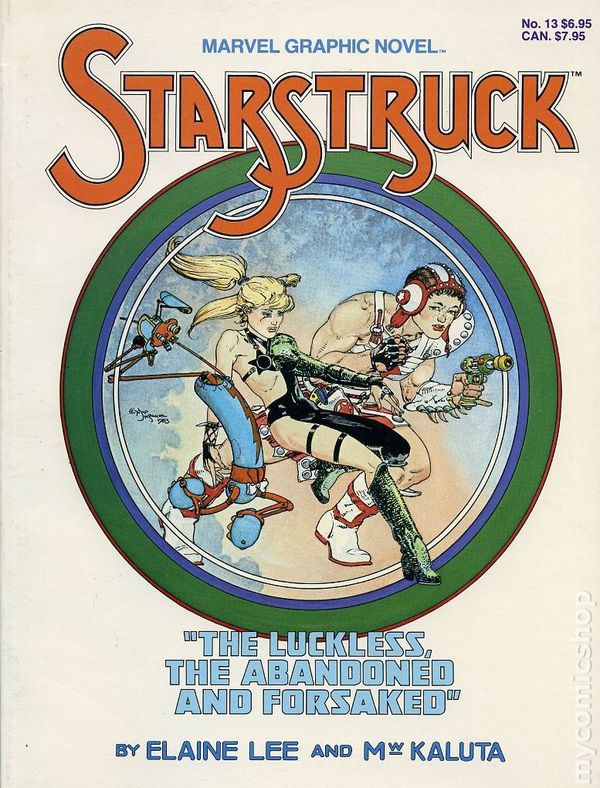 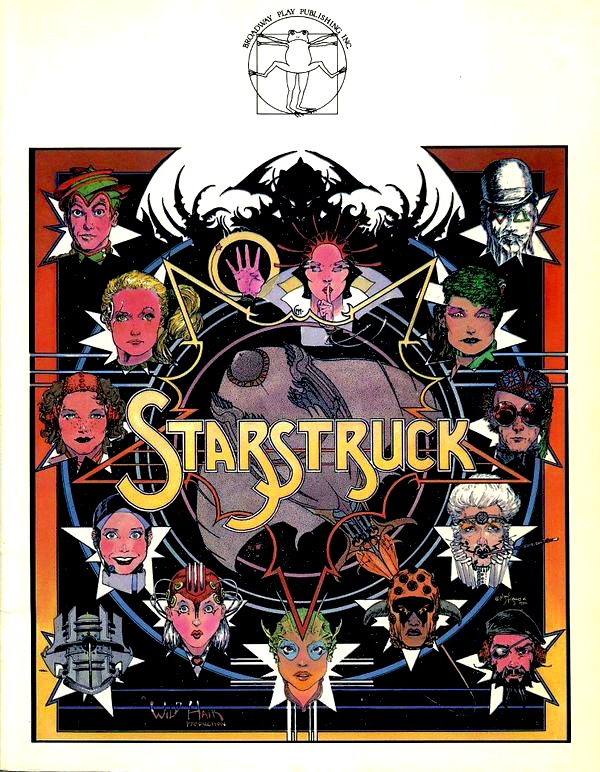 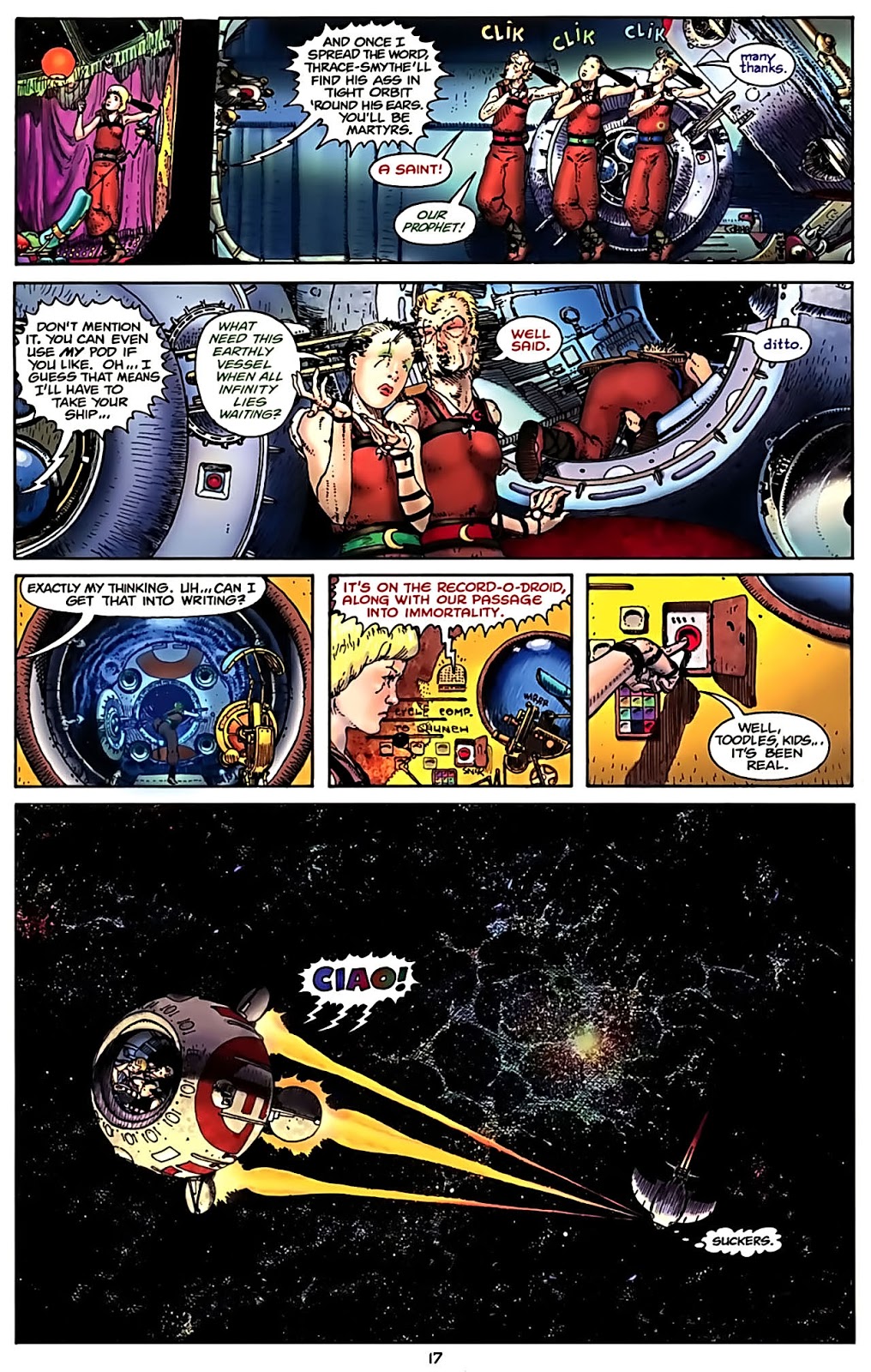 Starstruck is a complicated series to sum up, no surprise for a production that began as strangely as this one. Artist Michael Wm. Kaluta, one of the great stylists of 1970s DC comics, was sitting in a diner when he overheard Elaine Lee and her sister Susan Norfleet Lee discussing a stage play they were working on. He offered to design a poster and the bemused sisters took him up on his offer. He then designed some costumes, the sets, and eventually a series of prequel comics filling out the back story for the characters and the universe in which the play took place.

Starstruck is a classic science-fiction space opera with a big cast. It celebrates all the clichés of the genre while mocking them relentlessly, in a Hitchhiker’s Guide to the Galaxy style. It’s super densely layered, ridiculously crammed full of sight gags, vivid characters, grandiose settings, and witty dialogue. There are multiple plotlines with so many people, the strip cutting between them all to the point that it’s almost impossible to figure out what is happening till you’re quite some way in. It’s such intriguing, beautifully drawn and funny stuff that the bamboozlement is a pleasure. Just give yourself over to the magic tricks of Lee and Kaluta and let them waltz you around from one group of cranks to the next. It’s incredibly rare to have two such witty and intelligent creators, so expert at their craft, so deeply invested in creating a universe as well realised (and ridiculous) as this.

The main protagonists are a small blonde amazonian warrior punk called Galatia-9, from the Medea, one of the two clans vying for control of the galaxy; and Brucilla “the Muscle,” an oafish space brigade pilot for the Bajars, the rival clan. They team up to lie, explode and steal their way around the universe with their science officer, Erotica Ann, a sex droid who has become self-aware and rejected her former subservient  programming.

The first stories were published in 1982-83 in a Spanish magazine and then in Heavy Metal magazine, followed by a collection called The Luckless, the Abandoned and Forsaked, published by Marvel. A further six issues were published in 1985 by Marvel’s Epic imprint. In 1990, Lee and Kaluta revised and expanded everything they’d done up to that point with four issues for Dark Horse. Then in 2009, IDW revived the series with a 13-issue run that again added more material, with all the existing pages partially redrawn by Kaluta and deftly recoloured by Lee Moyer.

This big hardback volume from IDW collects that now-definitive revision of Starstruck, along with a lot of extra content. Elaine Lee has expanded the mad Glossary which defines the universe and all the characters in it, there are previously unpublished Galactic Girl Guides stories with art from Michael Wm.Kaluta and Charles Vess and pin-ups, posters and other commentary.

The superbly nuanced writing of Elaine Lee and the romantic, intricate drawing of Michael Wm. Kaluta made Starstruck something new in American comics, as challenging and groundbreaking as Watchmen or The Dark Knight Returns, but created years ahead of either of them. Finally it’s available in a form that will allow new readers to catch up. Starstruck isn’t light reading either in style or the size of this hefty book, but it’s totally worth trying if you like Firefly, Battlestar Galactica, Starship Troopers or Futurama. Or even if you have no interest in science fiction at all. This is remarkable work and there’s nothing quite like it. “It’s a tough universe! Someone’s gotta live in it: it might as well be you!”