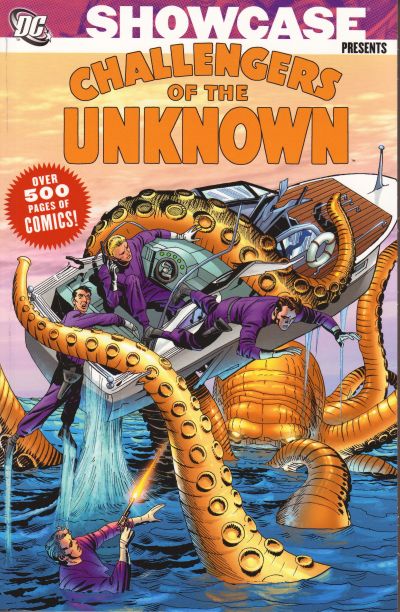 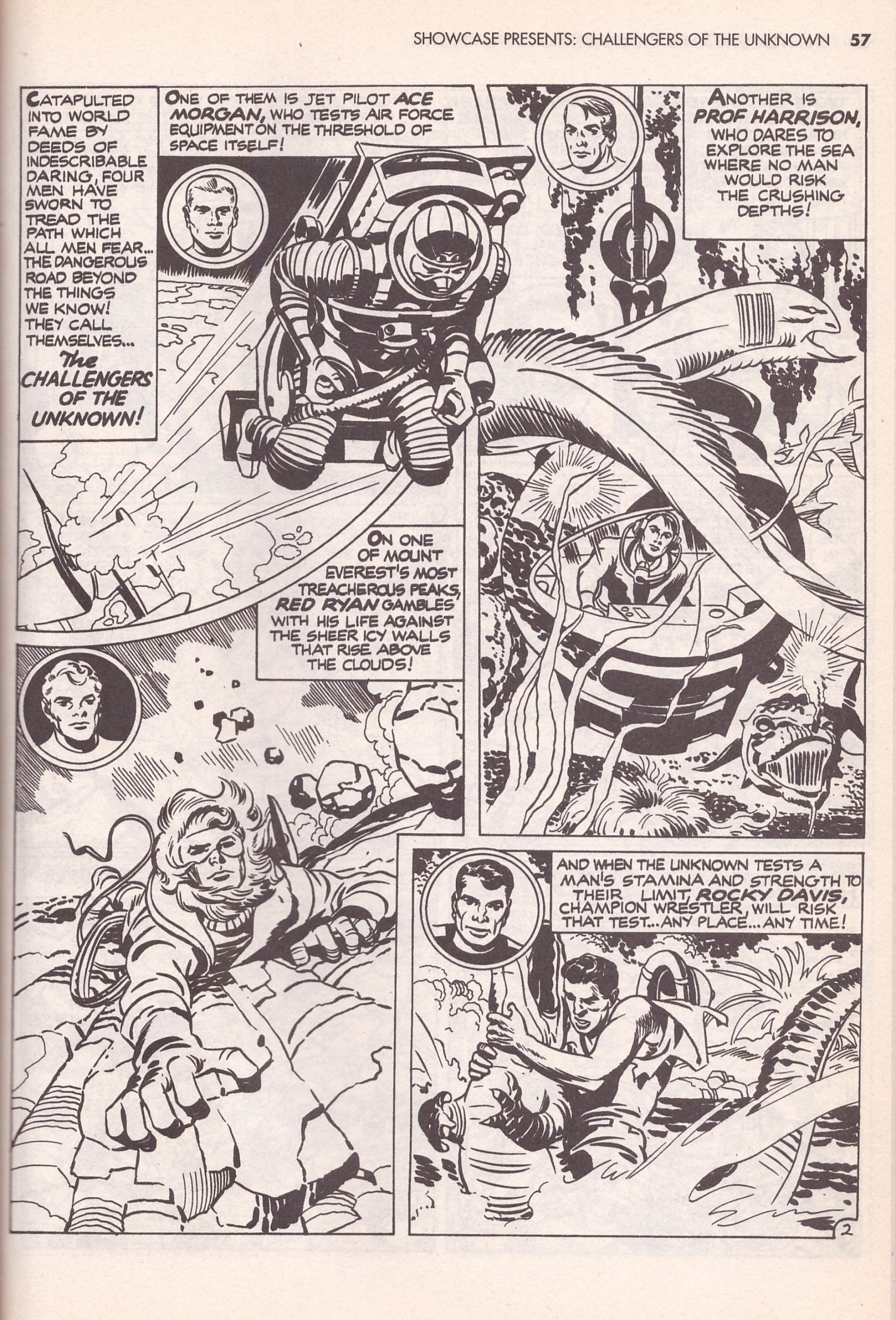 In an era when comics slipped into an undirected and formless mass of genre-niches, the Challengers of the Unknown were a bridging concept between the fashionably all-American human trouble-shooters of the 1950s and the costumed mystery men who would take over the industry.

Superheroes were being gradually revived in 1956, and the Challengers are a super-team, the first of the era, yet with no powers, the most basic and utilitarian of costumes and the most dubious of motives: suicide by mystery. They were a huge hit. The idea was stirring enough, but their initial execution made their success all-but inevitable.

The person responsible was Jack Kirby, the most important single influence in the history of American comics, working on one of his best and most under-rated projects, and all Kirby’s contributions are here.

Although with individual talents, Rocky Davis, Prof Haley, Ace Morgan and Red Ryan are four ordinary mortals; heroic adventurers and explorers who walk away unscathed from a terrible plane crash. They decide that since they’re all living on borrowed time, they will dedicate what remains of their lives to testing themselves and fate, risking their lives for knowledge and, naturally, justice.

The Kirby tales are immortalised in a full-colour collection and Archive editions, but the team captivated readers for a decade beyond those glorious beginnings, and thus far those subsequent tales are only available in these monochrome tomes. Find more in Vol. 2.

‘The Secrets of the Sorcerer’s Box!’ launched the series. Kirby and scripter Dave Wood craft a spectacular epic of the doom-chasers hired by duplicitous magician Morelian to open an ancient container holding otherworldly secrets and powers. It roars along with all the tension and wonder of the b-movie thrillers it emulates, and Kirby’s awesome drawing resonates with power and dynamism. That continues for the sequel, a science fiction drama sparked by an alliance of Nazi technologies and American criminality unleashing a terrible robotic monster. ‘Ultivac is Loose!’ also introduces beautiful and capable boffin Dr. June Robbins, who becomes the unofficial fifth Challenger at a time when most comic females (and living ones) had been banished back to subsidiary domestic status in that so-conservative era.

Having set the template, Kirby with occasional scripters Wood or Ed Herron, blends daredevil heroics and ingenuity over a succession of genre-straddling adventures. Of particular note is ‘The Menace of the Invincible Challenger’. Team strongman Rocky is rocketed into space, only to crash back to Earth with strange, uncanny powers. For years the obvious similarities of this group – and especially this adventure – to the origin of Marvel’s Fantastic Four have fuelled speculation. Does it matter? They’re both good.

Kirby’s artistic virtuosity becomes perfect with the addition of Wally Wood’s luminous brilliance, his inking elevating the art to unparalleled heights. The depth of his brushwork fosters an abiding authenticity in even the most outrageous of Kirby’s designs and the result is – even now – breathtaking.

The Challengers would follow the Kirby model until cancellation in 1970, but he resigned after an editorial disagreement. As with all Kirby’s creations, every element was in place for the successors. The writers of the strips occupying the final third of this collection are unknown, but they increase in the fantasy elements while easing the subtle tensions and inter-group fractious bickering.

However, one man took over the illustrator’s role: Bob Brown. He was a consummate professional and drew the Challengers for almost a decade. Challengers of the Unknown is sheer escapist wonderment, and no fan should miss the graphic exploits of these perfect adventurers in the ideal setting of not so long ago in a simpler better world than ours. 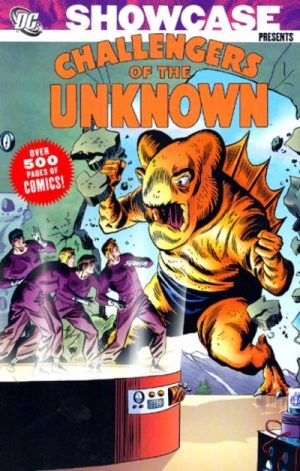