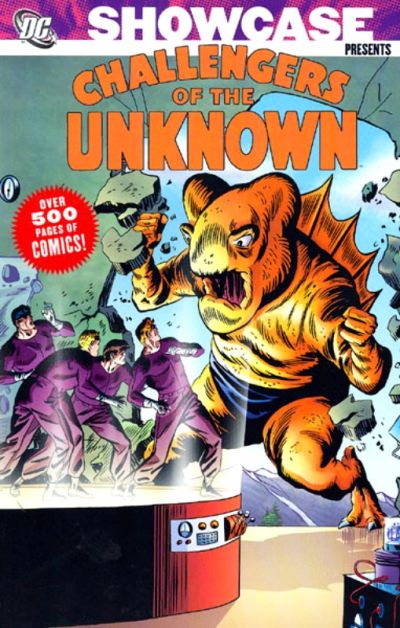 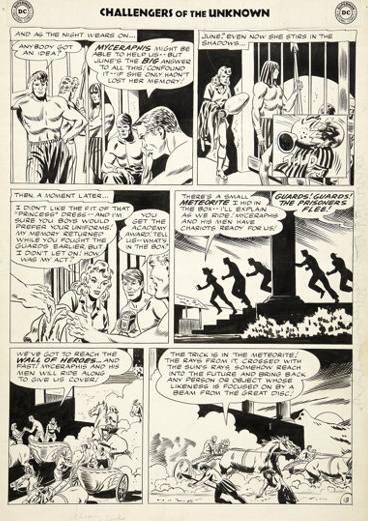 Cool pilot Ace Morgan, indomitable strongman Rocky Davis, intellectual aquanaut “Prof.” Haley and daredevil acrobat Red Ryan are the Challengers of the Unknown: four (extra)ordinary mortals who walked away unscathed from a terrible plane crash. As seen in Vol. 1, they subsequently dedicate their lives to testing themselves and helping others. This second cheap and cheerful black and white volume collects their adventures from 1961 to 1964. Creator and guiding force Jack Kirby has gone, and a number of writers, many sadly lost to posterity, wrote these tales. They include Bill Finger, Ed Herron, Jack Miller, Bob Haney and Arnold Drake, but one man handled the artwork: Bob Brown. He was a consummate professional and drew almost a decade of high-adventure ranging from ravaging aliens, cute-and-fuzzy space beasts to truly scary supernatural horrors.

We open with ‘The Menace of Mystery Island’ which finds the team fighting crooks on a tropical island that contains a crashed alien probe. This accident has deposited a test animal with uncanny powers, and in the manner of the times, the tenacious troubleshooters adopt the fuzzy li’l space-tyke and name him Cosmo. He’s a popular little tyke, and returns for ‘The Challengers’ Space-Pet Ally’ and ‘Captives of the Alien Hunter’, before concerns about his loyalties and covering the power of teamwork, which was just as well since the second tale reveals how and why ‘Cosmo Turns Traitor’.

Occasional fifth Challenger June Robbins is used more sparingly, showing up for a spot of beastie-bashing in the hectic riddle of ‘The Cosmic-Powered Creature!’, with Cosmo solving the problem of the alien hunter. However, there’s someone else determined to be ‘The Fifth Challenger’. Gaylord Clayburn (Don’t. Just don’t. Grow up): a spoiled multimillionaire playboy is prepared to go to any lengths to achieve his ambition. He’d become a recurring nuisance. The Challengers are also developing recurring villains, although Multi-Man’s different power in every appearance makes him fresh each time. He appeared twice in Vol. 1, and returns four times here in ‘Multi-Man Strikes Again’, ‘Multi-Man, Master of Earth’, which is a grand, old-fashioned battle for justice against a seemingly unstoppable foe, and ‘Multi-Man… Villain Turned Hero’. That’s just another evil ploy by the shape-changing charlatan, who later discovers that no matter how smart you are, building the perfect mate is a very bad (and tasteless) idea in ‘Multi-Woman, Queen of Disaster.’ Volcano Man would also be seen again, introduced in the first story with a confirmed writer, Arnold Drake.

There is no limitation to the Challengers’ adventures. They’re shanghaied through time to save ‘The Doomed World of Tomorrow’. ‘The War Between the Challenger Teams’ ends conflict between two sub-sea races. They’re ‘Bodyguards to a Star’ on the location of a dinosaur-infested movie epic, whilst in ‘The Beasts from the Fabulous Gem’ a stolen mystic jewel liberates monsters imprisoned within it in ancient times. ‘The Triple Terror of Mr. Dimension’ has a cheap thug luck into a reality-altering weapon, ‘Four Roads to Doomsday is a plot by alien criminals to conquer Earth, and ‘Beachhead, USA’ concerns a U-Boat full of Nazis frozen since World War II commanded to blow up the East Coast of America. Aliens feature regularly, such as in ‘The War Against the Moon Beast’ or ‘The Alien Who Stole a Planet’.

This splendidly daft second volume proves reader-friendly to anyone with a love of wild thrills and is still sheer escapist wonderment. 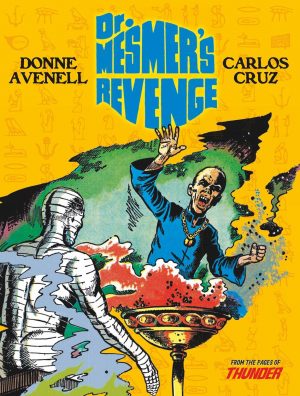