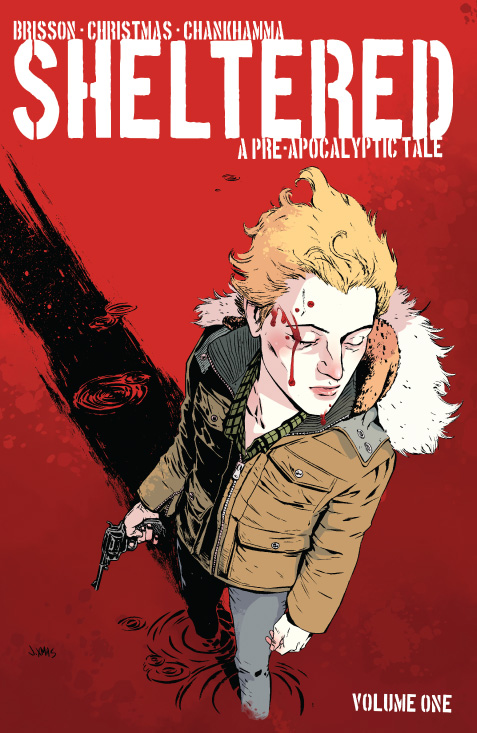 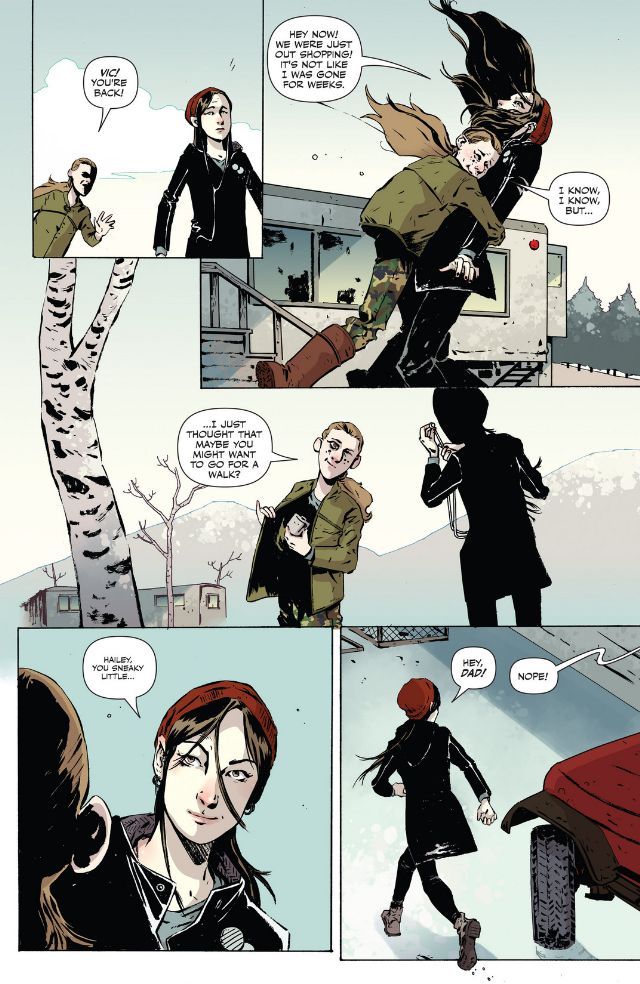 Sheltered sets itself up as a pre-apocalyptic tale, a story about our deep-seated fear of imminent annihilation. Its cast is libertarian survivalists, and its setting is the US town of Safe Haven, an isolated community miles from civilisation, a snowy potential Waco or Jonestown. However, it’s not the fear of the apocalypse that truly fuels this story, but a deeper, more subversive, more intriguing fear – paedophobia. In Sheltered, the paranoid adults fear the danger from without when they should really be fearing the enemy within. The town falls under the leadership of a charismatic, manipulative sociopath, Lucas, precipitating terrible consequences. This allows the book, in turn, to explore the true horror that can be found in the human heart.

Writer, Ed Brisson plays on a Lord of the Flies vibe, with the juvenile cast, both male and female, taking centre stage. If Chris takes on the Jack role, the heart of darkness figure, it is up to Victoria, one of only two children not in on the original conspiracy, to take on the Ralph role as the voice of reason. This potential conflict is somewhat muted by Vic spending the bulk of the story trapped in an underground survivalist bunker. Lucas makes for a fascinating nemesis during the tense cat and mouse moments when Victoria surfaces and, though the antagonist, she proves to be the story’s most interesting and engaging character.

The premise of Sheltered is a solid one with the potential for critiquing our world and the fractious relationship that the adult world often has with a youth that it fetishises into “hoodies.” However, while the story is interesting and Brisson uses a slow burn pace to build tension, the narrative is good rather than exceptional. Lucas’ pivotal deception of his peers is predicated on the explosion of the Yellowstone caldera, based on the growth of earthquake activity. The tale itself has yet to explore fully enough the seismic nature of the relationships between the characters and the shifting tectonics of their relationships and loyalties. The art, by co-creator, Johnnie Christmas, is solid, but the story lends itself more to static scenes and character interactions and it would be preferable to see the artist being given more dynamic storytelling to chew on.

After a solid start, volume two is even better.