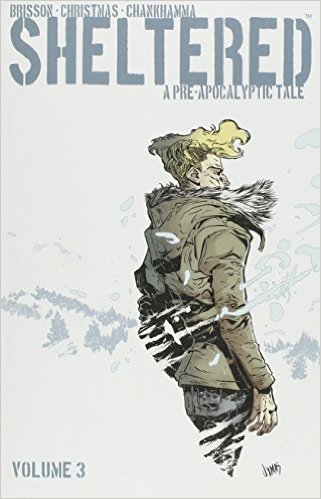 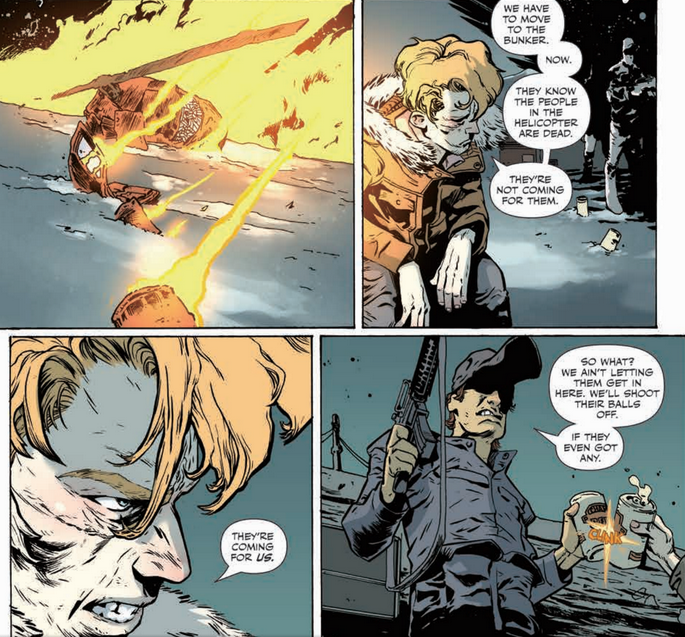 Few escape Sheltered unscathed as the inevitable war breaks out between the survivalist children and the forces of authority. The snowball that started rolling downhill in the opening volume has gathered too much momentum to be stopped, and this energises the text and leads to a brutal, explosive climax. The pacing of this confrontation is handled well, allowing the drama and pathos room to grow naturally, creating more sympathy for some of the story’s teen villains than could have been expected. Even Victoria, the ostensible protagonist of the series, a character who often fails to be engaging enough, is given depth and complexity in how she handles the events that unfold and their repercussions.

Ed Brisson has deeper ideas to explore in this final arc and he picks his targets well, skewering an intrusive, voracious and predatory media wanting to feast on bloody carnage and tragedy, as well as the PR obsessed authorities and parasitic conspiracy theorists, all presented as equally ugly. Brisson wants to critique society’s fetishisation of violence, guns, the apocalypse and feral youth. In doing so, he suggests that it is not just the children of Safe Haven who are sheltered, divorced from reality, but the reader too, and the book raises some interesting and uncomfortable questions. The parents of Safe Haven brought their children up in an atmosphere of paranoia and fear and pay a heavy price for it, as Brisson suggests our wider society could be doing by infecting and contaminating our progeny with our own neuroses. Brisson’s only misstep is to end the story with a final twist as inevitable as it was unnecessary.

As a book, the final volume of Sheltered wraps up the story neatly and satisfyingly. Grand Guignol massacres are avoided but the violence, while plentiful, is never cheap or sensationalised, serving the wider story and its painful themes instead. The horror of children as both perpetrators and victims of violence is dealt with respectfully and never shied away from in a story that, while it never quite reaches its full potential, is often gripping and thought provoking.