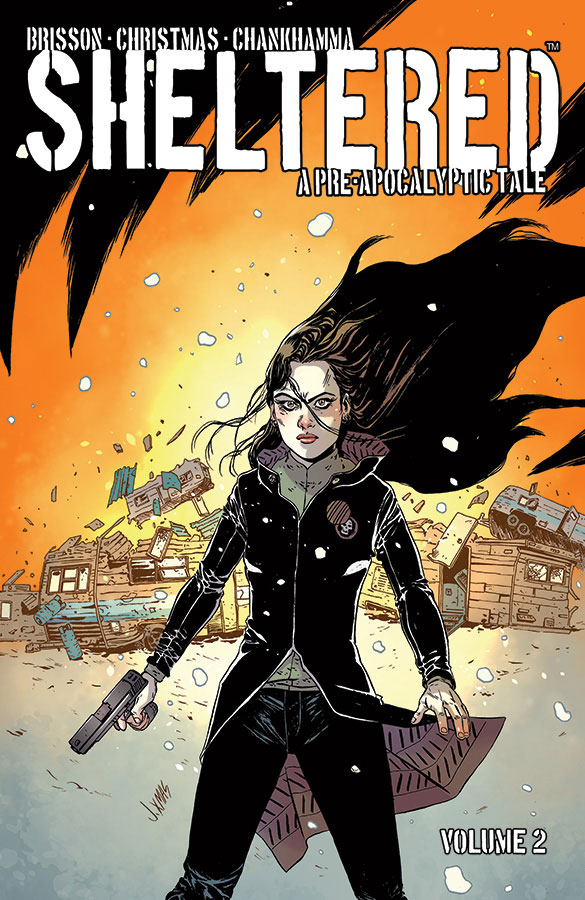 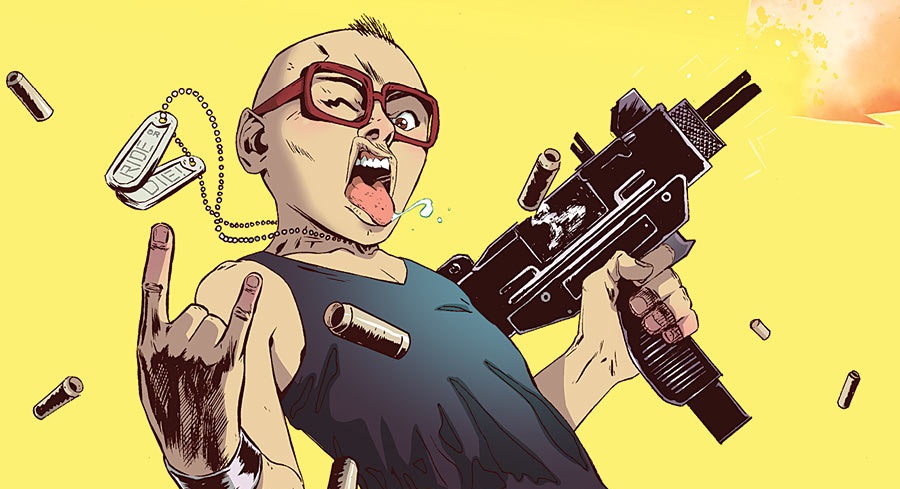 Where volume one took its time to establish its premise and its pre-apocalyptic setting, this is more action packed and incendiary, upping the pace and allowing the narrative itself to explode into life.

Ironically, for a story about children and their conflicts, it is only with the introduction of adult characters that the story becomes more emotionally engaging. Writer, Ed Brisson, opens the book by taking us, for the first time, outside the survivalist town of Safe Haven and its claustrophobic worldview. We’re introduced to the adult character of Cliff, a family man becoming financially desperate, and whose need to complete a deal sets him on a collision course with the town of cultish, homicidal children. Cliff’s back story is given time to unfold and Brisson crafts him as a character that we root for and sympathise with. Cliff’s battle for survival adds drama and energises the story greatly. Scenes in which he must do the unthinkable to survive are shockingly brutal but you feel the emotional weight that the character must carry and his abhorrence at his own desperate action. Cliff makes for a more interesting protagonist than Vic, the girl at the heart of the first book.

The children of Safe Haven fare better in this second volume also, as crevasses begin to appear in Lucas’ leadership and the resulting fallout promises chaos. The conflict between Vic and Lucas becomes much more intriguing and unpredictable as Lucas struggles to maintain control and play surrogate father. Further emotional heft and complexity is added when some of the murderous bunch, stripped of Lucas’ illusory manipulations, must look in the mirror darkly and reflect on their violent tendencies. The emotional journeys add a healthy realism, a sense of jeopardy and a price to be paid. Some readers may therefore struggle with the focus on the prepubescent character of Curt, a pint-size terror in the Eric Cartman mode. He is foulmouthed, completely psychopathic and represents the paedophobic tabloid nightmare incarnate, a gleefully demonic and ungovernable child, the id let loose. Curt is the catalysing force for much of the violent action in this volume and, while he is an unrealistic figure, he is wonderfully entertaining. Brisson clearly takes pleasure in writing the character, though the reader may find him too hyperbolic.

Johnnie Christmas is given a wider and more dynamic canvas to work with in this second volume of Sheltered and he acquits himself well, though, at times, his facial expressions can go a little awry. His action and storytelling muscles are given more room to flex. Scenes of violence, especially those involving children, are brutal and disturbing but well rendered and necessary for narrative progression. While volume one had the more difficult job of selling the premise of a community of homicidal children, this second volume has a surer footing and progresses the story in gripping fashion, rewarding the reader’s patience. Is volume three as good?