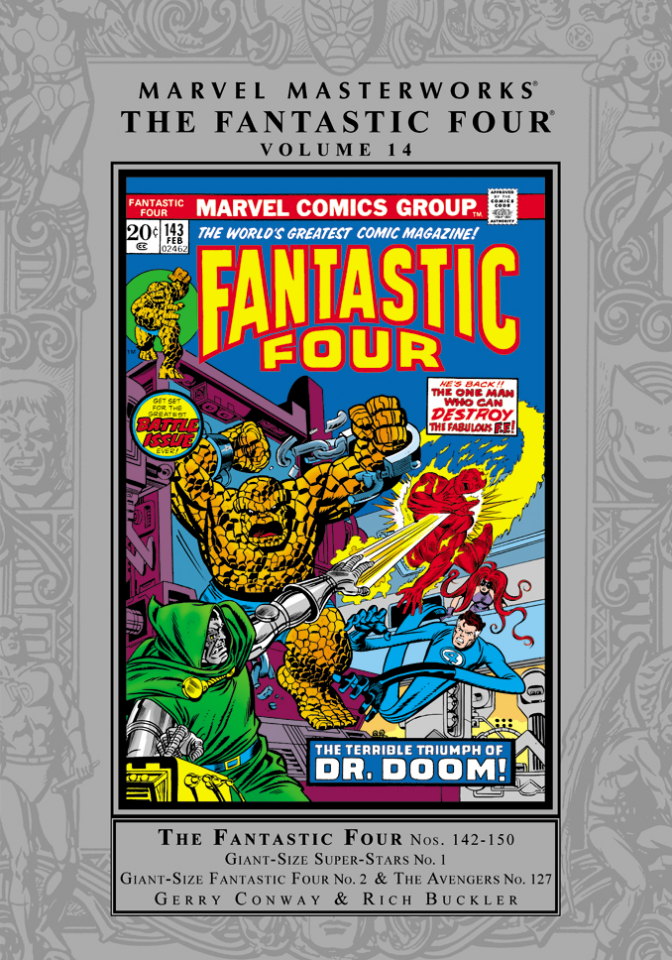 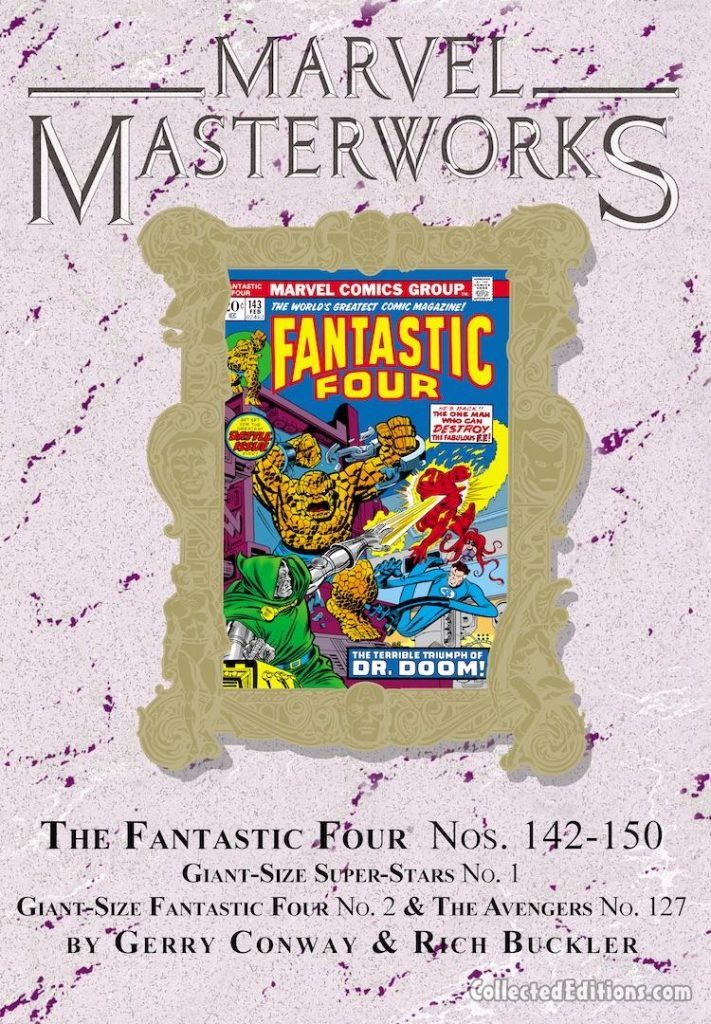 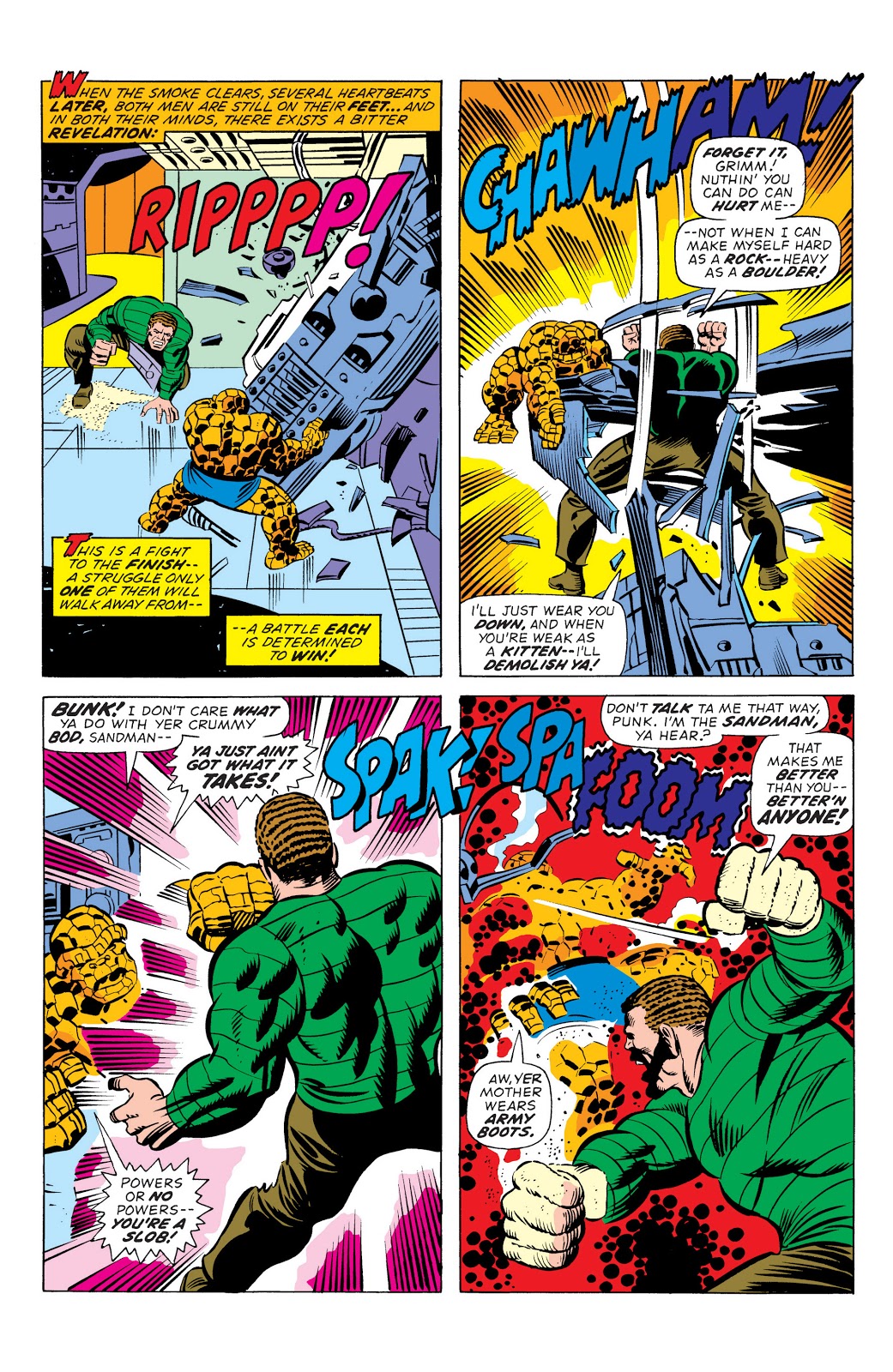 Gerry Conway writes almost this entire Masterworks selection, which opens with his introduction, around a third of which defends Rich Buckler, who draws most of his scripts. Conway refers to “a few self-important members of the fan press” when noting the grief Buckler received for “his attempt to replicate Kirby’s style and story-telling”. Well, seeing as he raised the subject… Conway would be right if that’s all Buckler did, but he went further and frequently resorted to swiping panels directly from Jack Kirby’s work and presenting them as his own. There’s a blog featuring dozens and dozens of examples, among them all four panels of the sample page, two of which are almost direct copies, and two of which slightly rework Kirby’s originals, and it gives many other examples from the same story. Ignore that, and as Conway notes, Buckler’s art recaptures the feeling of the mid-1960s FF. Conway, though, doesn’t copy his dialogue directly from Stan Lee, which is the crucial difference.

Also, while Conway’s aiming for the feeling of the mid-1960s FF he read in his early teens, he also recognises times has moved on and is trying to do something different with these stories. In Masterworks 13 Reed and Sue Richards separated, and Conway extends that to splitting the entire team, before returning Sue in surprising, and for Reed heartbreaking circumstances. The result is a series of stories where everyone features, but not always together. The Thing kicks these off, pitted against new character Darkoth, the Death Demon, at first seeming a stock monster, but given depth and pathos by Conway. He did return, but Ternak the subterranean threat from the following adventure was never seen again, and with good reason.

“Somehow that cockeyed machine switched our minds! The Thing’s brain is in the Hulk’s body an’ Bruce Banner’s is in the Thing’s!” That’s the premise for what Conway notes as having spectacular art, which in one sense it is, but Buckler copies many poses and layouts from Kirby Thor pages, with just the characters modified. It’s fun, as is the second giant-sized issue in which the FF skip around time, with tongue in cheek use of historical persons and cultural references. Ben Grimm in 1920s gangster times provides the most enjoyable chapter.

What looks to be just another battle with Sub-Mariner is spiced up by the addition of Thundra, and has a clever ending that should still wrong-foot readers, and this selection closes with the wedding of Crystal and Quicksilver, which was a big deal at the time. As the Avengers are involved it’s half-written by Steve Englehart, and picks up plot threads from a story in FF Masterworks Volume 13, but, again, with a twist. It starts as a character piece exploring the dynamics between assorted people and closes with a desperate battle against someone powerful enough to take them all on.

Conway’s greatest strength in these stories is the ability to surprise, which occurs regularly, and there’s a sly sense of humour working away in the background, most obviously seen in revealing who’s responsible for the FF being flung through time. As before, though, while several stories here have nice moments, there’s nothing that intrigues and compels all the way through.