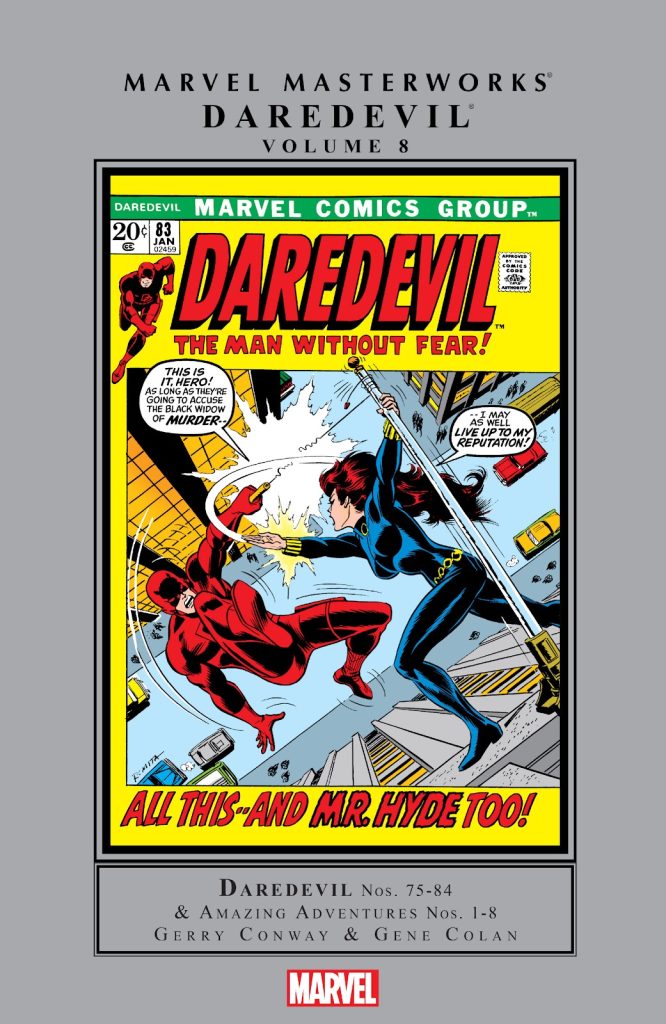 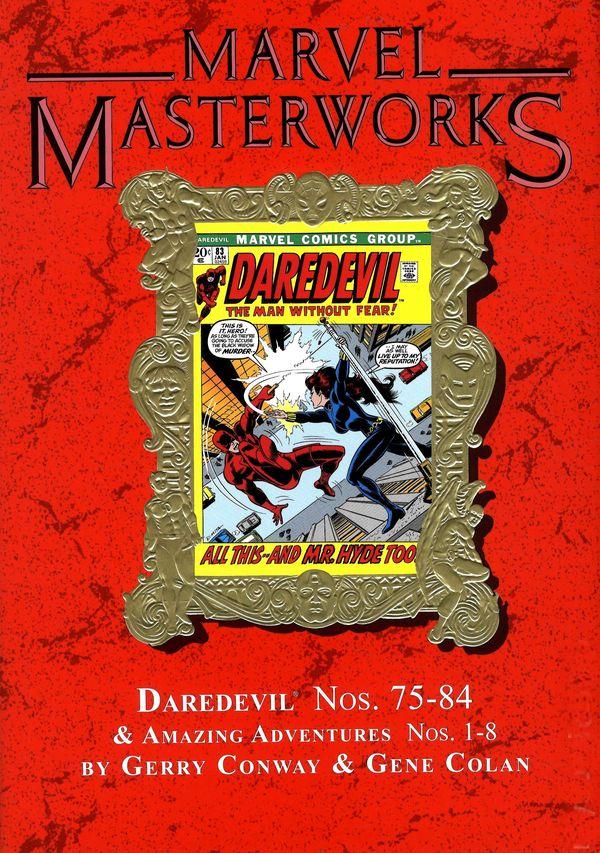 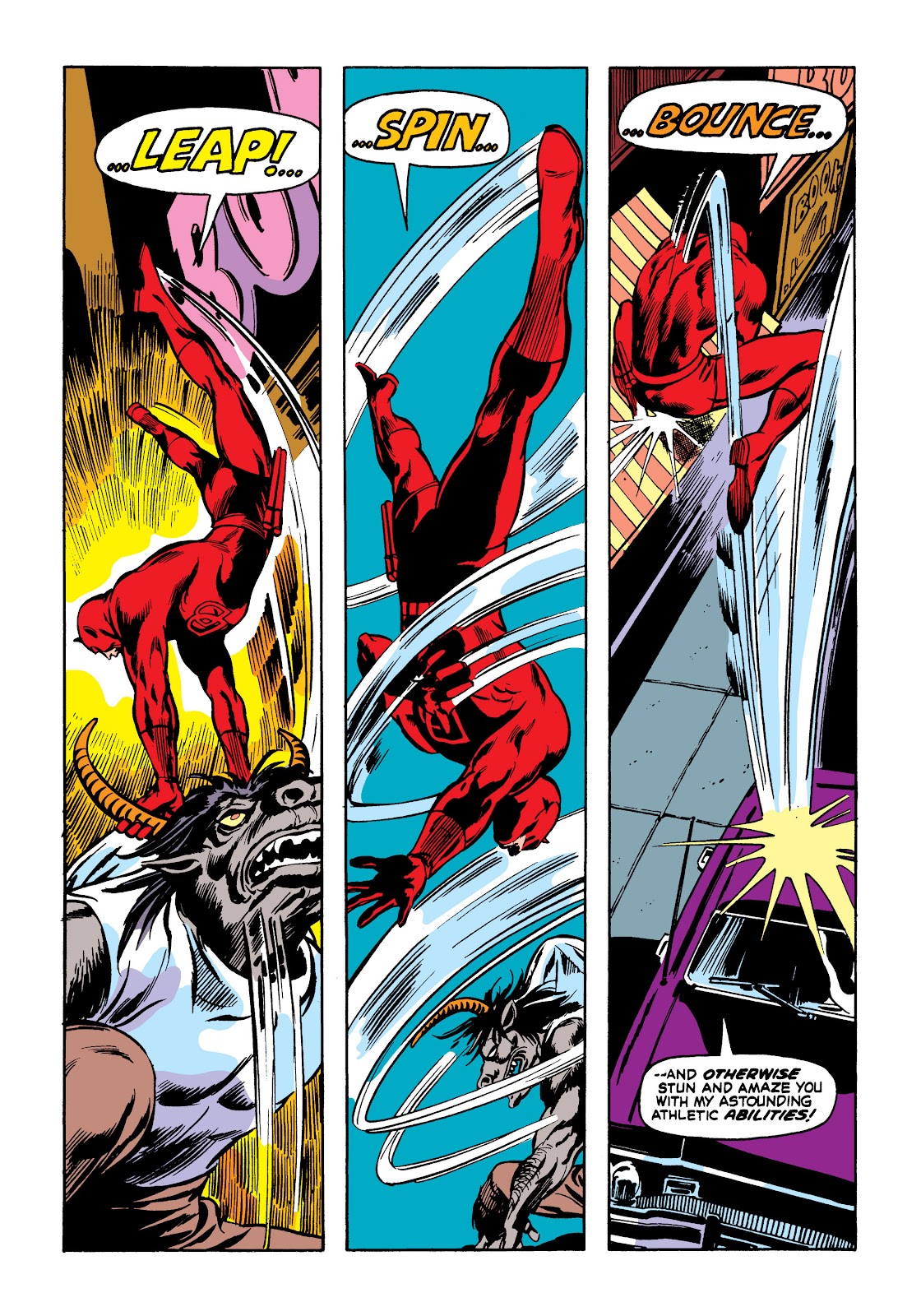 This bulkier than usual edition of Daredevil Masterworks still contains the customary ten issues of Daredevil’s own adventures, covering 1971 and into 1972, but is prefaced by the eighty pages of Black Widow’s solo series from 1970 to 1971. Daredevil wasn’t among Marvel’s better sellers, and it was felt pairing him with fellow costumed athlete Black Widow might raise sales and boost her profile after that brief solo run.

In principle Natasha Romanova’s solo series is enticing, with an artistic line-up including John Buscema, Don Heck and Gene Colan suggesting there can’t be much wrong, but three artists over eight chapters tells its own story. Even at only ten pages per episode either the writer or the artist changes with every successive episode, the attempts at dealing with the era’s social problems are half-hearted, some of the dialogue is horribly dated, and at times Natasha’s interest in social standing seems a priority.

The action then switches to solo Daredevil under the control of Gerry Conway, and if making allowances for the stories, attitudes and dialogue being of their era (as Conway asks in his introduction), there’s fun to be had. A troublesome Central American revolutionary is followed by a bizarre, introspective confrontation between DD, Spider-Man and Sub-Mariner, and a makeover for old foe Man Bull. Colan continues on pencils, as perfect as he was on Volume 7, and as he will be on Volume 9, but on most of the book Tom Palmer is the regular inker. Colan and Palmer would become a classic artistic combination, but there are teething problems to work through here. Instead of going with Colan’s natural fluidity Palmer at first attempts to force the pencils into a more traditional superhero look, only gradually modifying to accept Colan’s strengths, and the best looking pages are their final collaboration here. No colourists are credited, so is it also Palmer’s responsibility? There’s certainly a greater subtlety than on earlier work, but as ever with the paper Masterworks editions the colours are ramped up too brightly for the gloss paper.

Palmer’s departure coincides with the arrival of the Black Widow to rescue Daredevil from a watery grave, with equally watery inks from Jack Abel. Conway’s initially combative relationship between the pair is unconvincing, although nicely drawn by a combination of Barry Windsor-Smith (layouts) and Alan Weiss when it comes to a head. Also ill-advised is the conclusion to a plot about a scheming manipulator taking a wild swerve into Terminator territory, although let it be said, before Terminator. Plot holes abound with the villain’s downfall being his greatly complicating matters.

Pretty well the entire book’s an artistic treat, but little else stands the test of time, and Conway’s introduction to Volume 9 mentions how much stronger those stories are. The content of both is also found in black and white as Essential Daredevil Vol. 4.