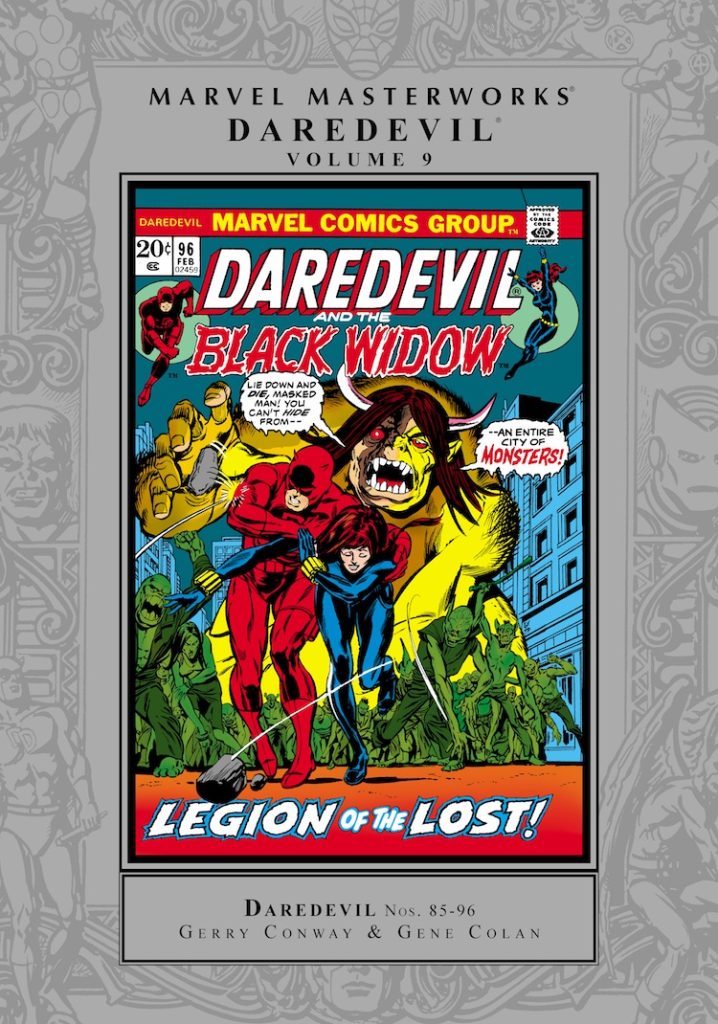 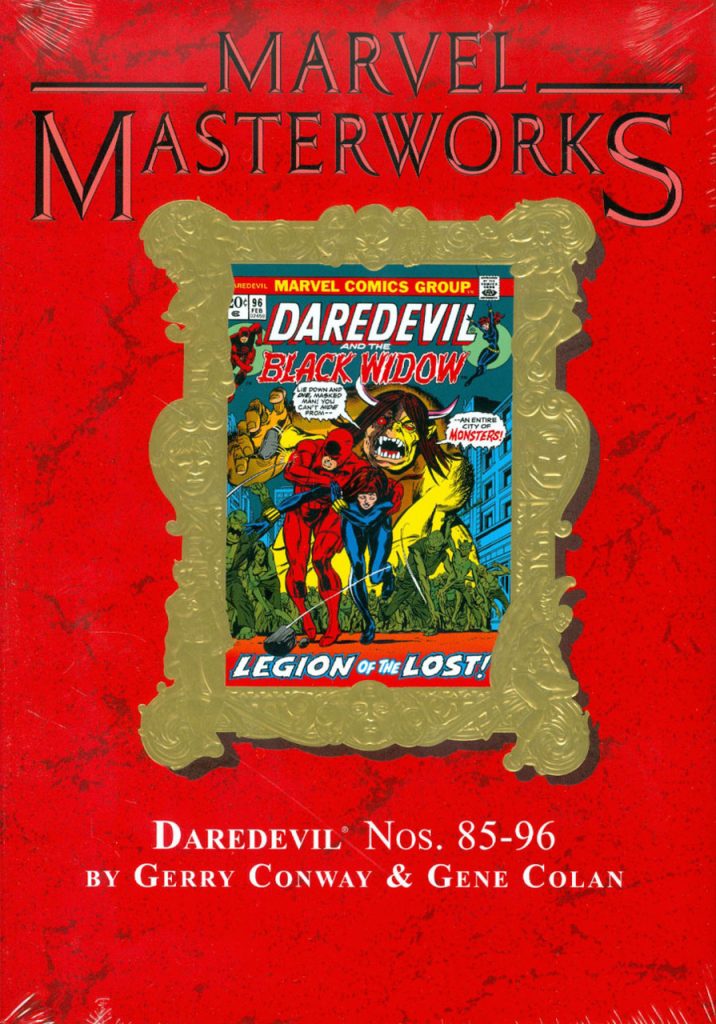 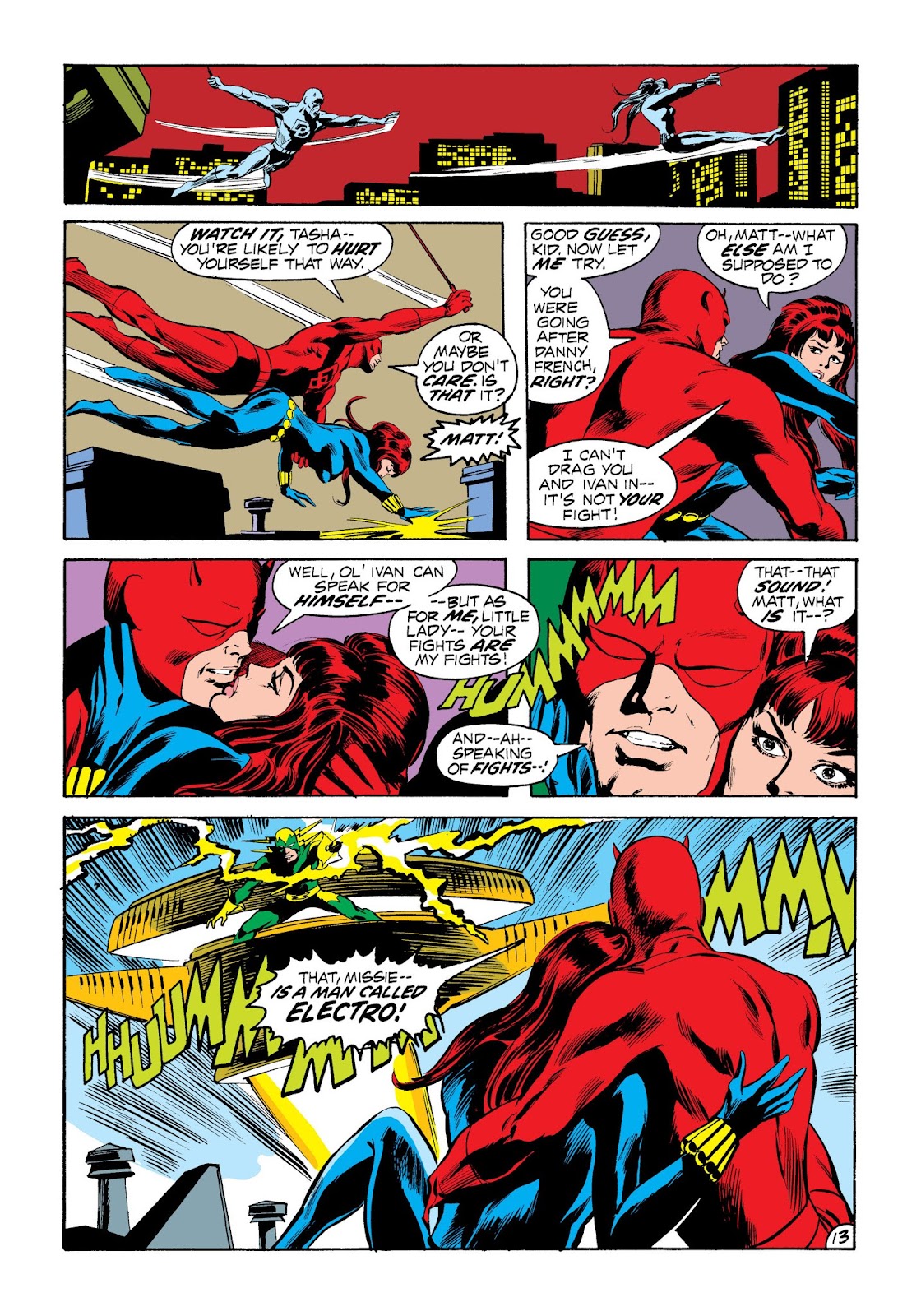 It’s a rare Marvel Masterworks edition presenting post-1960s material that only features the work of a single writer and a single pencil artist, but Gerry Conway and Gene Colan are responsible for everything here. Better still, Colan’s flowing pencils are inked by Tom Palmer on all but two stories, where Syd Shores and Ernie Chan’s contributions to the opening and closing chapters result in less alluring pages.

Daredevil Masterworks Volume 8 showed Colan’s usual polished performance and Gerry Conway feeling his way into Daredevil as a series with patchy results. This selection is far better even before Conway makes his major statement, beginning with a tense thriller on a plane where Daredevil and the Black Widow’s strengths are limited, then cleverly exploited.

Conway pairing Daredevil and Black Widow as both superheroes and lovers was something new for the early 1970s, and he treats them as a partnership of equals despite the odd moment of off-colour dialogue. Of course, there’s no ignoring the soap opera elements, and if erring toward melodrama, considering Conway was only just out of his teens at the time, there’s also a surprising sophistication. That’s best represented by the phasing out of long term love interest Karen Page. Later differences between Natasha and Matt at first seem contrived just for drama, but keep faith in Conway, as there is an explanation.

Natasha had been based in San Francisco for some while, but it’s new territory for Daredevil, and the city is attractively presented by Colan, both external and interior locations differentiated from New York. The car chase scenes are sumptuously cinematic, Colan drawing what are now classic motors tearing through the city and surroundings, and Palmer inking far more sympathetically than in Volume 8.

As Conway’s introduction mentions, a surprising number of Daredevil’s old foes have also relocated, and while they keep Daredevil busy, Black Widow is greatly concerned about a name from her past. The suspense about that is prolonged too artificially, and the eventual disclosure is arbitrary, but it pays off merging her world of spy drama with Daredevil’s superheroic crime fighting. Foggy Nelson is discarded along the way, but replaced as primary supporting character by Natasha’s more proactive protector and companion Ivan. Other surprises are better played out, with the misdirection about a villain’s identity still shocking as intended, and although for a while it seems as if both the prominent Matt Murdock and Daredevil moving to a new city threatens their identities, Conway has planned for that also.

Tongue in cheek narration appears gradually, and may not be to all tastes, and some of the 1970s dialogue and attitudes have certainly dated, but give them a little leeway, and these are stories that stand up better than expected. They’re also available in black and white as part of Essential Daredevil Vol. 4, which may prove the better bet, not only for the crisp art reproduction but because this edition is out of print and commanding extortionate prices. Amazon will only supply the digital edition.