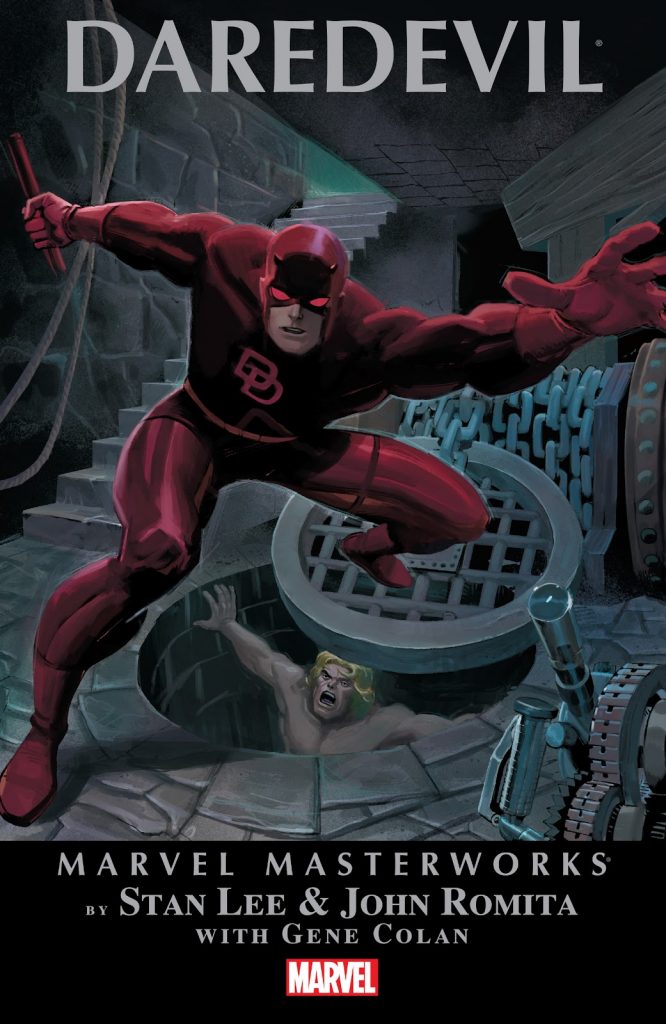 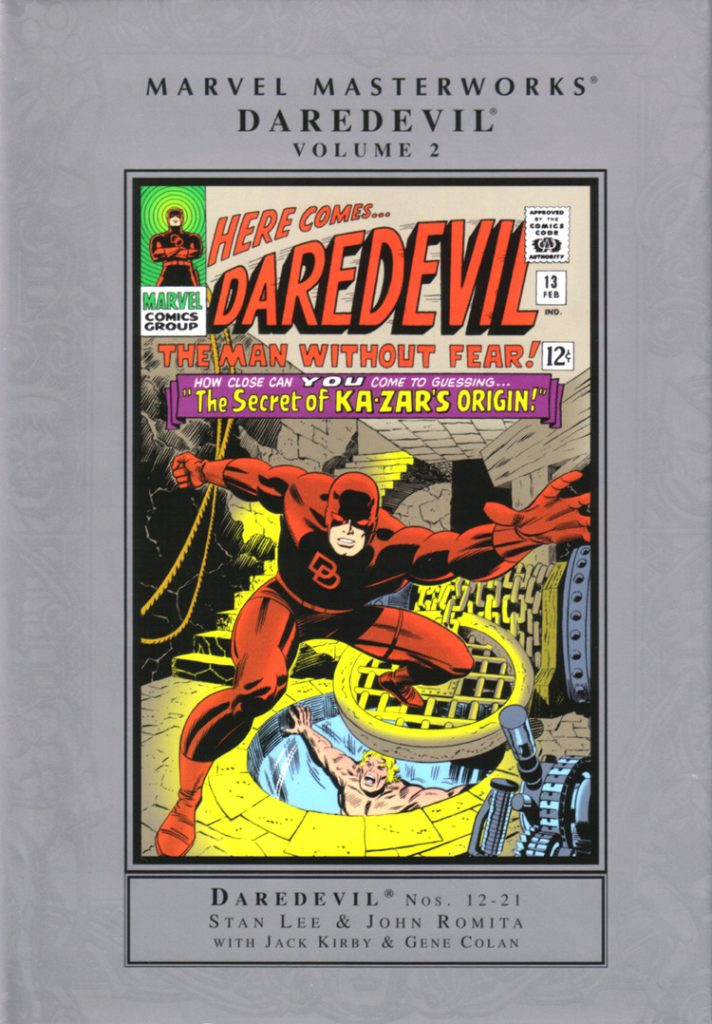 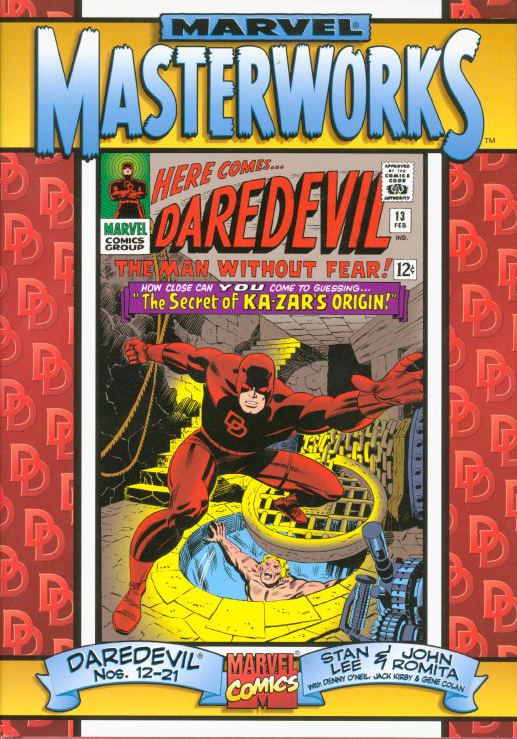 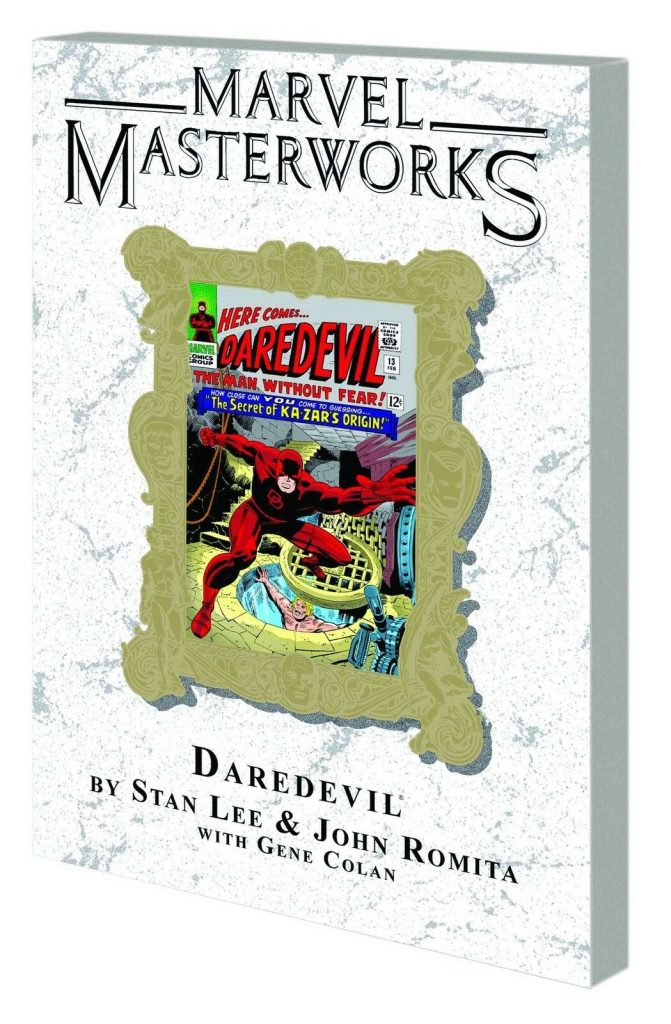 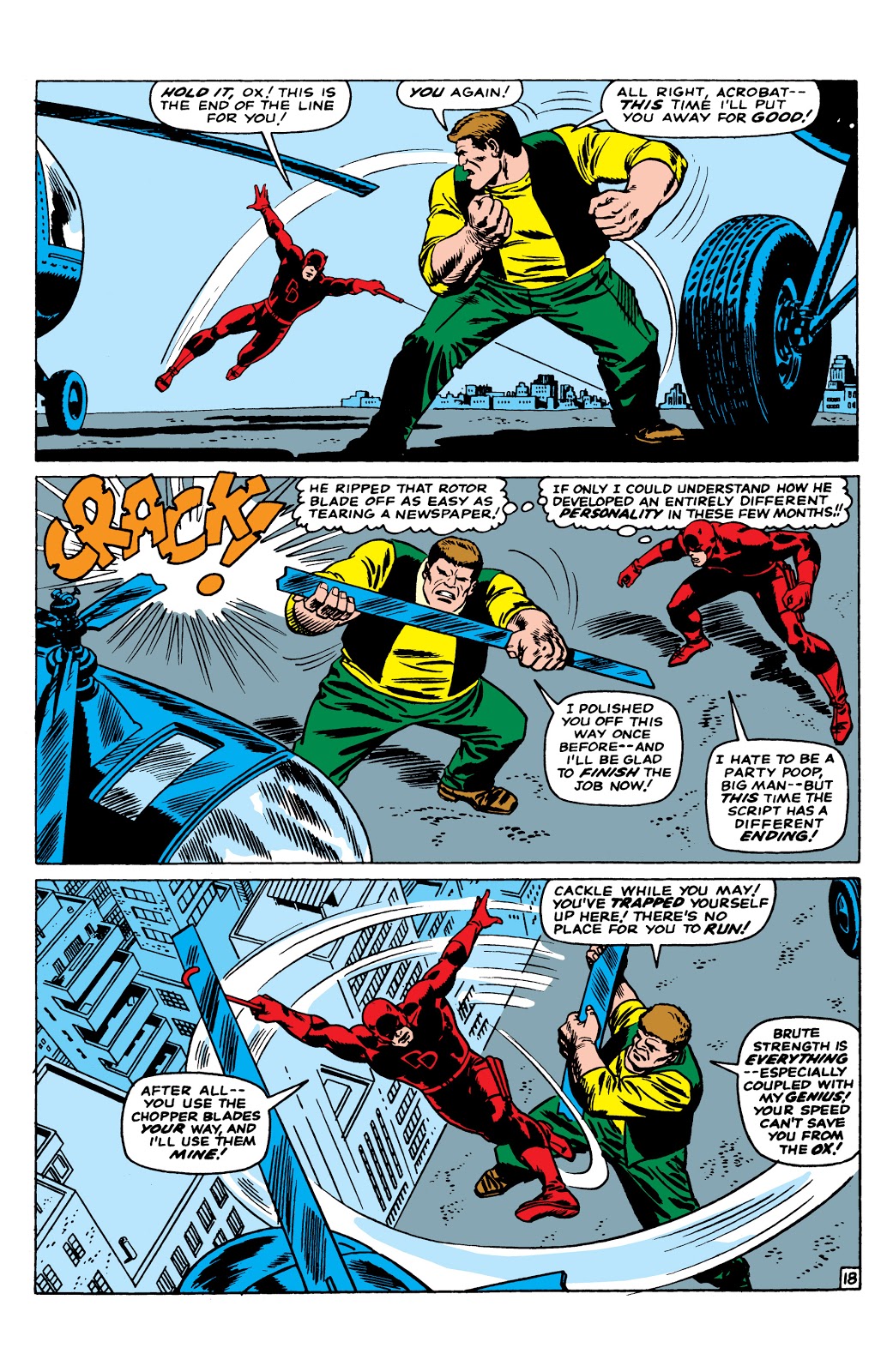 Matt Murdock is a blind lawyer whose remaining senses hyper-compensate, enabling him to perform astonishing acrobatic feats and fight like a demon as Daredevil. He is a formidable battler for justice in both identities and a living lie-detector.

Needing yet another new penciller, Lee turned to an old friend who would become Marvel’s top – and most loyal – artist. When interviewed in later years John Romita, who’d spent years drawing romance comics, revealed he was uncertain about whether he was the right fit for superhero work, and had Jack Kirby lay out his first strip. ‘Sightless, in a Savage Land!’ took Daredevil on an epic quest, guest-starring Tarzan-analogue Ka-Zar, ranging from the dinosaur-haunted Savage Land via an extended battle with high-tech pirates led by The Plunderer to Jolly Olde England-land and ultimately to a US Early Warning Base. With this multi-part globe-girdling epic, Daredevil began to confirm his persona as a wisecracking Scarlet Swashbuckler, one that would carry him all the way to the grim ‘n’ gritty Frank Miller days, far, far in the future.

Romita’s graceful, flamboyant style and expressiveness combined with the graceful inking of Frank Giacoia provided new energy, ‘…And Men Shall Call Him… Ox!’ showing the artist’s facility for explosive superhero action. The dim strongman resurfaced in a new and sinister fashion as the subject of a macabre brain-swapping experiment. When a certain Spider-Man guest-stars, little did anyone suspect how soon Romita would be leaving. Criminal mastermind Masked Marauder has big plans, the first being to get DD and the wallcrawler to kill each other. That’s followed by ‘None are so Blind…’, Lee starting a convoluted a subplot leading to some of the highest and lowest moments of the early Daredevil series, beginning after the wondrous wallcrawler accuses Foggy of being the Man Without Fear! Although the webspinner quickly realizes his mistake, others present don’t.

Another bombastic title, ‘There Shall Come a Gladiator!’ introduces a manic armoured villain and archetypal super-thug in a tale two-thirds scripted by legend-in-waiting Denny O’Neil. Here Foggy tries to sway Karen by bolstering the idea that he is Daredevil, almost perishing as a result of the deception. Then the Masked Marauder allies with Gladiator in action-packed big fight tale ‘Alone… Against the Underworld!’, a fitting farewell for Romita whose career can be picked up in the fifth Amazing Spider-Man Masterworks volume.

Originally just tipped for a fill-in issue, Gene Colan pencils ‘The Verdict is: Death!’ and remained Daredevil’s regular artist for seven years. Colan’s superbly humanistic drawing and facility with expressions is a little jarring at first as he drew Daredevil in a passable Romita imitation and everything else in his own manner, but he soon settles in. This two-part revenge thriller featuring the Owl is a fine beginning to his long, impressive run, incorporating the Sightless Swashbuckler’s battle against his ferocious arch-foe, an army of thugs, deadly flying robots and even an exploding volcano to keep the readers on their toes.

Romita, then Colan provide artistic consistency, and their talent ensured flowing action scenes and attractive looking civilians. Lee’s plots continue to engage, with the caveat that the constantly twisting love triangle between Matt, Karen Page and Foggy Nelson is beginning to slip into soap opera melodrama. This content is also found in black and white in Essential Daredevil Vol. 1, or within the oversize Daredevil Omnibus, which also contains volume three.