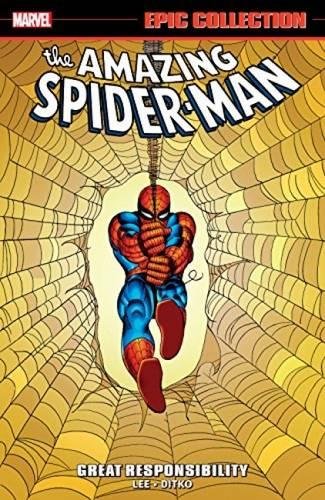 Continuing from the earliest Spider-Man stories presented in Great Power, Great Responsibility sees co-creator Steve Ditko assuming more and more control over the strip until Stan Lee’s writing credit only applied to his adding the dialogue.

This is far stronger material than the introductory volume, although it takes until a quarter of the way through before there’s a consistency. Both creators now have a sure handle on Peter Parker, Spider-Man and his supporting cast, and some elements that Lee and other writers would later over-use (Aunt May Parker’s failing health for one), are here relatively fresh. Ditko’s greatest iconic moment, embodying his ideas of what constitutes a hero, is prompted by Aunt May’s condition, as Spider-Man is spurred by thoughts of her poor health to summon superhuman strength to escape an impossible situation. Originally written in 1965, this sequence has survived revisions, re-tellings, imitation and homage to pack an emotional punch in the 21st century. It’s the best moment here, amid a good adventure that isn’t quite the best story.

While Spider-Man himself was an interesting character, what truly embedded him in popular culture was the application of soap opera sub-plots, and these are superbly handled. The mystery of a new ganglord named the Crime Master is beautifully perpetuated, and explodes in a brilliantly seedy, almost crime noir story set in old-fashioned docklands and strongly featuring the Green Goblin. Other highlights are the aforementioned Master Planner tale, Spider-Man visiting the psychiatrist, a trippy teaming with Doctor Strange, and the introduction of the Molten Man. His is an almost forgotten story amid the more renowned material, but it exemplifies the strengths of the strip in the Ditko/Lee era. The Molten Man was the result of the unfortunate chemical dowsing so common to comics of the era, enabling him to generate extreme heat from his now metallic skin. This is a Ditko plot, so he’s an irredeemable career criminal whose new status merely escalates his activities, but what makes his story compelling is the master stroke of connecting the Molten Man to one of Peter Parker’s friends.

Ditko expands that supporting cast by moving Peter Parker from high school to college, and there introducing Gwen Stacy and Harry Osborn, both significant for years afterward. If there’s a supporting cast member Ditko loves it’s newspaper proprietor J. Jonah Jameson, consumed with jealousy about Spider-Man and not beyond financing menaces endangering the public to satisfy his misguided ethics. Ditko illustrates a great raging Jameson, yet somehow renders him even scarier when he’s happy.

Ditko’s a supernaturally gifted storyteller, and an element he brought to Spider-Man that almost no artist has managed since is the pure awkwardness of the character. Ditko contorts Spider-Man into impossible poses, and his Parker is a credible nerd. What shouldn’t be forgotten, though, is Lee did contribute. As seen by his later material, a lightness of touch when it comes to bantering dialogue just isn’t part of Ditko’s armoury, and Lee’s sparkle brings the cast to life.