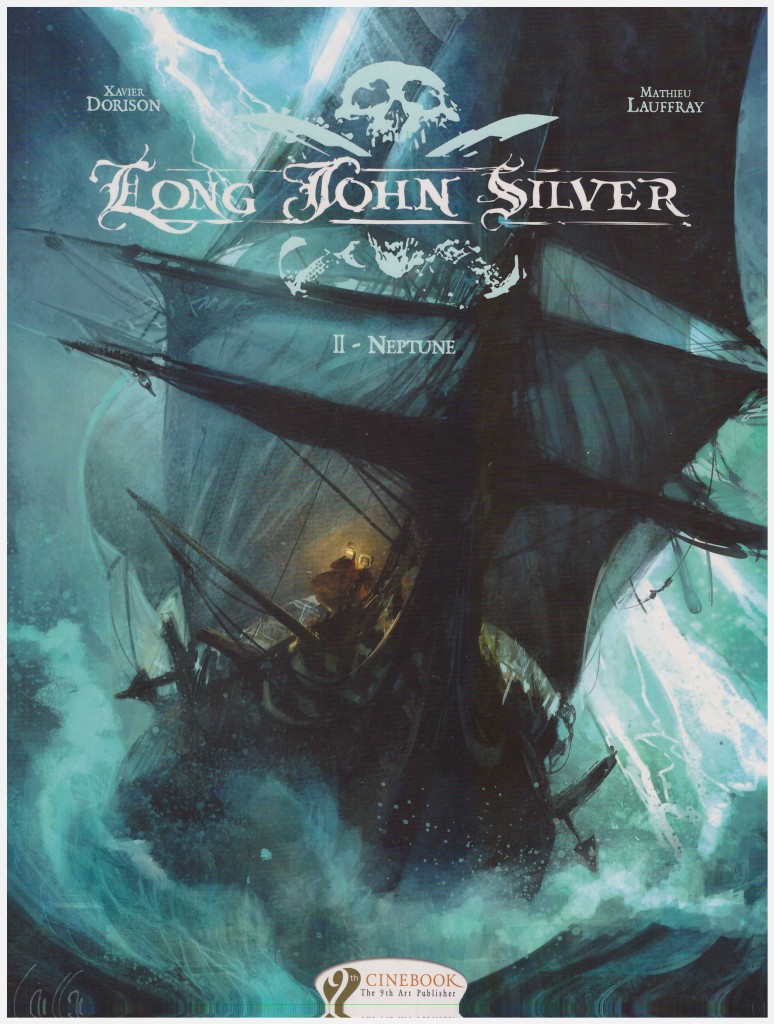 It might be considered quite the conceit to appropriate an iconic out of copyright character for your own story, but on the basis of the two volumes so far, Xavier Dorison and Mathieu Lauffray are doing Long John Silver proud. They remain true to his character as established, yet surround him with their own fixtures and fittings. Lady Vivian Hastings was more about setting up a novel, but during the course of Neptune the spotlight settles on Long John.

The opening book set the scene, so Dorison now provides the full scheming Long John. He’s manipulative and wily, yet not at all concealed to the ship’s captain whose insightful character assessments nail him: “You plot, you scheme, always in the shadows. Keep spreading poison in the minds of the deckhand”, and later “the last of a line of beggars disguised as heroes. All your people have perished by my hands or the hands of my peers”. Seeing as the book isn’t titled Captain Hastings, that’s not quite how things progress, but Dorison makes a powerful statement in explicitly telling us what his protagonist is.

While complementing the writing, a nod should also go to translator Jerome Saincantin. There’s never the slightest hint that you’re reading a translation, and we’re dealing with some complex language as Dorison deliberately attempts to emulate the style of Treasure Island.

As is the case with all good pirate stories, the ultimate carrot is enrichment, and the entire book is set on the Neptune of the title, a ship sailing to South America because the legendary el dorado hoard of gold has been located. Lauffrey’s depiction of the prevailing environment is fantastic. There are hints of Joe Kubert about his character designs, and he slathers on the shadows for scenes of the ship at night. This is a pirate story, so requiring quantities of blood, and Lauffrey’s not shy with it. There’s plenty of opportunity for violence on board, both officially sanctioned brutality and skullduggery, and Lauffrey’s cinematic approach is very drama-oriented.

Long John Silver isn’t the only character from Treasure Island appearing here. We also have Dr Livesay, a man fatally compromised by his silence in the opening book. In contrast to others, he’s unsure of his motives, and therefore a wild card. His hand-wringing is well portrayed.

This is a transitionary episode in terms of the ongoing plot, but delivers the full dose of action amid the fine character study. This is both in the battle of man against nature and man against man’s baser instincts. For all of Hastings’ claim to refinement he’s also lured by gold, but bolsters his superiority by claims that his intended spending is somehow civilised.

Some characters from the first book are all-but sidelined here, yet obviously have a part to play. Long John Silver remains a thrilling page-turner and continues in The Emerald Maze.