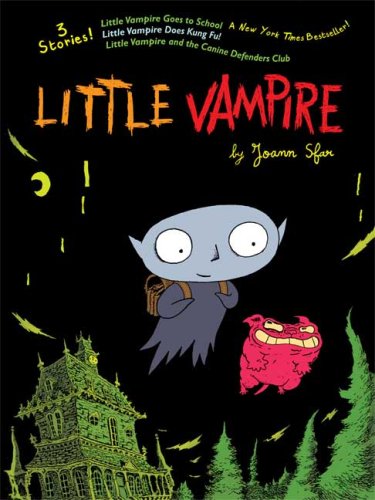 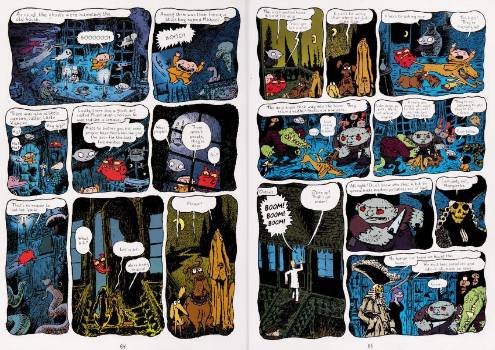 That begins when two dogs being chased find their way to the monsters’ haunted house. It’s not long before they’re recaptured, but by then their story has touched the monsters’ hearts, with Little Vampire’s ghost dog Phantomat the angriest, so Little Vampire and pals set off to the rescue. In Little Vampire Goes to School Little Vampire met human boy Michael, who was the lead character in Little Vampire Does Kung-Fu. Here Sfar’s notably well designed supporting cast have a larger role, with some great coarse jokes, Marguerite wheeling around a wheelbarrow of poo in case it comes in useful being one of the best. It does prove useful, of course.

Follow the links for broader reviews of the other stories, but all three provide solid, funny entertainment. Sfar’s author biography describes him as a force of nature, and that’s borne out by his wild cartooning, every page packed with joyful characters and great little details. There is a level of monsters being designed to frighten children slightly, but no matter how gruesomely they’re designed, Sfar’s cartooning gives them a charm and ensures they’re not too scary for an all-ages readership. Little Vampire himself is so cute you can imagine the cuddly toy, this despite his being a scaled down version of Murnau’s Nosferatu, bald-headed and in a gray shroud.

The stories weave from one wonder to the next, Sfar’s usual discursive storytelling methods here not interfering in the slightest, as readers of any age will enjoy the discoveries to be made on following where his imagination leads. In the first story, that’s to school, Little Vampire befriending a human child whose homework notebook he fills every night while learning. Michael is the focus for the second story, learning kung-fu and discovering the school bully might have even larger problems.

Sadly, these three stories remain the only Little Vampire offerings translated from the French, even a 2020 film adaptation not prompting the remainder in English. Anyone able to read a major European language will find the remaining four Little Vampire stories just as enjoyable.