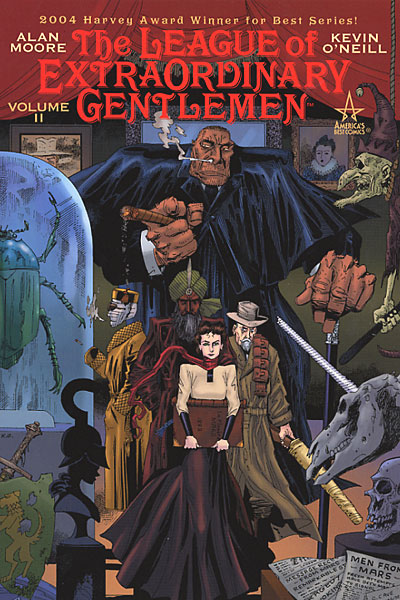 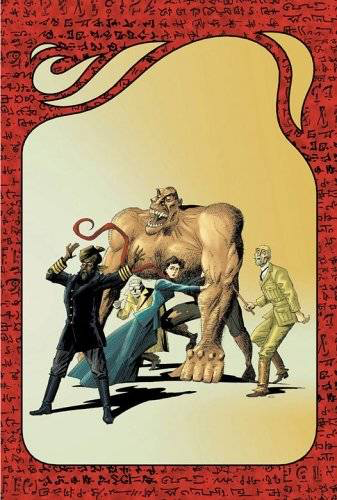 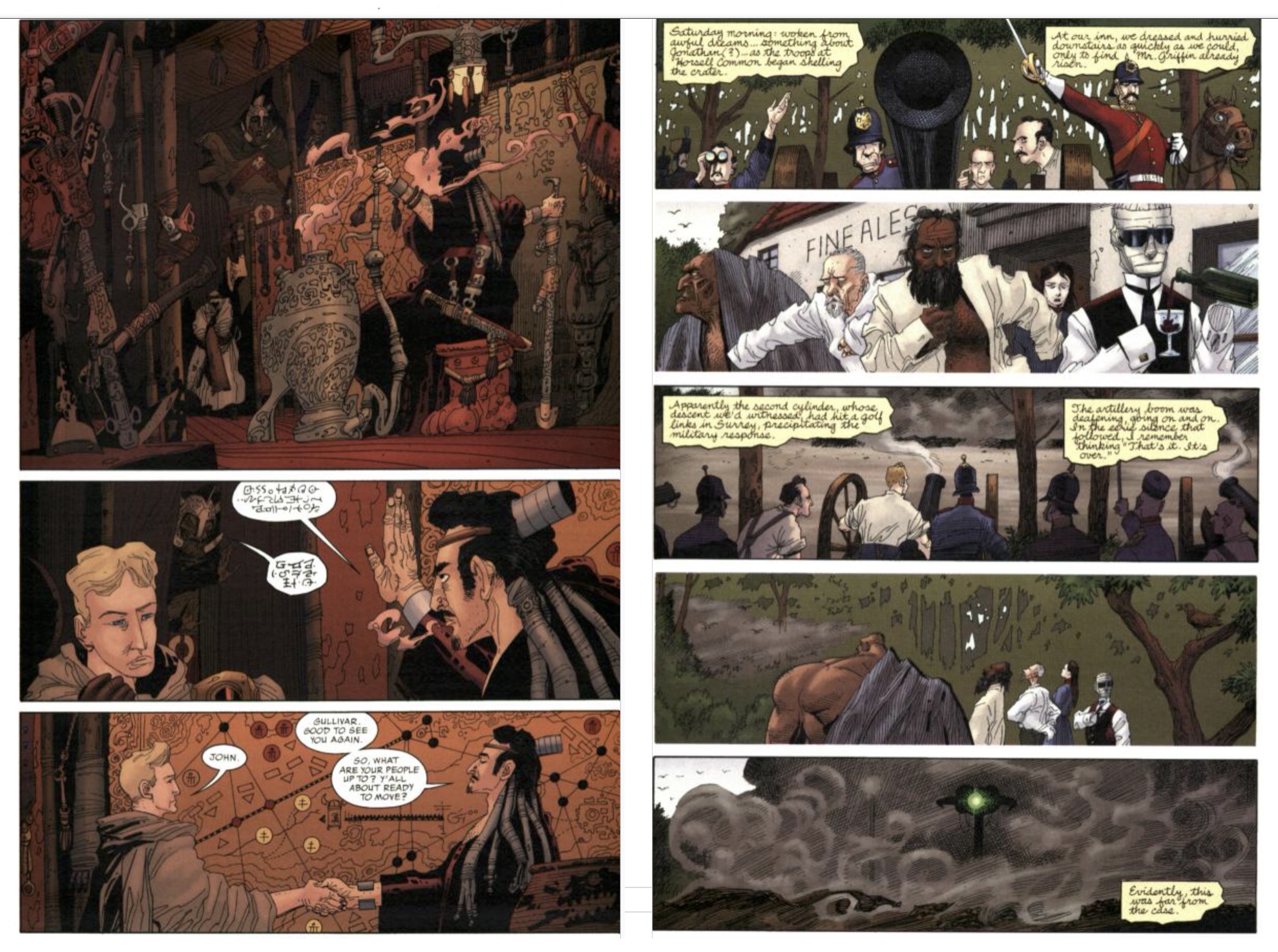 League of Extraordinary Gentlemen has a killer premise: if Marvel and DC superheroes can interact in their respective shared universes, why can’t all fictional creations?

The League gathers proto-superheroes from Victorian fiction. This includes characters with ‘super-powers’ (Jekyll & Hyde), or ‘touched’ by the supernatural (Mina Murray from Dracula); or from serial adventures (Allan Quatermain and Captain Nemo). Volume 1 of Alan Moore and and O’Neill’s series lived up to it’s promise.

This second volume, though, is a more difficult proposition. The first chapter is set on Mars, and brings together various fictions of the planet, including John Carter, his fore-runner Gullivar Jones, and the Séroni from C.S. Lewis. It’s effectively a prologue, setting in motion the invasion of Earth by one faction of the war on Mars. Most of the dialogue is in alien languages without translation (pictured left), and the League only appear in the final pages, as the alien craft land in Britain. It’s a bold opening, that perhaps no one but Moore could have sold to editors. As the start of a pamphlet series, some readers may have stopped reading there, but that’s less of a problem in a collected edition, and the following episodes restore Murray and her ‘menagerie’ to centre stage.

While the series draws on countless authors, this volume favours H.G. Wells. Volume 1 had Hawley Griffin (Wells’ Invisible Man), join the team in their mission to secure the gravity defying substance Cavorite, also a Wells creation. Here, alien landings signal the start of The War of the Worlds, which provides the narrative spine of this volume. Episodes two and three, feel too straightforward an adaptation of Wells’ book. However, thereafter, Moore pulls a new twist on the overlapping story-worlds premise: connecting elements across Wells’ novels. Griffin’s reaction to his invisibility (exacerbated by incidents within the team), culminates with him taking a key role with earth’s invaders. Wells’ Doctor Moreau created human animal hybrids, here wittily presented as anthropomorphic childhood favourites, like Rupert Bear and Babar the elephant. Moore involves Moreau in a twist to Wells’ fall of the aliens that’s ingenious and shocking, and reflects both authors’ critique of the British establishment.

Stepping back from the dazzle of the premise, Moore’s narrative originality and psychological acuity still impress. He treats the League not just as brand names, but characters bringing backstories that shape their actions: Mina’s violation by Dracula; Quatermain’s loss of his family; Hyde’s lack of both inhibition and empathy; and The Invisible Man’s self-centred alienation. These drivers shape their actions in ways that are sometimes tender, sometimes cruel, but always both credible and surprising. Still more impressively, this is conveyed through visuals and dialogue, without narration, to reveal characters’ inner lives. If at times it feels more like a series than a novel, that’s a minor quibble.

Kevin O’Neill’s art is similarly extraordinary, combining a flair for character, vivid settings and props, and composition, (featured images). Ben Dimagaliw’s colouring still impresses, though occasionally obscures O’Neill’s intricate details. This may be partly due to the printing, with different editions making the colours either too dark or too bright in places. The deluxe Absolute Edition suffers from high-gloss paper, and the increased size makes the half-tone dots intrusive, making it a poor buy.

All the series’ extras are gathered here, including original covers, text pieces, and even a board game, and the main story has since been incorporated into The League of Extraordinary Gentlemen Omnibus.

A few quibbles rate marginally this below Volume 1, but it’s nonetheless a hugely impressive and entertaining continuation of the series. The next step is Century: 1910.