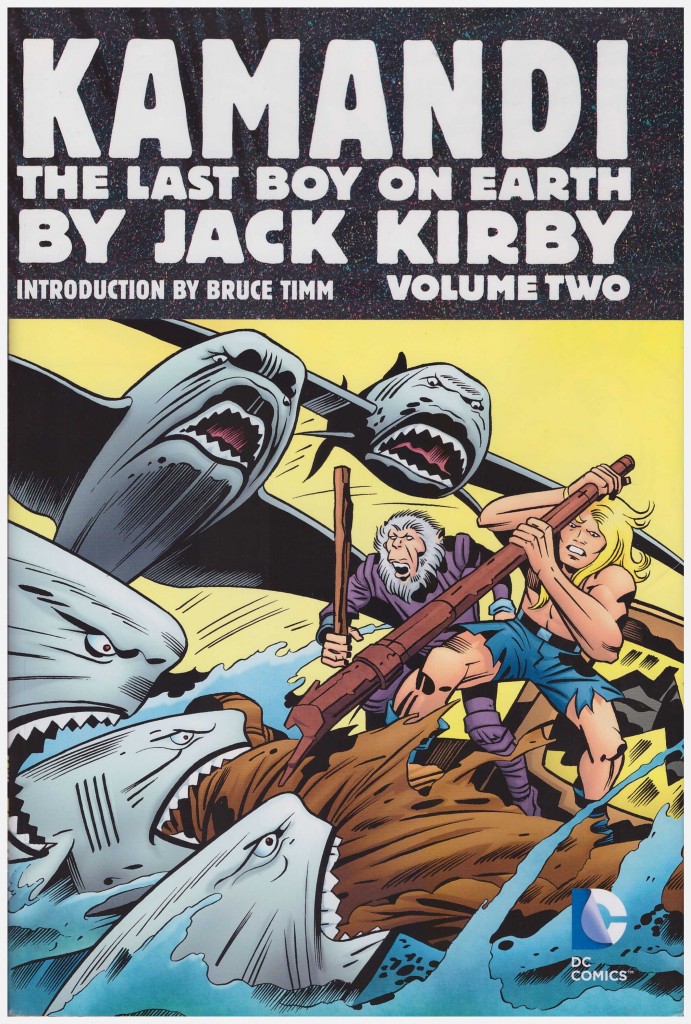 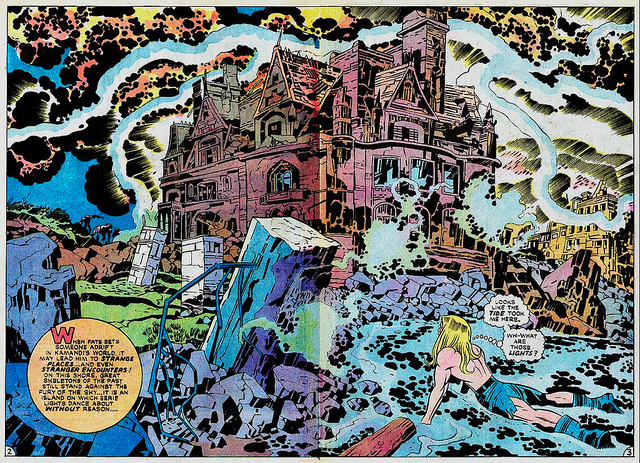 This 420 page volume completes Jack Kirby’s run on Kamandi, his post-apocalyptic series in which animals have become humanised. It’s almost all slam-bang inventive thrills, but towards the end of the 1970s work reprinted here Kirby was seeing out his days at DC knowing he’d return to Marvel. It would be unfair and incorrect to accuse him of hacking out the final chapters, but as he was no longer writing or editing the strip it would be fair to say his heart was no longer in it.

An element Kirby mastered, and many today could learn from, is starting his stories in a manner instantly offering action and intrigue. The opening pages here have Kamandi believing he’s found a decent fishing spot, yet he encounters a man in an armoured suit fending off half a dozen samurai warriors, this delivered in a single page illustration followed by a great double page spread. Who this man is and what he’s protecting leads into an investigation of how the Great Disaster affected life beneath the sea, and the return of some old friends. Thankfully Kirby’s covers to all original issues are also supplied, as this sequence includes one of his best ever as a killer whale, occupying fully half the cover swims directly at Kamandi mouth agape screaming threats of revenge.

Kirby delivers these stories at breakneck pace, constantly shifting environment and threat, sometimes mid-story. After emerging from the sea Kamandi visits a haunted house, a radioactive wasteland and lands in the middle of mad stand against overwhelming forces led by a British bulldog. Kirby then addresses Superman’s absence in his Earth After Disaster via a tribe of apes who maintain his legend. It’s a clever story that can be taken at face value or interpreted as representing a myth.

That’s followed by an extended section involving a disembodied alien and a war between tigers and gorillas, into which Kirby manages to incorporate the fate of the final Soviet astronaut and a new female companion with fiery powers. It wouldn’t be until Axe Cop that a similar unfettered creative imagination was unleashed on comics.

It seems as if the pace and excitement are unceasing, but then DC’s editorial intrusion begins. Kirby is replaced as cover artist and the immediate internal manifestation is the scaling down of his art. There are no further double page spreads, and fewer single page illustrations, but the stories themselves don’t suffer otherwise, as proved by a whimsical look at how a hotel might be run in the world the way it is.

Gerry Conway becoming writer as well as editor for the final three chapters results in superfluous detailed explanation of events that Kirby had left to the imagination. Other than that, though, given the richness of the playground Kirby’s already created, there’s enough scope for Conway to supply material that matches the tone of the series to date. That same scope enabled the series to continue for two years following Kirby’s departure.

The first volume of this series is better by virtue of the freshness, Mike Royer’s stronger cohesion inking Kirby’s pencils, and including the best Kamandi stories of the run. This, though, is no mere following ghost, and around 75% of the content is Kirby writing and art hovering near his 1970s peak. The stories are also available in an oversized Omnibus edition.