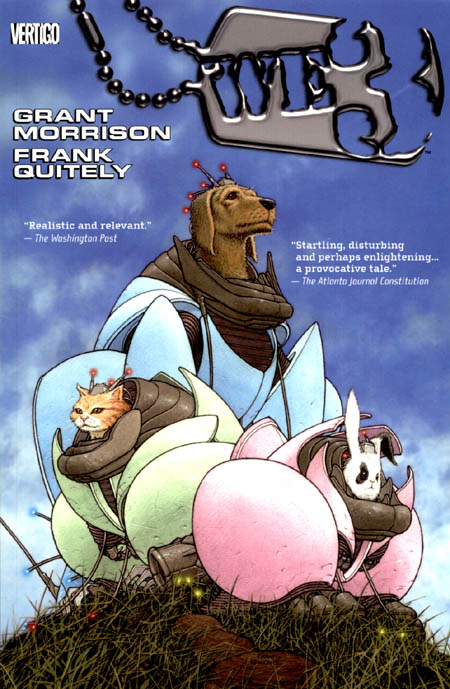 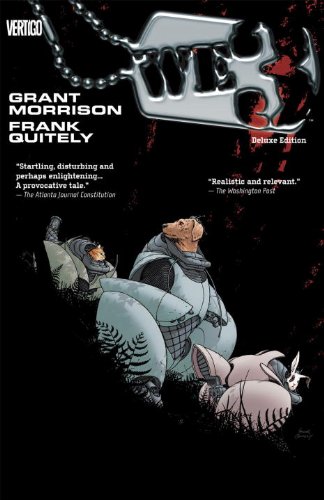 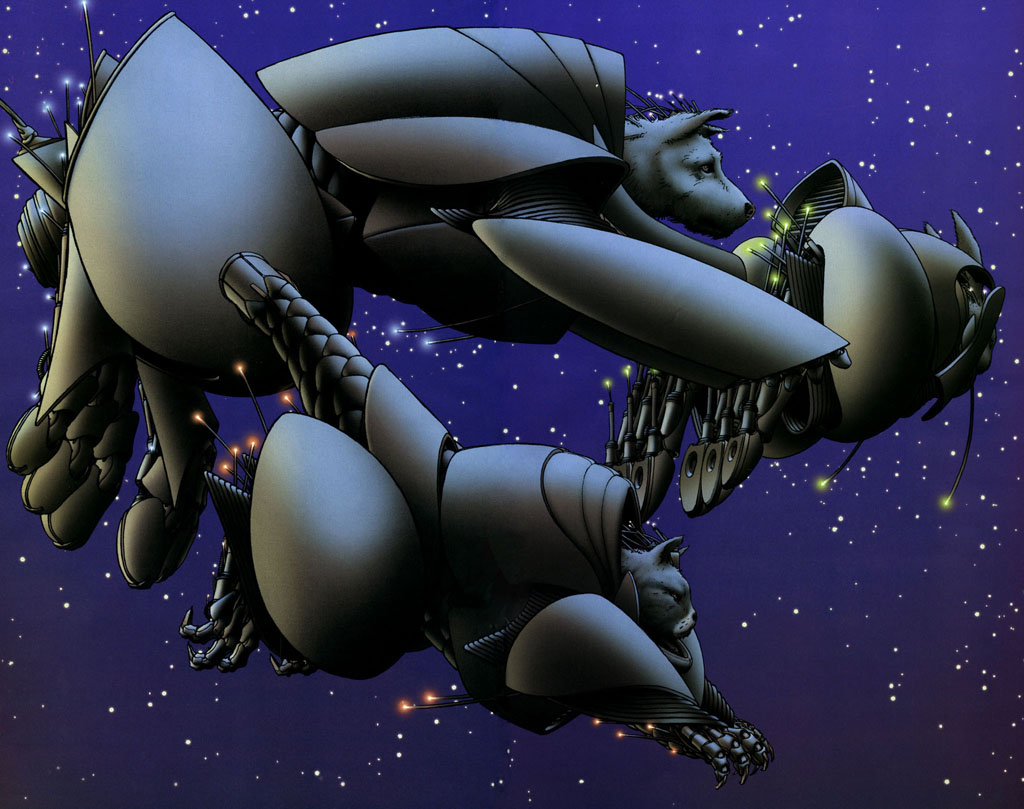 For all the excellent material Grant Morrison has written over the years, he could never have previously been considered to possess a streak of sentimentality applying to anything other than the comics he loved growing up. Yet We3 is explicitly calculated to be his cinematic tearjerker. This, though, is Morrison, so it’s no saccharine confection no matter how sympathetically Frank Quitely presents us with doe-eyed animals.

What we have here is the horror of animal experimentation ramped up to extremes. We don’t need the science explicitly explained to be appalled at our opening sight of a dog, a cat and a rabbit encased in armour, electrodes and wiring protruding from their heads and jacked directly into their brains. Among other perceived advantages, this abhorrence enables them to communicate verbally in basic terms. It’s visceral, brutal and shocking, as intended.

The justification for the experiments is that these animals are a military project, financed to create killers able to access otherwise inaccessible areas. Anticipating the military mindset, Morrison has the armour incorporating immense firepower. It would be unfortunate, then, if they found their way to freedom.

Given that the tale remains true to the intellectual capacity of the animals, Morrison admirably conveys both character and instinct via minimal snippets of dialogue, while throwing them into what’s not far removed from a Bruce Willis style action thriller.

Everything is impeccably illustrated by Quitely, varying his storytelling according to mood and action requirements. The scene of the animals’ escape is supplied entirely by depictions of security camera footage, six pages of it at eighteen panels to the page, before opening out into a stunning double page spread. It’s one of several memorable large images throughout. The sequence was presumably Morrison’s concept, but could any other artist have realised it so well? The digital inking and colouring of Jamie Grant is particularly effective here. Quitely also has an astonishingly light and capable touch when presenting the emotions the animals experience, without crossing the line into cartoon anthropomorphism.

A brilliant bonus layer to tug at the heartstrings is provided by the covers to the original comic serialisation. Each of the spotlighted animals is shown to be an abducted domestic pet via the type of appeal stapled to pylon poles or distributed around the neighbourhood.

Morrison obviously intended We3 to provoke some thought as to current levels of vivisection and animal experimentation, but this isn’t hammered home in bleeding heart fashion. The hypocrisy of the entire project is noted, along with the ethical compromises even the more sympathetic human cast members have made. First and foremost, though, We3 is a cracking good story, excellently drawn.