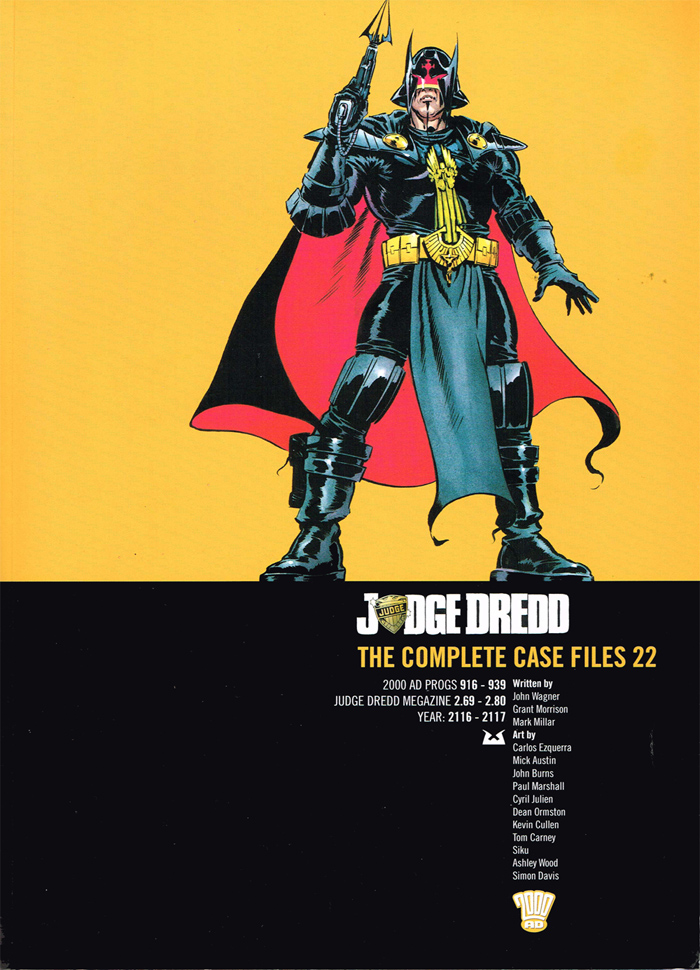 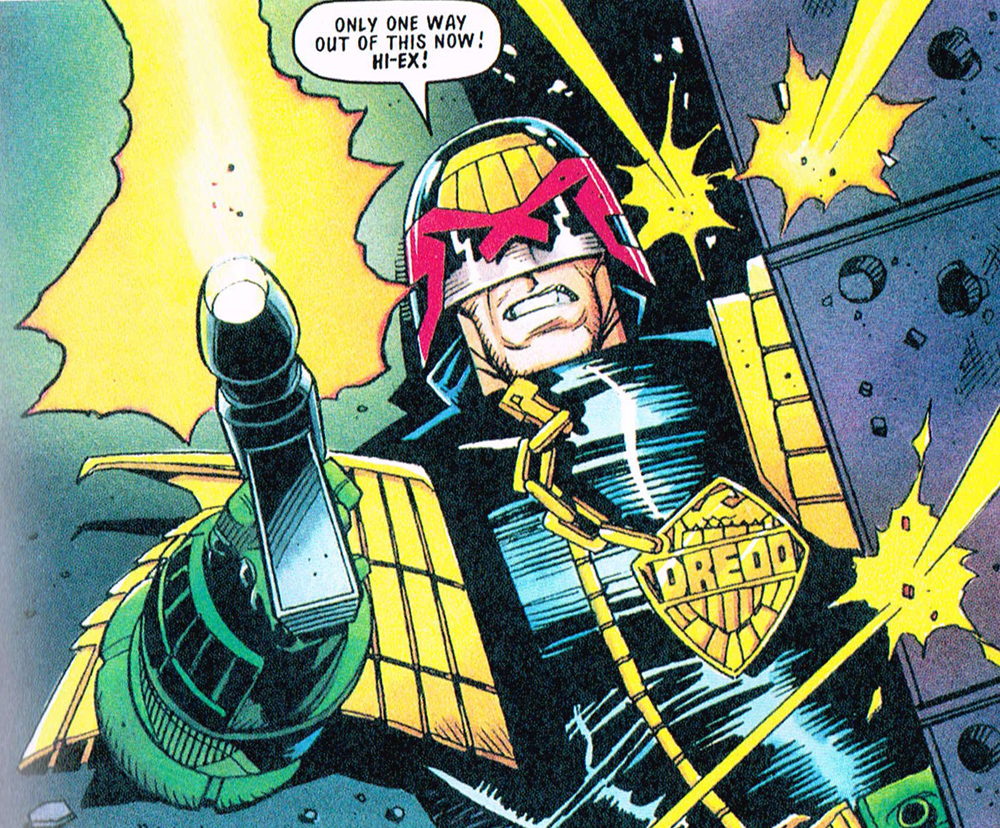 Case Files 22 contains fifteen tales, with all but a handful written by John Wagner. So, unless noted otherwise, everything’s by Wagner.

The 2000 AD section begins with ‘The Candidates’. Mick Austin’s art works on the first half of this tale, but Carlos Ezquerra does a poor job on the second, with atrocious Photoshop colouring and effects. He’s also responsible for the artwork in the following story, ‘Voting Day’, which continues with the same democracy storyline. Thankfully the artwork is far superior, and his use of filters is quite effective in places.

Peter Hogan writes ‘The Big Sleet’, with art by Ross Dearsley (whose Dredd is almost as bulky as the Hulk) and Dermot Power. This fun eighteen page story features Norse gods, showing yet again how versatile the strip can be.

‘The Exterminator’ is nine chapters with excellent art by John Burns and Emilio Frejo, whose style complements Burns’ beautifully. Dredd travels back in time to wipe out an alien threat in a tale that cheekily and blatantly riffs on The Terminator, while effectively stealing its plot. This is a great story, though the fact Dredd is the protagonist is neither here nor there, the story would have worked just as well with Strontium Dog’s Johnny Alpha, or pretty much anyone else.

The longest tale in the collection at sixty pages, one longer than the previous story – is ‘Crusade’, written by Grant Morrison and Mark Millar. Mick Austin’s artwork is okay, but this is a strong contender for the worst long Dredd story ever: macho bullshit by two writers who really don’t get Dredd.

‘Escape from Kurt Russell’ has nice Paul Marshall art, and a story that we’ve seen before (it’s basically the plot of the Dredd movie). However, it’s well executed and ably demonstrates how unstoppable Dredd can be.

The Megazine section kicks off with the fairly amusing ‘Crash Diner’, featuring sub-standard artwork by Cyril Julien. Si Spencer writes the next two tales, ‘Fall of the House of Esher’ and ‘A Very Creepy Christmas’. Dean Ormston’s art, and the fact the writer quotes Poe, salvages the first, but Kevin Cullen’s awful art on the second is matched only by the atrocious plot.

‘Addiction’ has amateurish artwork by Tom Carney, and a twist that might surprise someone who’d never read any Dredd before. ‘The Strange Case of Bill Clinton’ is far stronger with attractive artwork by Siku, and elements that promise further developments.

‘Skar’ is drawn by Ashley Wood, and while he’s undeniably talented, he can’t tell a story. The plot isn’t much cop either, with another citizen infected and transformed into a vicious monster: something of a frequent occurrence in Dredd’s world.

‘Poor Johnny’ has interesting (in a good way) art by Steve Sampson, and Simon Davis provides the art for the penultimate chapter, the ‘The Secret Life of Judge Pal’. Davis is talented, but his stuff is unpleasant to look at, with everyone sporting permanent rictus grins and just looking downright creepy. The story’s good though.

The final tale, ‘Terror With Mrs Gunderson’, has great Jason Brashill art that enhances the atmospheric plot, and Wagner ends the collection on a high note as Dredd is forced to come up with a solution that doesn’t involve shooting someone.

So, another mixed bag, with artwork that often disappoints and stories that are sometimes re-treads of old plots or just simply terrible. Though, as always, there’s much to be enjoyed here too.

‘The Candidates’ and ‘Voting Day’ are included in Judge Dredd: Wilderlands.