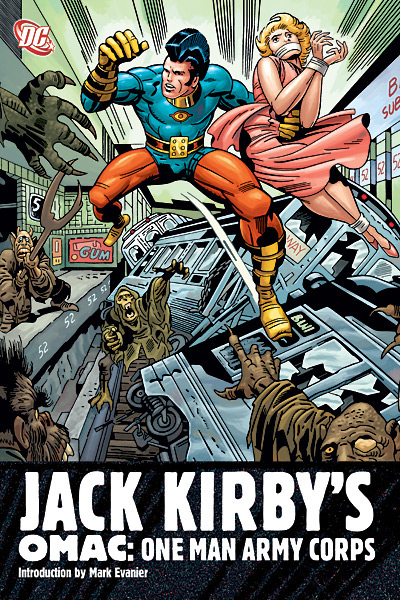 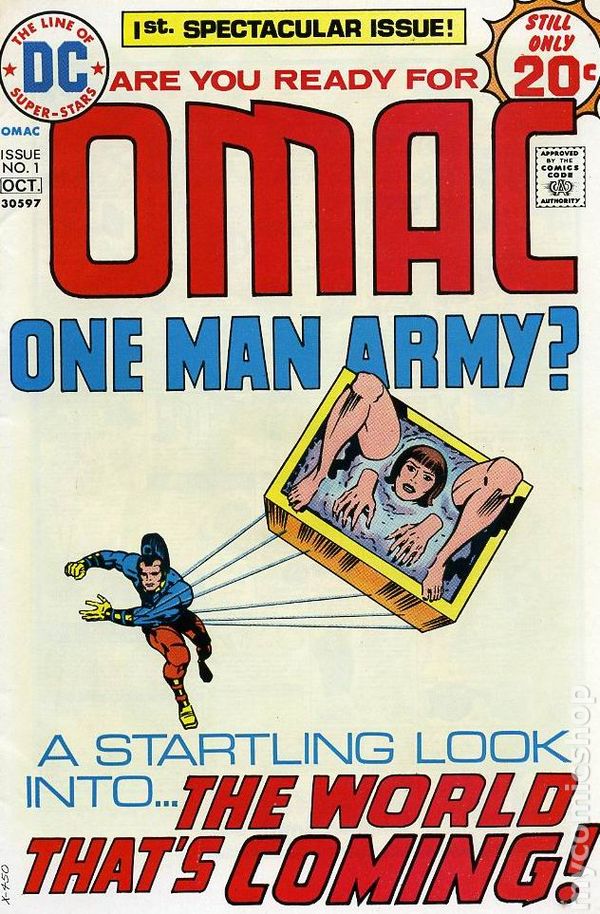 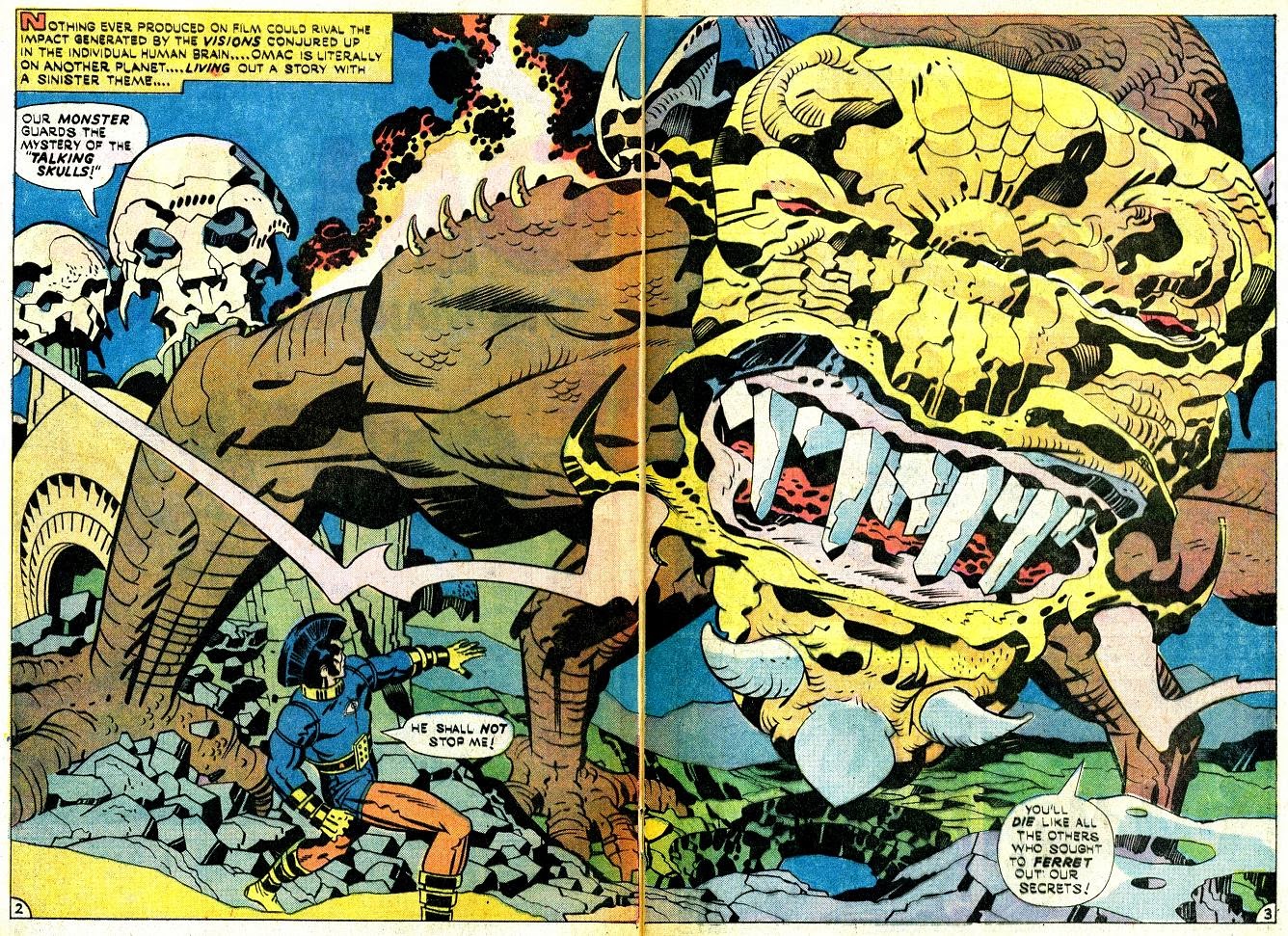 Perhaps Dan Forzano best summed up OMAC in his one line Amazon review: “It’s crazy, it’s brilliant, it’s horrible, it’s fun, it’s preposterous, it’s a train wreck… it’s Kirby.” It is indeed, all of those things, but as the advertisement says: It’s More! From story to art, OMAC is Kirby’s most abstract series of the 1970s.

According to Mark Evanier’s introduction, Kirby originally conceived OMAC as a new direction for Captain America. He had similarly conceived The New Gods as a new direction for Thor. Instead, he took both ideas with him to DC in 1970. In 1974 the cancellation of The Demon had left a hole in his schedule, so he dusted off his old Captain America idea, stuck a Mohawk on his head, mimicking the helmets of the ancient Greeks, and renamed him OMAC, an acronym for “One Man Army Corps”.

Buddy Blank is an even bigger nothing than Steve Rogers. When he isn’t being ordered around at Psuedo-People’s head office, he’s being bullied, beaten, and berated by his co-workers and supervisor. For some reason though, Lila has taken a shine to him, but when Buddy searches her out, he stumbles on a part of the business no one is supposed to know about.

Meanwhile, unbeknownst to Buddy, he’s been selected by the Global Peace Agency as the perfect candidate for Dr. Myron Forest’s super-cop program, Project OMAC. Without any permissions or notifications, Forest hooks Buddy up with Brother Eye, an orbiting satellite that rewrites Buddy’s DNA like so much computer code, transforming him into OMAC.

Policing Kirby’s “World That’s Coming” is no easy matter. Whether bringing down a corrupt billionaire and his private army, or bringing in a would-be conqueror with his own bio-terror weapon, OMAC and Brother Eye need to utilise all the tech at their disposal to keep Armageddon out of the hands of despots, psychopaths, and megalomaniacs.

It’s a tall order, and in the eight issues reprinted here we only get a glimpse of a future we have come to know too well: Holographs, virtual reality goggles, the super-rich, corporate control, the pursuit of immortality, youth, and beauty, and resource wars.

The series ends abruptly with the second part of a three-part story. Kirby had left the building and was already back at Marvel leaving Joe Kubert to supply a cover. Without a heroic conclusion, ‘Human Genius vs. Thinking Machine’ is an ominously dark and exciting finale as Scuba, an environmental terrorist, goes mano a mano with Brother Eye.

Kirby’s art is abstract and inventive, featuring covers designed mostly with type and figures floating in negative spaces. The majority of the series is inked and lettered by D. Bruce Berry, with two by Mike Royer. The stories can be trippy, even frightening, as Kirby throws ideas at the reader from all angles, the strangest being the nine-limbed Multi-Killer.

If The New Gods was too literate for comics in 1971, then OMAC was decades ahead of its time, and will certainly seem more familiar now than in 1975. Technology is fire in the hands of children, and Kirby foresaw a world with wealth, corporations, and technology operating simply for human profit and power, without accountability to any Rule of Law. The “World That’s Coming” needed OMAC in 1974. The “World That’s Here” could use him even more.

CODA: In Solo, Paul Pope re-imagined OMAC #1 with spectacular results, demonstrating what the character, in the hands of the right creator, could achieve. Link to that Five Star story, here. OMAC was later gathered into DC Universe: The Bronze Age Omnibus by Jack Kirby.