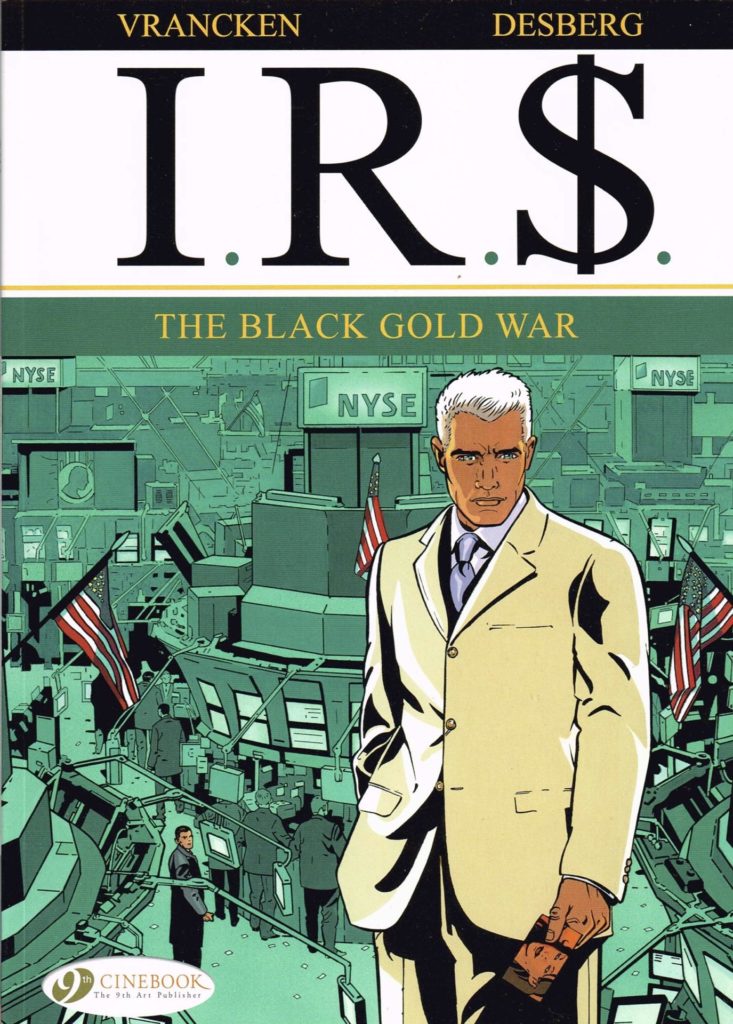 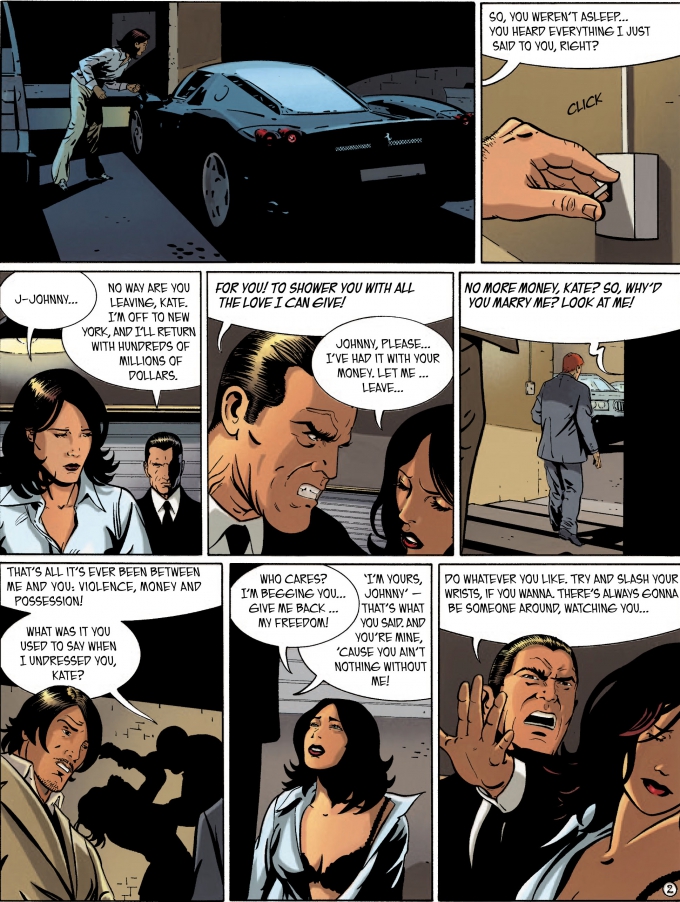 The Black Gold War, the sixth I.R.$. book, wraps up the story begun in the previous volume: Corporate America. The book opens with Kate Absynth (A.K.A. Gloria Paradise) attempting to leave her abusive and extremely violent husband, Johnny Madsen. He stops her, killing the guard who almost let her escape. This scene establishes quite clearly that she’s not merely in your run-of-the-mill abusive relationship, but instead a very real prisoner of a psychopath. Like most villains in this series, Johnny is an irredeemable bastard. A crook that made his money in oil, he’s already crossed swords with our protagonist, I.R.S. Special Agent Larry B. Max. This encounter is shown in flashback, when we witness teenage Larry’s first encounter with Kate, an actress signing to his father’s movie studio. Even at this stage Madsen, with his mucky fingers all over the studio, was scheming to possess Kate, and signs that things wouldn’t end well were already obvious.

Max’s relationship with Kate has been an integral part of these books since the beginning, as she appears in the very first scene. This is the volume that finally delivers on the promise of all those tantalising hints planted throughout the series that their relationship is destined to move to another level, even if that involves a high body count.

Writer Stephen Desberg manages to deliver on the promise of the previous book, though the terrorist attack on Saudi oil facilities section is a bit wordy. That’s because the actual attack is secondary to its ramifications. This means lots of news reports and scenes set inside the stock exchange, which are never going to be thrilling. While a great deal of this section consists of talking heads, the explosions are handled really well. Bernard Vrancken should draw more things blowing up, as he does it very well, and it’s some of his most impressive work so far.

However, back to the plot, and it transpires that the terrorist attack is anything but, the real motive behind the attacks is greed, plain and simple (shades of Die Hard). For the final act, we’re back to Kate and her tribulations. She manages to escape her gilded cage, with Larry’s guidance, and takes all Madsen’s incriminating files with her into the bargain. Then we watch as all three characters come together in an action-packed scene in Larry’s father’s house. Without giving too much away, it’s safe to say that the storyline is finally wrapped up with a great big bow. The finale very firmly closes one chapter in Larry’s life, and quite possibly opens another.

Some plots points still grate somewhat. For example, Larry sends Kate to his father’s house, just so the baddies don’t have to spend too much time trying to track her down. However, on the whole this book manages to strike a good balance between its verbose sections and the more bloody bits. The series doesn’t appear to have caught on in English, as a further thirteen volumes have appeared in France to 2019, with no new translations from Cinebook in several years.