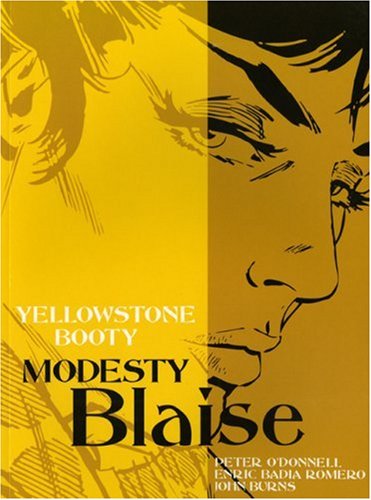 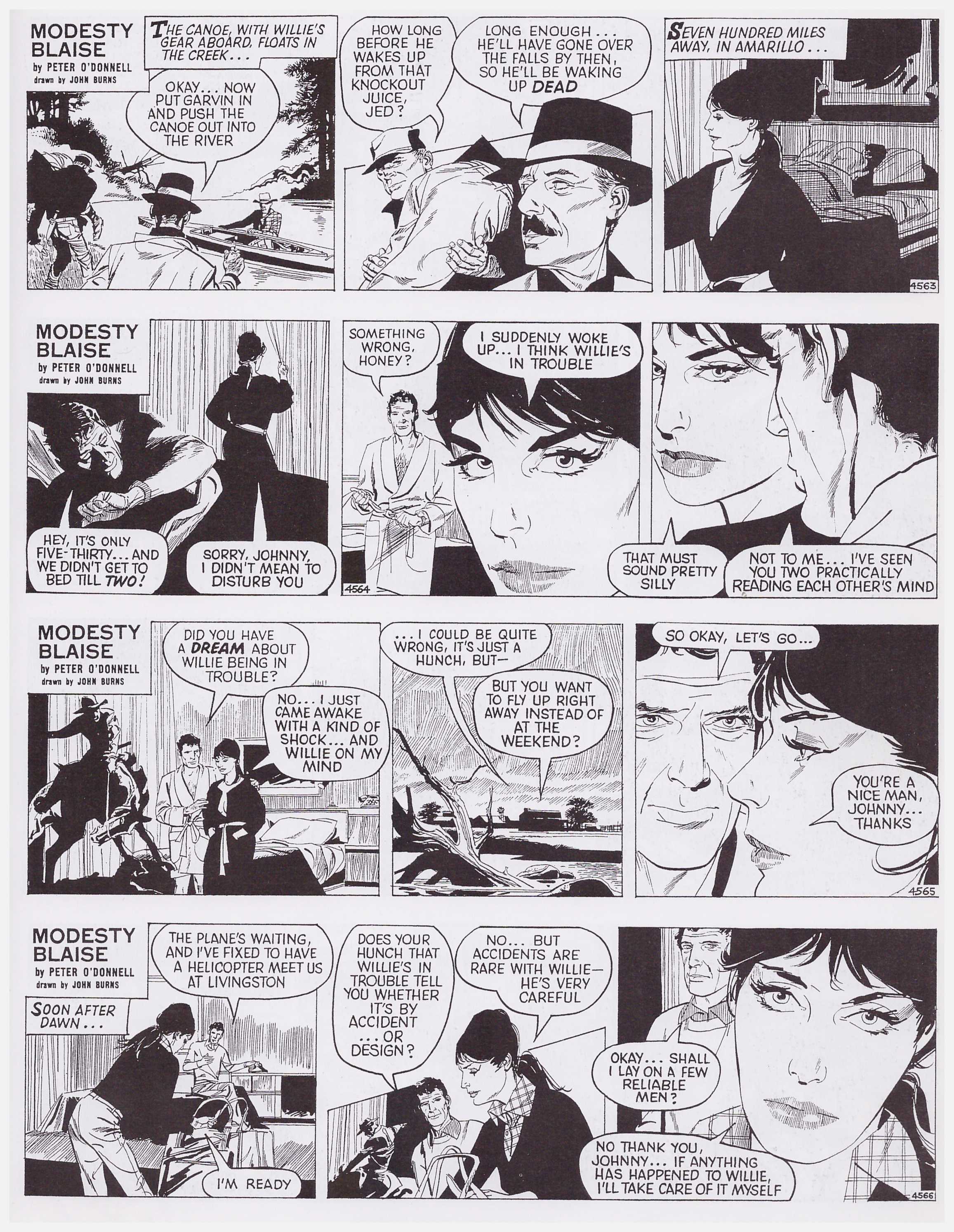 This collection presents the final work from Enric Badia Romero’s first stint illustrating Modesty Blaise. In 1978 he was offered the chance to create his own daily newspaper stip Axa, set in a post-apocalyptic future, and when Axa was abruptly cancelled in 1986 he returned to draw Modesty for a further fifteen years.

The replacement artist was the accomplished John M. Burns (featured art), already a veteran illustrator with a well developed graphic style, who takes over for the title strip set in Yellowstone National Park. Over the first few weeks he illustrates Modesty in Romero’s style, gradually phasing in his own version, but there are differences in Willie Garvin from the start, and Burns is more inclined to have the viewpoint closer in to the cast. Any artistic preference would just be a matter of which style holds the greater appeal, as both artists are excellent.

By Burns’ run times had changed, and all the qualms about the strip featuring nudity had evaporated. While this was gratuitous racy material, O’Donnell at least works a level of necessity into his story. It’s a leisurely one with Modesty believing Willie to be dead, and a group of crooks in search of some buried treasure also the object for others with more virtuous intentions. There’s a good scene when some information is required from a reluctant donor, but while tense in places, the length outlasts the plot.

Entirely different in tone with its pompous and superstitious gang leader and henpecked husband is ‘Idaho George’, the title taken from a conman known to Modesty now masquerading under a new identity. O’Donnell enjoys conceiving ever more ridiculous names for henchmen (and a butler named Strangler) and Romero creates a fantastic cast of characters in what’s a great romp. As ever, the joy is in figuring out how traps will fail and how revenge will be meted out, but the eccentric supporting cast are the icing on the cake.

As he notes in the introduction to ‘The Golden Frog’, O’Donnell had made several references to Modesty and Willie taking combat training in Cambodia under a master named Saragam, who now actually appears for the first time. Then contemporary politics make a rare intrusion into the strip as O’Donnell uses the background of Saragam’s homeland being taken over by the Khmer Rouge, who were executing anyone they considered ideologically unsound. While the three panel format can restrict an ongoing story, it also often necessitates Modesty being absent from her own strip for several days at a time. As seen in Burns’ tale, it’s usually Willie who picks up the slack, but O’Donnell makes an interesting narrative decision with strip, as other than a couple of brief flashback sequences, he runs a full month of continuity before featuring Modesty to any great degree.

Any writer of adventure thrillers should be in awe of O’Donnell’s mastery here with the best tale in the book, tense and compelling with surprises and all elements falling into place. In what at the time he considered his swansong, Romero produces his customary elegance.

Story continuity rarely features in Modesty Blaise, but Green Cobra features Burns’ remaining work on the strip, plus the contributions of Patrick Wright.