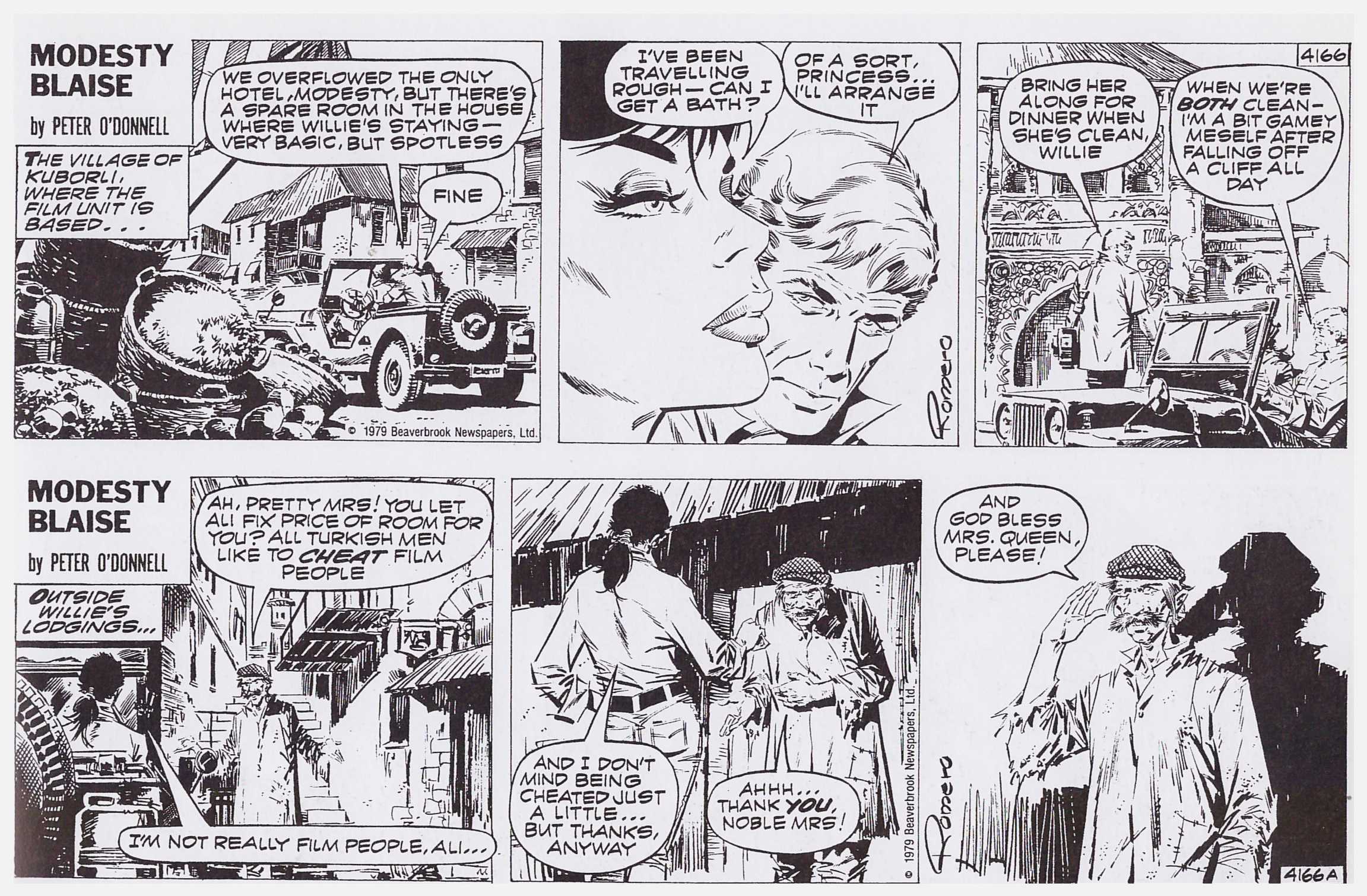 Death Trap brings a change to the Modesty Blaise continuity. In 1976 the Evening Standard, who commissioned the strip, ceased its Saturday edition, but the strip was widely syndicated to places that did publish on Saturday. This meant that in addition to the other disciplines of moving a story along via three panel segments, Peter O’Donnell needed to have every sixth strip serve a holding pattern. He achieves this so adroitly that had it not been pointed out via the strip index at the back of every edition, many might be none the wiser.

There’s more than enough enlightened content ahead of its time within Modesty Blaise to permit overlooking the patronising story title ‘The Vanishing Dolly Birds’, dating from 1976. That isn’t the only oddity about a story that’s slightly less successful than usual. There’s an extremely camp and not very convincing villain, a danger at the circus that comes across as forced, and Modesty at odds with Sir Gerald Tarrant at MI5. There’s also an uncharacteristically downbeat ending.

That’s just a temporary lapse, though, as O’Donnell is back on form for ‘The Junk Men’. Willie Garvin is helping a friend by acting as a stuntman on a movie being filmed in Turkey, and Modesty joins him. Neither are aware, though, that three of the world’s biggest heroin dealers also have a purpose for being in Turkey. The film is being sabotaged to run behind schedule, and the extras are a surly, uncommunicative bunch…

The title story has an interesting twist, several, in fact, and you’re better off not reading O’Donnell’s introduction until afterwards. ‘Death Trap’ is about spies and politics, but at its core, revenge. Sir Gerald Tarrant of the British intelligence services has scored rather a coup by arresting three spies from an Eastern European nation. They want revenge, and consider the best way of achieving it is to discredit Tarrant by holding Modesty to be exchanged for the release of the three captured agents. There’s an element of revenge in the lure, and O’Donnell surprises throughout with the way he ensures his story squirms away from reader expectation.

Whether he’s drawing a circus troupe or remote Turkish cave dwellings, Enric Badia Romero delivers a masterclass. His brief is to present a real, if often exotic and glamorous world, and there’s never a moment that he doesn’t convince. Best of all are his character designs. While bequeathed some by original artist Jim Holdaway, those he creates himself are memorable and consistent from any angle. Just look at the average American graphic novel featuring realistic art and see how often it is that the looks of main characters vary according to viewpoint.

Despite the opening story being slightly below par, any Modesty Blaise fan would be really missing out by not reading the other two.