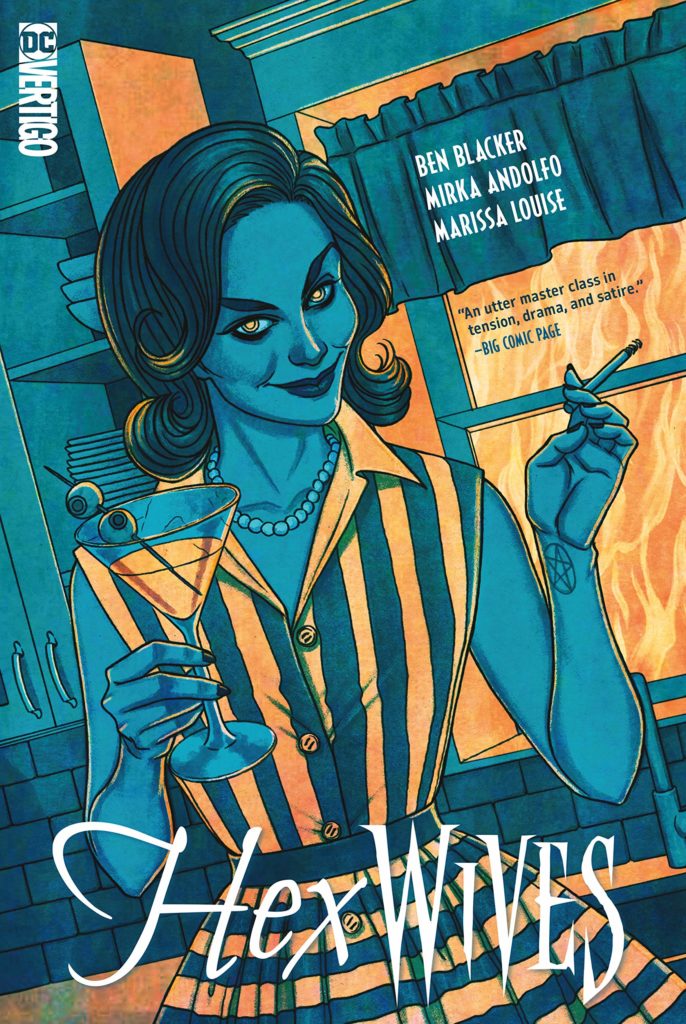 Ben Blacker borrows from the fictional Van Helsing dynasty of vampire hunters to create the Gabriel family of witch hunters, who’ve seen it as their purpose over the centuries to ensure the witch population never exceeds a few dozen, otherwise they might take over the world. It’s a tricky task. Each witch has a form of super power accessed by spilling blood, and the witches can be killed in the conventional sense, but they’ll be reborn in the body of another woman, immortal presences surviving the centuries with the knowledge of their previous lives. Once that’s established, Blacker moves to a white picket fence community where the 1950s never ended, a community of women baking cakes and cleaning while they await the return of their husbands from the office.

We know something’s wrong, but aren’t sure what, and it’s where Blacker can’t free himself from the narrative trap he’s inadvertently set. The opening chapter zips nicely through assorted bloody atrocities, but once we reach the Stepford Wives section, the story of necessity needs to reflect the dull and ordinary lives the witches are experiencing, and dull and ordinary it remains for far too long. Brief interludes teasing with the deception being discovered don’t disguise that it takes three whole chapters before anything really starts moving again, and by then it’s too late as interest has evaporated.

Blacker’s story may never move out of first gear, but Mirka Andolfo’s art sparkles. The sample page is one of a progression through the book of Isadora looking in the mirror for nine panels, each slightly different according to the stage of awareness, and she’s similarly attentive when it comes to creating the remainder of the witches.

Little references throughout acknowledge the influence of 1960s TV show Bewitched, which worked with many of the same ideas, but far more imaginatively despite the depressing tenor of the times. We know what’s happened to the witches early, and it’s inevitable the truth will be revealed and revenge extracted, so something really imaginative could save the day and make Hex Wives as interesting as the title sounds. It doesn’t.