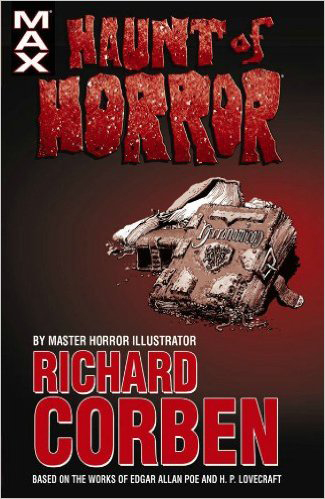 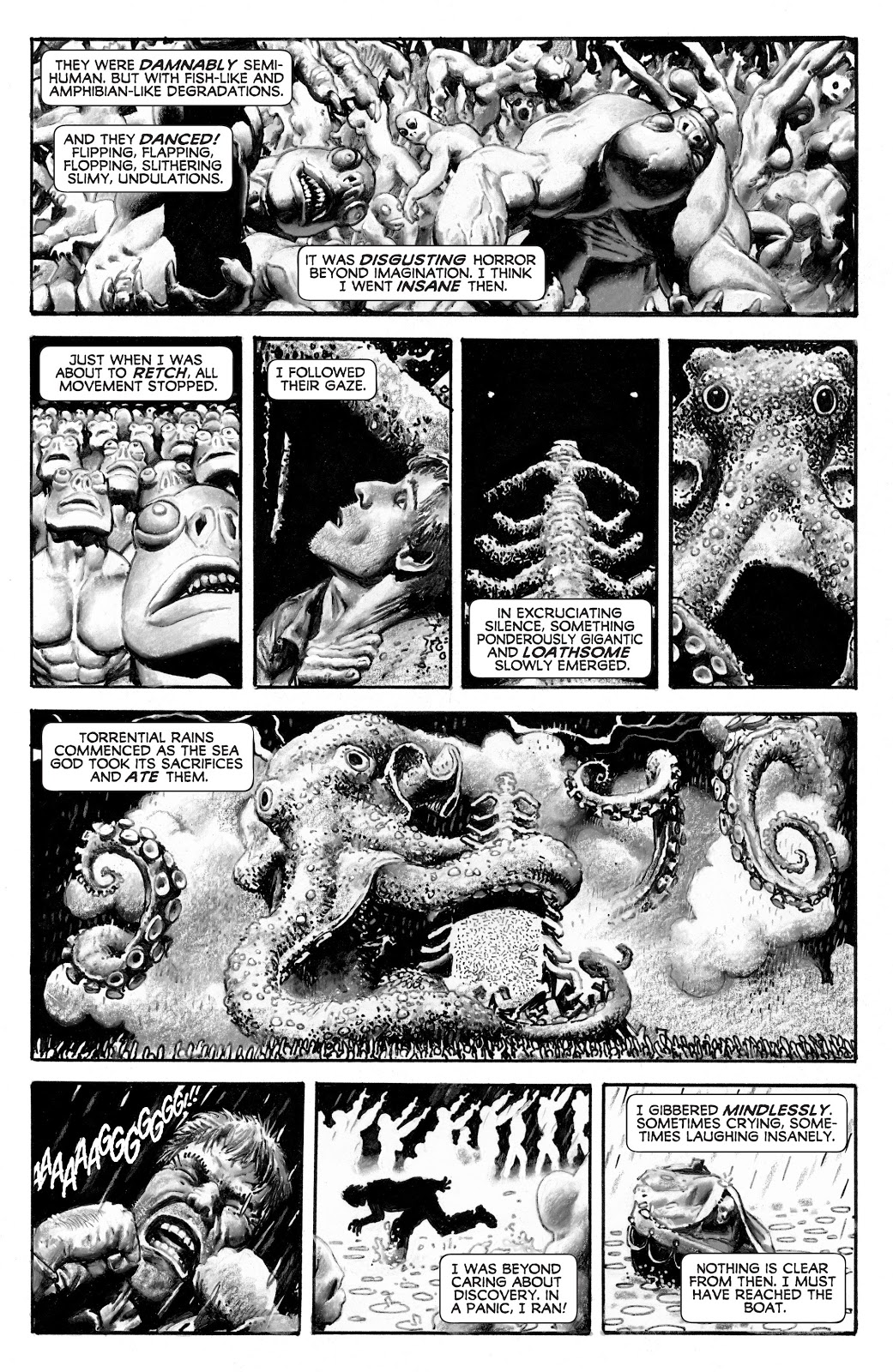 This is a book of two halves, the first featuring stories adapted from Edgar Allen Poe’s work, the second featuring stories based on H. P. Lovecraft’s mythos. Richard Corben has been adapting Poe for many years. In fact, he had already self-published one collection of his tales from the 1970s and 1980s, (Edgar Allan Poe), and would follow this with another, for Dark Horse, in 2014: Spirits of the Dead.

Rich Margopoulos and Rick Dahl (Corben clearly electing to only work with others who have the same forename, or near enough) handle the writing for the Poe tales. Some are straightforward adaptations, while others are from the ‘inspired by’ school. This is especially true of stories based on poems, many of which are mere mood pieces.

‘The Raven’ opens the book, and it’s one of Poe’s best. Corben had already produced a version of this story, but this is a fresh take, and it’s a very strong opening, with beautifully rendered airbrush-style art and a story that seamlessly adds more plot to the original poem.

Other stories are updated, so we have contemporary tales of someone going postal at a school reunion (‘The Happiest Day’), a dentist drugging, molesting and accidentally killing his cousin (‘Berenice’) and a gangland shootout in a nightclub (‘Izrafel’), sitting alongside tales set in a post-apocalyptic wasteland (‘The Conqueror Worm’).

‘The Tell-Tale Heart’ features a maniac whose senses are “preternaturally heightened. Especially my hearing”, which can’t help but remind most comic readers of a certain horned superhero. This is yet another story that adds to the original, in this case a clever little twist at the end. It’s brave to try to improve on a story as well known as this, but most of the gambles pay off.

For the Lovecraft half we’re dealing with overwrought horrors of a different flavour. Whereas Poe was concerned with obsession and mania, Lovecraft had very different goals in his writing, largely ignoring characterisation in favour of tales that tried above all else to create a sense of otherworldly terror.

One of the best stories is ‘The Lamp’, a tale of Egyptologists awakening a monster that would give the Mummy nightmares. Invisible for much of the story, the creature is scary enough when it’s tossing people about and eviscerating them and you can’t see it, but when it’s revealed in all its glory in one memorable panel it’s truly terrifying.

‘Arthur Jermyn’ features some great artwork, though it’s heavy on exposition, with unlikely plot developments. So, just like Lovecraft. However, in spite of his many weaknesses, Lovecraft definitely had something, and his tales of batrachian beasties are ideally suited to Corben’s often disturbing style.

Not all the artwork is polished, and we have much rougher pen and ink style art alongside full airbrush. Thankfully, most of the lettering is handled by someone else, as Corben’s is usually poor (it’s easy to spot the sound effects he’s responsible for here). The book also includes full text versions of the stories and poems that have been adapted, as well as additional material such as alternative cover roughs and promotional pieces.

Corben’s style is unlike anyone else, and it’s refreshingly difficult to guess at his influences. He’s the best artist imaginable to adapt the works of Poe and Lovecraft, and both are served well here with stories that add something to the originals, and hopefully help to introduce new readers to the work of two of America’s premier horror writers.