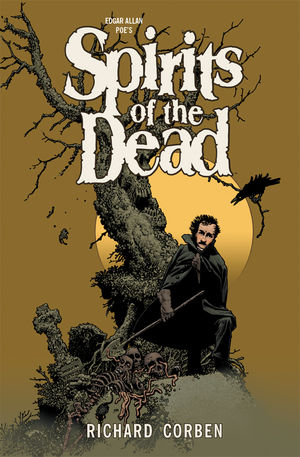 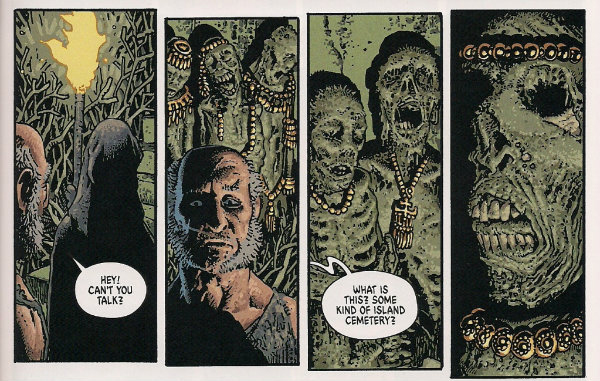 Richard Corben has had a long and fruitful relationship with Edgar Allan Poe, whose tales of obsession and mania, which while often the very definition of purple, display an undeniable and prodigious talent and imagination. The artist had approached Jan Strnad about the possibility of adapting some Poe tales, and the writer had suggested that they work together on Ragemoor instead. However, although that book was strongly influenced by Poe (and H. P. Lovecraft) it didn’t scratch Corben’s itch, so he decided to adapt some Poe himself, and Spirits of the Dead is the result.

The stories appearing in this book are presented in Poe’s original publication order, and they begin with a plain text version of ‘Spirits of the Dead’, the poem which lends its name to this collection, and which first appeared in 1827. ‘The Cask of Amontillado’, which appeared in 1846, closes this selection of five poems and nine short stories.

Many are excellent, with some of the more noteworthy being ‘The Murders in the Rue Morgue’, featuring a terrifying and yet sympathetic monster, and the book’s longest story, ‘The Fall of the House of Usher’, one of the tales where Corben shows some of what Poe only hinted at (incest is a theme that rears its head at least a couple of times in these stories). ‘The City in the Sea’ is an affecting tale that Corben has extrapolated from a poem, transforming it into a powerful tale of slavery and revenge.

Corben had already tackled some of these stories before (including ‘Berenice’ and ‘The Conqueror Worm’) but here attempts something fresh. Even though he has produced at least two other versions of ‘The Raven’ he still succeeds in differing this reworking.

Corben often works with a writer, but here manages to pull off the task of writing and illustrating these stories admirably on his own. Mag the Hag, our narrator in the tradition of Creepy or Eerie, opens and closes many of the tales with pithy observations and witticisms, and the groan-inducing puns that she uses can be forgiven as that’s the style Corben’s aiming for.

This book includes a cover gallery, with six of Corben’s painted covers, some of which are truly excellent. The artwork ranges from very polished, full-on airbrush effect to much looser pen and ink style. But, whichever approach he chooses, Corben is always a consummate professional, and his decades of experience are plain to see. Corben has long been considered the undisputed master of this type of story, and with good reason.