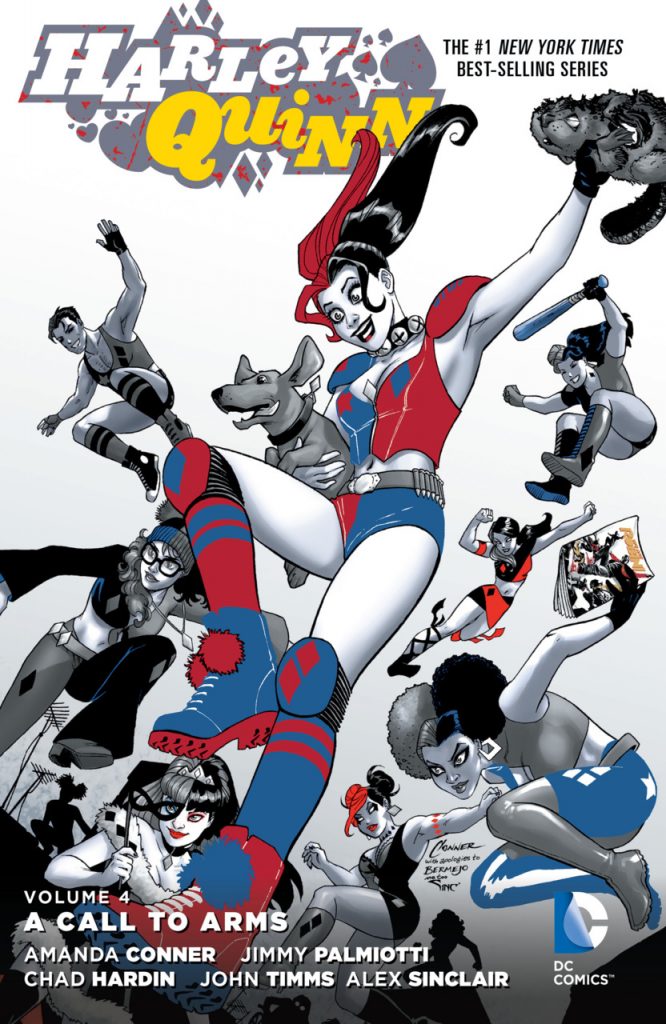 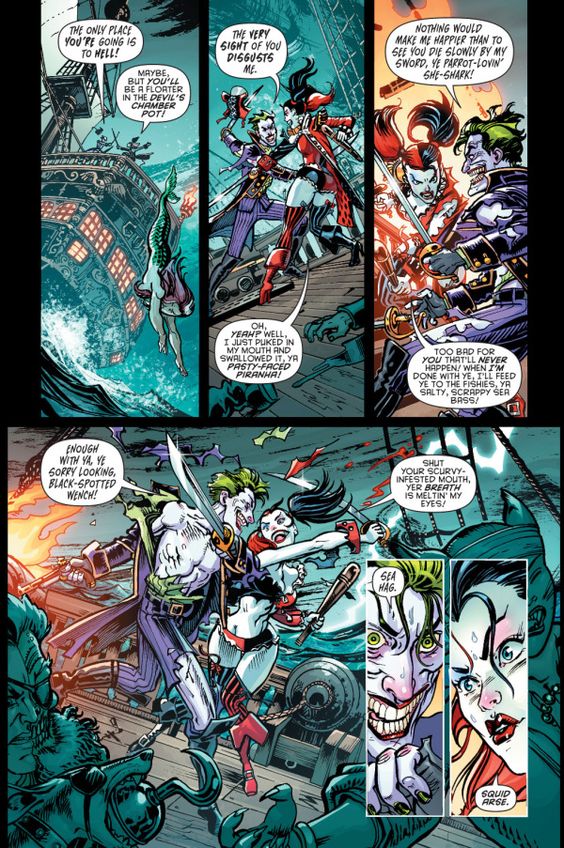 Harley Quinn and her newfound superhero team, the Gang of Harleys, take on their first major mission when tasked by a sailor’s wife to find her missing husband. As is always the case with Harley Quinn, nothing is as simple as it seems, and the adventure sees the Gang, recruited in Kiss Kiss Bang Stab, take on a now alien-seaweed addicted, out of control Captain Strong. This sea-faring adventure involving an unknown hallucinogenic leads to more Harley fever-styled dreams as the protagonist envisions herself as a ship’s Captain, tasked with the mission of defeating the enemy pirate Joker in a bid to save her mermaid lover (Poison Ivy). Dream sequences in previous books have used guest artists, but this section is drawn by regular artist Chad Hardin, and is a credit to his skill at varying his usual style. It also allows him to play about with the designs of other popular characters, a noteworthy figure being the ‘Davy Jones’, squid-bearded Batman acting as the Joker’s right-hand man.

The action-packed missing person mission concludes with a very expensive hospital bill, so Harley sets off on her own to LA to try and earn some more money for her new team. She hits up Hollywood to find a kidnapped daughter who is supposedly being held for ransom, forcing her distraught mother to continuously cash out to ensure her safety. The brass and colourful Harley seems just as at home in the over-exaggerated, glitz and glamour of Tinseltown as she does in the carnivalesque Coney Island. On her travels, she teams up with a cowboy and catches up with an old flame, who is left out of pocket when Harley takes his kill mission. With an angry mercenary on her tail, and an ever-growing number of enemies hunting her, the heat is on as Harley tries to get to the bottom of the California kidnap.

A Call to Arms also features Harley Quinn’s road trip, reuniting her with her Gotham City Sirens team as she, Ivy and Catwoman set off to deliver Harley’s Uncle Louis’ ashes to Long Island. Despite the sombre task, it doesn’t take long for the girls to spice up the journey, with pool parties, theft, murder, truth and dare, to beating someone up with cactus gloves, and getting drunk on Reservation liquor resulting in hallucinations for not just Harley but Ivy and Selina too. There’s also a guest appearance from an unlikely duo. A ton of guest stars and artists contribute to the usual insanity, but this story in particular really hits the heart of who Harley Quinn is. She may be a deranged, occasional killer clown, but she is full of love, and truly comes to life surrounded by her family and friends. Throughout the trip we get glimpses of Harley’s childhood, warm memories of her Uncle and Aunt, the touching notion that life is lived after death, and lost loved ones are immortalised in treasured thoughts. It’s a memorable and emotional journey, a perfect blend of lunacy and love, an of out-of-this world experiences grounded by the very realistic, human emotions of DC’s favourite Clown Princess of Crime.