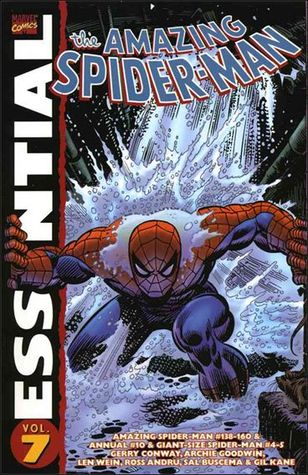 This is the comic equivalent of a football match, being so definitively a book of two halves.

In the first Gerry Conway continues his generally fine run of stories, and in the second the quality dips under Len Wein. Ross Andru illustrates most of the material, providing some consistency.

The earliest stories have Spider-Man still emotionally raw from the death of his girlfriend, and unaware that someone’s messing with his head in deadly fashion. This is the Jackal, an enemy Spider-Man doesn’t know he has, yet whose aware of his civilian identity of Peter Parker. Over a dozen chapters Conway constantly builds tension and confusion, highlighting the effect by dropping in on the Jackal’s machinations. He establishes genetic genius accompanied by total insanity, all the while stringing the readers along regarding who the Jackal might be. What he builds here led to the wretchedness of Spider-Man’s worst ever period in the 1990s, but the original material remains taut and compelling. There are a few inconsistencies, but they don’t ruin the story.

Apart from the Jackal Conway’s new foes for Spider-Man aren’t a memorable bunch. Cyclone, the Mindworm, the Grizzly and others have rarely been seen since, and when they do appear it’s generally as joke material. Moses Magnum was marginally more successful, but only when given a power boost.

Conway’s new villains and scenarios might not always have worked, but he attempted to deliver original stories, whereas Wein all too often opted for rehashing previous material. Conway’s new villains may not have been top rank, but those introduced by Wein have been all-but forgotten. It’s rather a shame, as a tense story set in a football stadium displays what Wein could do when setting his mind to matters. He has a greater facility with Peter Parker’s supporting cast, but it fails to compensate for his lacklustre Spider-Man material.

Those preferring to have the stories in colour are directed to the Marvel Masterworks editions of Amazing Spider-Man. The opening material here closes volume 14, the bulk appears in volume 15, and the closing stories are in volume 16. The Masterworks volumes are lacking the Spider-Man team-up issues reprinted here, but the Punisher team-up also appears in Essential Punisher volume one.