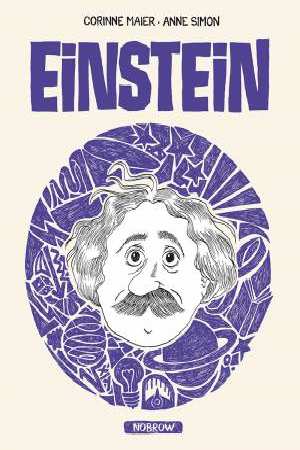 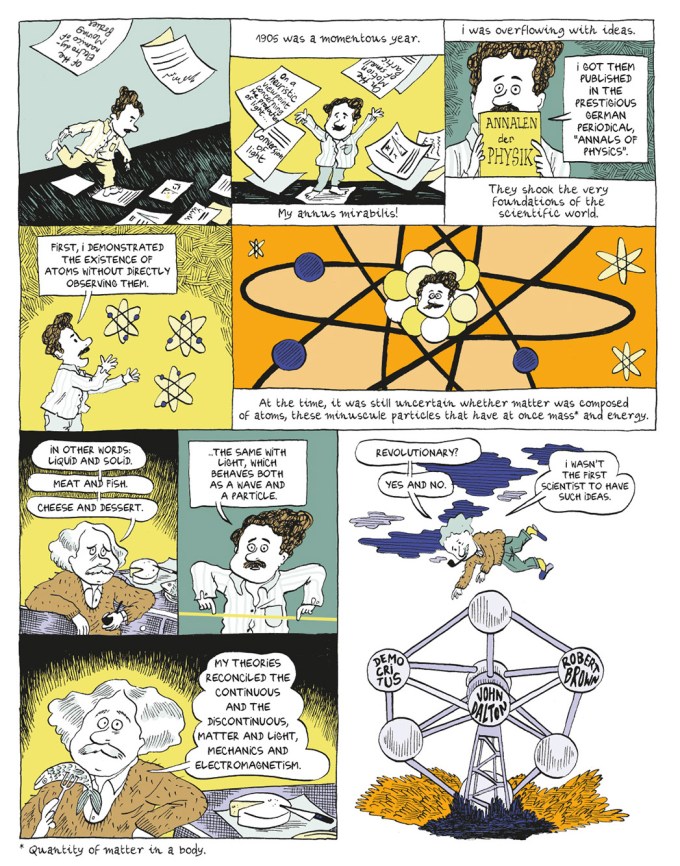 Following their acclaimed comics biographies of Freud, and Marx, French duo Corinne Maier and Anne Simon turn their attention to a third Jewish thinker who has mapped and shaped our world. Writer Maier is a trained psychoanalyst, who also studied economics. She’s well-placed then to tackle psychologist Freud, and economist/social scientist Marx, but how does she fare with physicist Einstein?

Well, they spend longer on the formative years than with Freud – which had the subject open a neurology clinic by the fourth page, before jumping into case studies and summaries of this methods. Still, there is credibly more to tell about Einstein, and after a splash page of him orbiting Earth, we’re introduced to the enduring and often contradictory perceptions of the man: Communist and Zionist; neglectful father, and ‘skirt chaser; peace campaigner and ‘father of the atomic bomb’. There’s plenty, then, beyond the physics to make a story, and from there they quickly rewind to his childhood. It’s widely reported that at school he was a poor pupil, and Maier and Simon bring this to life: his impatience with rote learning, intolerance of regimentation, and general outspokenness setting the pattern for his life.

It takes until almost the halfway point for Maier and Simon to really unpack Einstein’s ideas, with a short interlude on the Special Theory of Relativity. This groundbreaking theory on the relationship between, matter, light and energy resulting in the famous formula E=MC2 is succinctly explained. It’s illustrated with a combination of Einstein as presenting showman, and visualisations of his ideas.

Simon, is an excellent illustrator with an expressive cartoon style that packs in all necessary information, down to recognisable likenesses of other well-known personalities. On Marx, and particularly Freud, she impressed with her elegant and witty symbolic representations of the subjects’ ideas. She’s strong here, yet there’s a sense that, perhaps due to writer Maier having less depth of understanding of the material, she doesn’t illuminate the ideas quite so brilliantly.

For example, Einstein’s concept of time depicted as distorted clocks seems (after Dali) slightly obvious, yet it still allows a neat comparison to the rigid ‘“old” universe’ of Isaac Newton. Other pages, like the multiple blindfolded Einsteins walking a path that folds and twists back on itself (almost like a Möbius strip) add visual appeal, and capture something of his creative processes, if perhaps not the physics itself. The depiction of matter as a cartoon weight, and energy as an anthropomorphic sun, leads into a depictions of their dynamic relationship that’s a fine example of the communicative power of comics – a written description of the process would be long-winded and dull.

As with any biography, it’s better for showing the flaws of the subject, and there’s a fascinating insight into his relationship with his first wife Mileva. A pioneering woman student of science, we see her handling the calculations for Albert at the expense of her own student work, and subsequently on top of looking after their home and children. Finally, Albert’s love wanes and he leave her for his adoring cousin. Maier and Simon don’t moralise, they just present and let the reader form their own response.

Einstein suffers slightly from comparison with the duo’s brilliant Freud, yet it nonetheless paints a vivid picture of the man, and charmingly illuminates some of his key ideas. It’s hard to imagine there’s a book that could present a better introduction in the time this takes to read.

Einstein, is also available in an omnibus paperback Marx, Freud, Einstein: Heroes of the Mind.