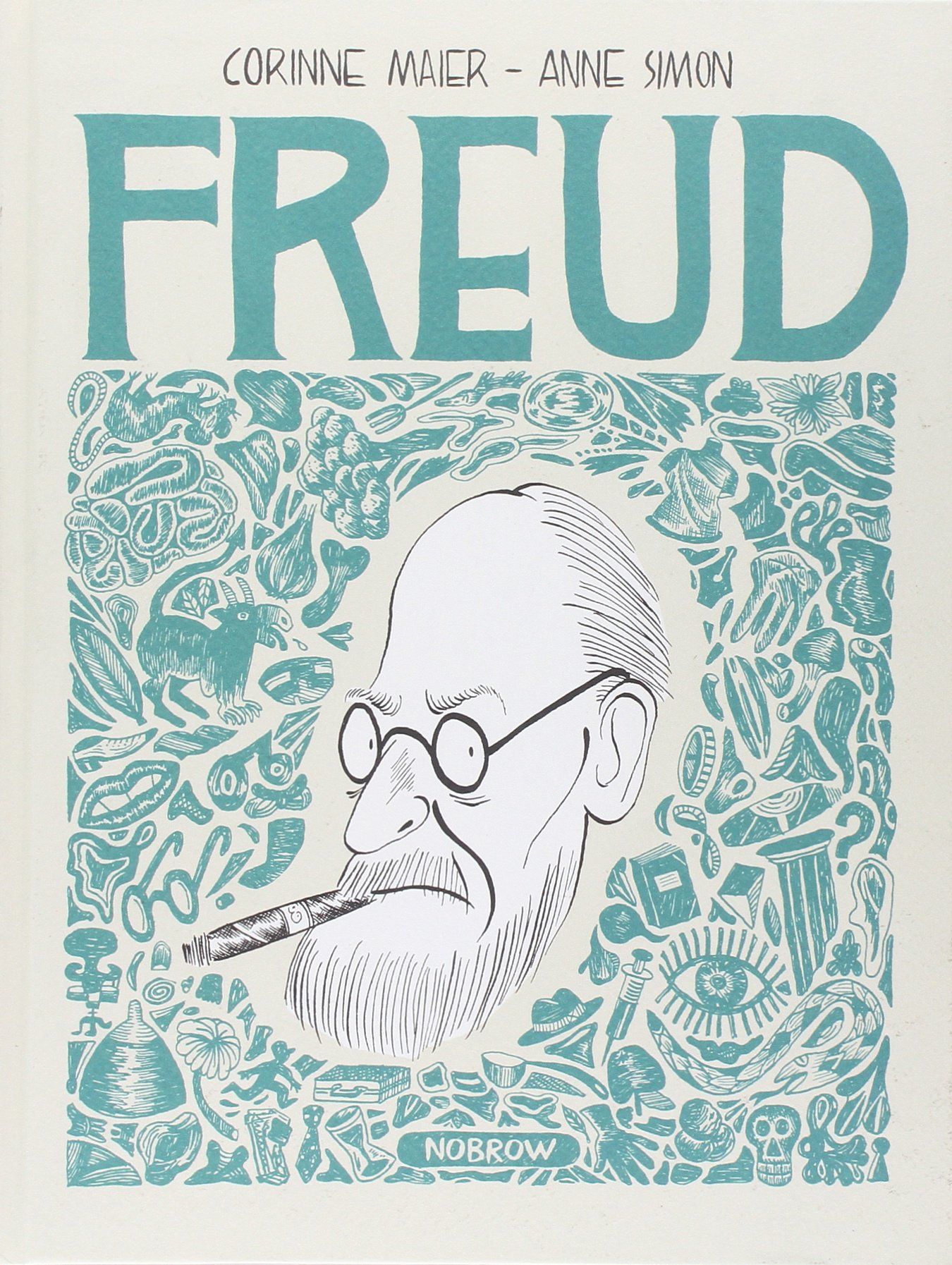 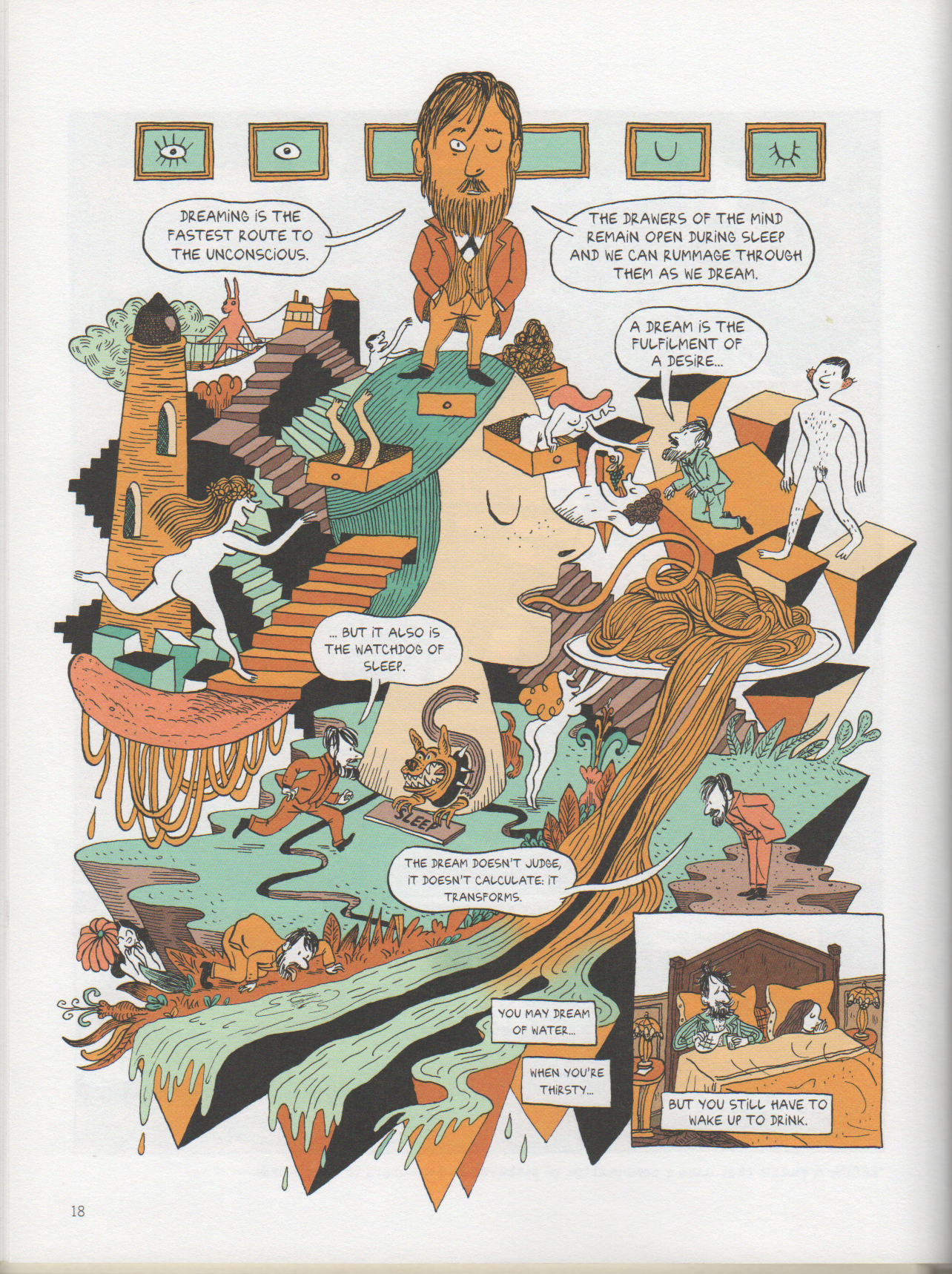 Freud by Frenchwomen Corinne Maier and Anne Simon styles itself a graphic biography, but it’s equally an introduction to some of the psychiatric pioneer’s key ideas.

Maier is a psychoanalyst, the author of a number of prose books, and an interesting and provocative thinker. Her book critiquing corporate culture led to her being summoned to a disciplinary hearing by her employer, which in turn made the front page of French newspaper Le Monde, doing no harm to the sales of her book!

There’s a lot packed into these fifty-odd pages. Key events of Freud’s life are dealt with lightly, and woven in with his developing ideas. Most pages seem self-contained – vignettes that could have easily been serialised and syndicated, so it feels almost a disservice to read it in a sitting. An example is the single page involving his most famous disciple – Carl Jung. In panel three Freud announces: “My dear Jung, you shall be my heir.” By panel six it’s “You’re in Oedipal rivalry with me!” A mere three panels later Freud’s terminated the relationship, and thrown him out of his house!

One of Freud’s most lasting ideas is that we are driven by unconscious desires, that are often suppressed, leading to mental and physical symptoms. This is succinctly captured in a case study of the woman ‘refusing’ to walk. Freud uncovers her attraction to her sister’s husband. Following the sister’s premature death, she goes for a walk (read ‘date’) with him. Freud thus concludes that she wished for her sister’s death and is now punishing herself for it.

Futher case studies are included: the early unpacking of the complex desires and fears of Anna O; Dora and the significance of her cough; Little Hans, whose fear of horses reflects his relationships with his parents; and so on.

We also learn about Freud’s methods to explore the unconscious: letting the patient talk freely; listening carefully; interpretation of dreams; and what we now call the ‘Freudian slip’- the unwitting expression of hidden feelings in ‘slips of the tongue’ or jokes.

The art is deceptively simple. Simon draws with dip pens, in a loose expressive style. It’s reminiscent of Jules Feiffer, or – to use a French example – Claire Bretécher. The colour too is simple, but effective, using a limited palette of greens and autumn colours. It aims more to give definition and coherence than be realistic. The rendering is restrained – she trusts the colouring to do it’s job – a lesson many have yet to learn! She adds to this, simple but effective depictions of the various settings, and best of all, an ability to symbolically depict ideas. In particular, she draws on the contemporary (to Freud) imagery of surrealism, best seen in the page (pictured) about dreams.

Simon is also strong on expressive gestures and body language. The single image of the woman out with her sister’s widower, perhaps as imagined by Freud, elegantly conveys the unconscious and repressed desire. They’re seated apart on a bench, she leaning exaggeratedly towards him, her foot pointing between his legs, while he has his hands crossed over his lap.

This is a bold project, brilliantly realised – and even more impressive for it’s brevity. It’s packed with ideas, but also wit and humour. It ends with Freud telling us that his name means ‘joy’, and this is very much a joy to read.

Maier and Simon have collaborated on a similar biography of Karl Marx, also available in English from NoBrow.