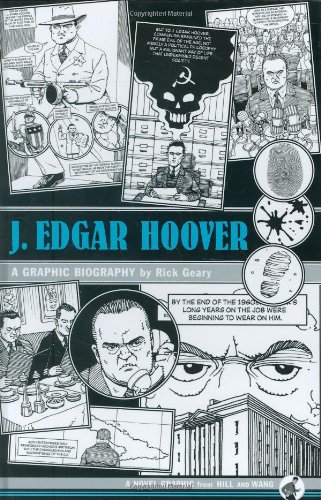 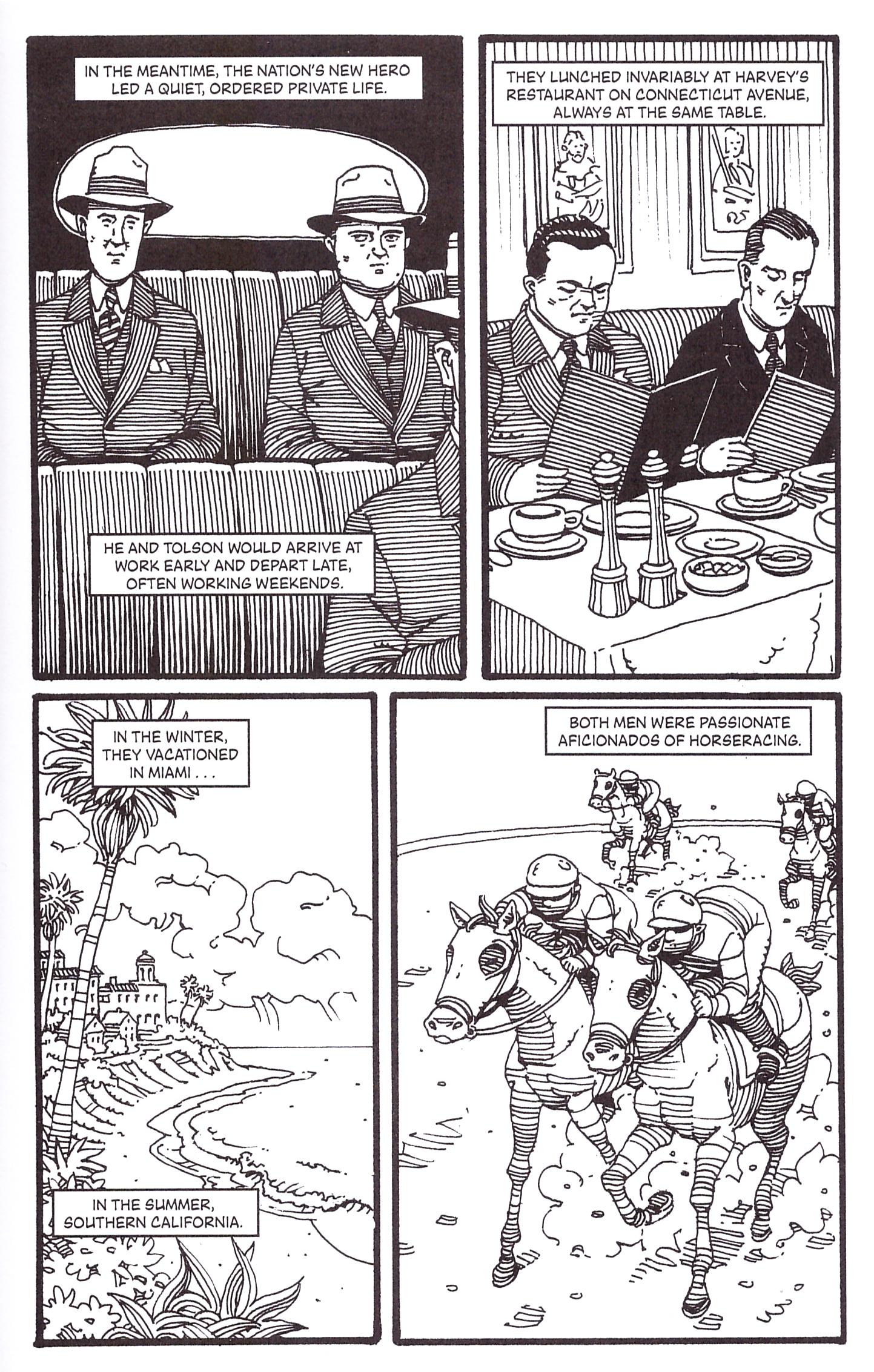 In a hundered small pages Rick Geary relates the life and work of this controversial man, whose career at the FBI lasted from prohibition in the 1920s to the Nixon administration in the 1970s. This is a straight biography, not a satire, but it’s leavened by plenty of gently humorous moments.

Hoover is a fascinating biographical subject. He was instrumental in the development of more systematic methods of crime detection, compiling from Police Departments a master file of fingerprints, and of course the expansion of the FBI.

Geary shows us Hoover’s strengths: a man ambitious to make a difference, and with the vision, drive and expertise to realise it. He was quick to see the importance of positive media coverage, and was politically savvy enough to build working relationships with most of the eight different presidents he served under. We see how Hoover deals ruthlessly with enemies, rivals, and even confidants or loyal agents fallen out of favour. Geary explores his close relationship with his deputies, yet he’s always weighing up and giving a balanced account of the evidence. He resists jumping to conclusions just because they might enhance the story.

Hoover’s quirks are a gift to Geary, and he is almost forensic in detailing his decline and fall. He portrays Hoover becoming a dictator, embracing extremes of control: “those who were overweight, had bad skin, thinning hair or protruding ears, were deemed unsuitable to the Bureau’s image“.

Hoover’s antipathy to the Communist Party became an obsession, and Geary shows the tactics used against them. These included the ‘snitch jacket’ – they would undermine communists to their colleagues by planting ‘evidence’ that they were in fact an FBI informant. Towards the end of the book Geary presents, in quite deadpan style, some killer facts about party members who were in fact FBI informers, and the amount of resources used against Communism compared to organised crime!

On first glance Geary’s work is slightly cartoonish, charming, almost to the point of cuteness. However this belies his diagrammatic precision, and forensic attention to detail. He’s also able to deal with highly charged material without coercing the reader. One of Hoover’s early hobby horses was that immigrants might be Communist spies or moles. We hear how Hoover rounded up 6,000 immigrants in an operation spanning dozens of cities, and in Boston those affected were “chained together and paraded through the streets“. Some artists might tackle this with a two page spread showing contorted bodies, and howling dejected faces. Geary just show us two people from the waist down, ankles manacled. The scene ostensibly stripped of emotion, yet he captures a shambling weary gait – bodies literally chained into a collective rhythm. It’s more powerful for his restraint.

Geary’s a skilled writer of non fiction and biography. He effortlessly squeezes in a huge amount of factual detail, in an analytical yet balanced way that leaves us to make up our own minds. This is a powerfully realised biography of an important and fascinating man.