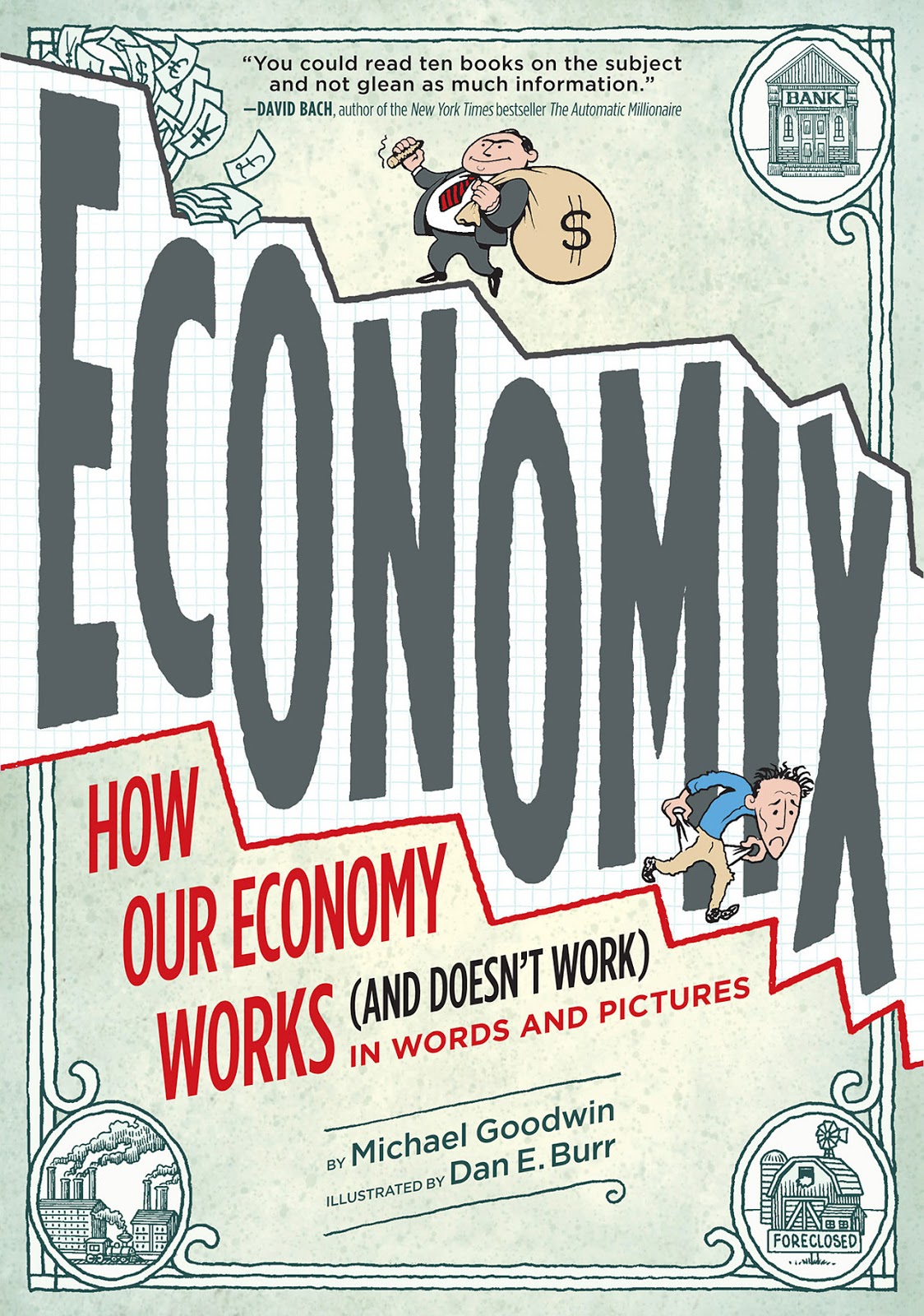 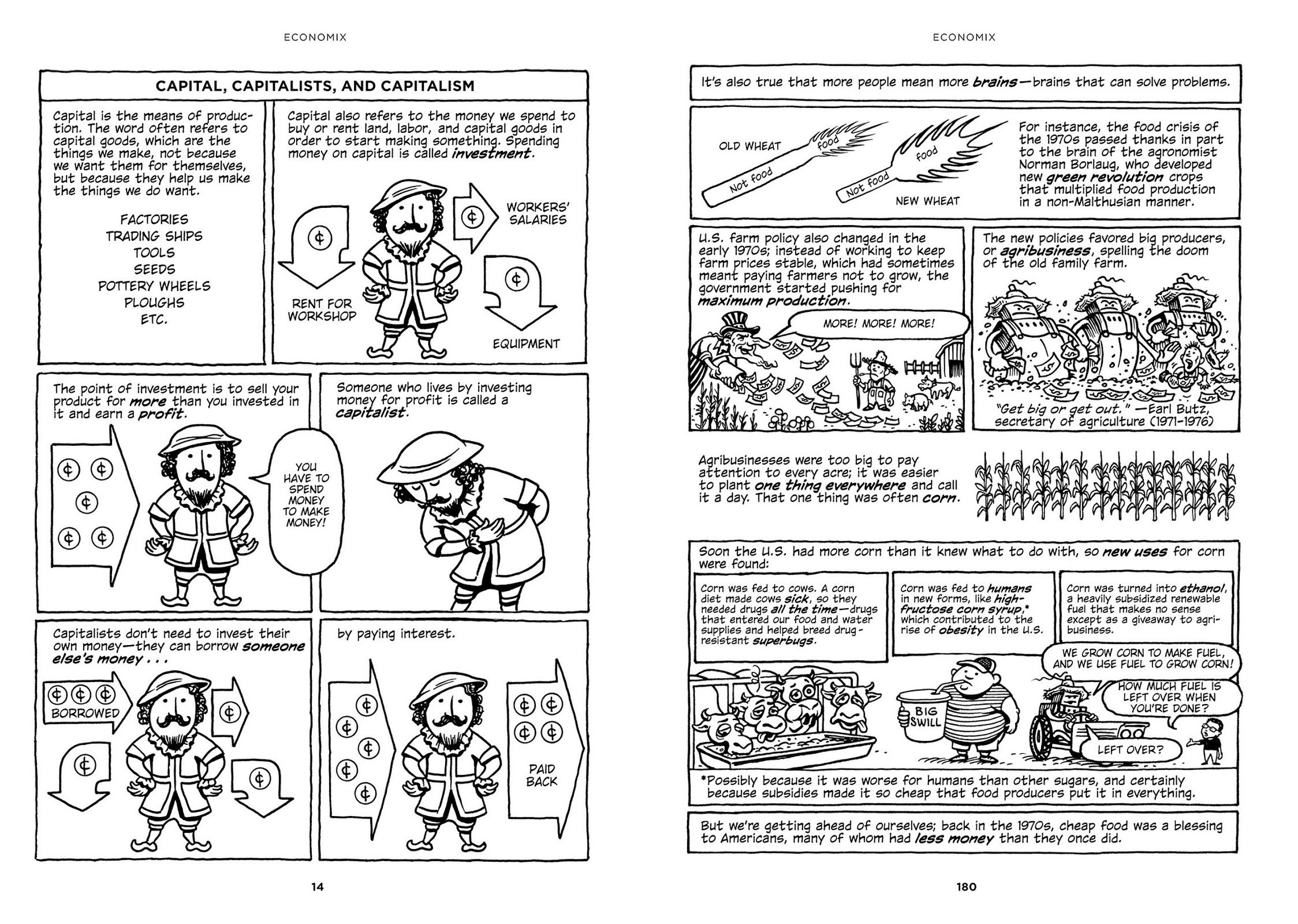 In Economix Michael Goodwin and Dan Burr provide a concise history of global economics to 2011, but crucially separate events from political interest and association. This is particularly important when covering the past fifty years, when the Western world has constantly been told that less regulation of financial institutions is for our benefit. How does that connect with exceptional numbers of poor and homeless? Goodwin examines other countries, but concentrates his text on the USA as an example of any economy where capitalism is the prevailing ideology.

Early on Goodwin scores heavily by taking a look what 18th century founding guru Adam Smith had to say about economics beyond advocating a free market, something most of those quoting his findings don’t do. They’re either unaware he believed regulation necessary for a level playing field, or choose to keep quiet about it when mentioning Smith’s principles. In an era when the gap between rich and poor is immense, Smith’s observation that high wages are desirable for all is sidelined.

Goodwin’s explanations are text heavy for the sake of accuracy and clarity, and Burr’s accompanying illustrations simplify complex ideas, very often with a good joke. He’s great at ensuring the villains mentioned have a suitably surly expression, and his recurring version of Uncle Sam in rolled up sleeves shovelling dollars right, left and centre is strangely sinister.

As with similar graphic novels explaining the way the world works (see recommendations), Goodwin and Burr supply a whole bunch of fascinating asides to have you scrabbling online for verification. Did the Dutch really eat their Prime Minister? As appalling as it is, was slavery really economically unsound also? Did US President Warren Harding really claim he was unfit for office? The statistics for the USA associated with each 1% rise in unemployment (page 207) are terrifying. Goodwin’s economic explanations broadly include much 20th century world history, and in passing the source of much of today’s ills. US Government subsidising of corn in the 1970s might have seemed like a good idea, but see the sample art for how that worked in practice.

The conclusion that Goodwin reaches is expressed early: that too much economic dogma is theoretical, and in some cases based on flawed models. Although vested interests will claim otherwise, what worked in one set of circumstances can’t necessarily be applied successfully to similar circumstances. He also notes that all successful economies have levels of state oversight, which isn’t what big business would have you believe, and that the rich and powerful are good at persuading people our interests coincide with theirs. Smith has a pithy comment about that on page 198.

As with so many other professions seemingly hidden behind a curtain of specialist knowledge, so much can be explained so easily, and Goodwin simplifies without dumbing down. For the USA he details how government policies since the 1970s have been designed to create private wealth, and how since the 1980s the policy has been to concentrate that wealth in fewer pockets. In the 1970s an average CEO earned more than forty averagely paid workers, by 2000 they earned more than five hundred averagely paid workers. During the same period that CEO was taxed less and the workers taxed more. Economix is a monumental achievement, but extremely uncomfortable reading, and offers little hope for the future. At least anyone who completes the book will understand how they’ve been screwed for years.

Goodwin and Burr update regularly at https://economixcomix.com/ and the website features a new epilogue for Economix taking us to 2018.