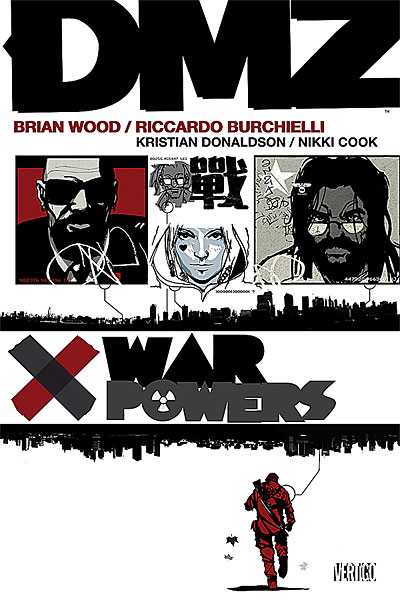 The events of Blood in the Game resulted in a change of focus for Matty Roth, who traded his neutrality to openly support the campaign to elect Parco Delgado as the DMZ’s first leader since the civil war began. Taking some time away he heads off to Staten Island, over-run with American government troops and discovers an enlightened manner of bringing the warring factions together. The story is by number one replacement artist of choice Kristian Donaldson, and his contributions are always a jarring surprise after the easy fluidity of regular artist Riccardo Burchielli. Donaldson’s figures are stiff and his layouts equally so. It’s a shame, as Brian Wood delivers a decent story about what could happen with a little more flexibility.

Burchielli is back for the title story as Roth returns to the DMZ to discover Delgado has solidified his power by ordering all military personnel off the island, and declaring all restoration contracts awarded to the Trustwell company invalid and cancelled. Furthermore their private security force is given eviction orders. Delgado also believes in what many consider a myth, that a Chinatown bank stockpiled gold before the war and weren’t able to move it when hostilities began. Believing it’s no myth, Delgado wants the gold, which involves pitting Roth against one of his closest allies. Wood delivers a suspenseful story that squirms around to an unpredictable conclusion.

Having ended the previous volume in a place well away from where he started, there’s a similar shift in War Powers, and the question to be asked is just who is Matty Roth? Zee certainly has her ideas on that, and doesn’t like what’s going on. She leaves her safe haven and heads North to remove herself completely, only to run into a batch of Trustwell mercenaries, one of whom is severely injured. Wood’s single chapter stories rarely match the resonance of his longer material, but the simple moral dilemma at the heart works. Hearts and Minds continues the tale.

War Powers and Blood in the Game can both be found in the hardback DMZ Deluxe Edition book three.