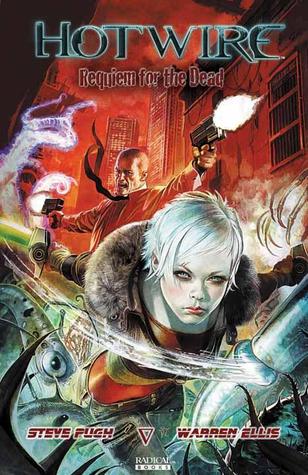 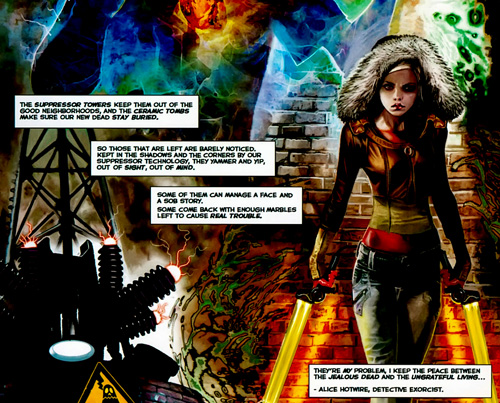 Warren Ellis’ futurist tendencies emerge to play again in Hotwire: Requiem for the Dead. Ellis birthed the fascinating concepts that shape this tale, though it is Steve Pugh who breathes life into it by fulfilling both script and art duties. The setting is the near future where science has subverted the supernatural and ghosts have become common, almost mundane presences. These phantoms are now classified as forms of electromagnetic energy and referred to as Blue Lights. The disembodied spectres wander the streets, the new homeless disenfranchised not from a home but from their own bodies. Problems arise when these energy-based entities become powerful enough to squat in a living body and danger ensues. This provides the plot momentum as society becomes increasingly endangered and chaos threatens.

When there’s something strange in your neighbourhood, who you gonna call? Well, in this case, Alice Hotwire, Detective Exorcist. Hotwire joins the lineage of strong, sassy female comic protagonists who more than hold their own in a macho world. Pugh’s colourful art renders Alice almost albinoesque, her pale flesh the most ghostlike of all in a world where the ghosts hum with a blue vibrancy, courtesy of Pugh’s neon, computer-generated colour scheme (which may be garish enough to alienate some readers).

Hotwire’s characterisation is anything but pale and her irreverent nature, wisecracking and disregard for authority has a pleasing Judge Dredd/Anderson deliciousness to it when she spars with her ‘sidekick,’ Mobbely, an old school cop. It takes skill to take traditional tropes like the tired vet and the sassy lady cop and keep them fresh but Hotwire pulls this off. Characters like this, however, do need a narrative to bring them to life and the story, built around the idea of ghosts becoming weaponised, gives Hotwire’s character a solid, if unexceptional, vehicle. The story also has an intriguing political component, presenting a city on the edge of riot and chaos in a society where Homeland Security has grown into a post 911 quasi-fascist organisation. Requiem for the Dead has the Warren Ellis watermark of quality running through it and, in Pugh’s hands, it becomes a story well worth unearthing.