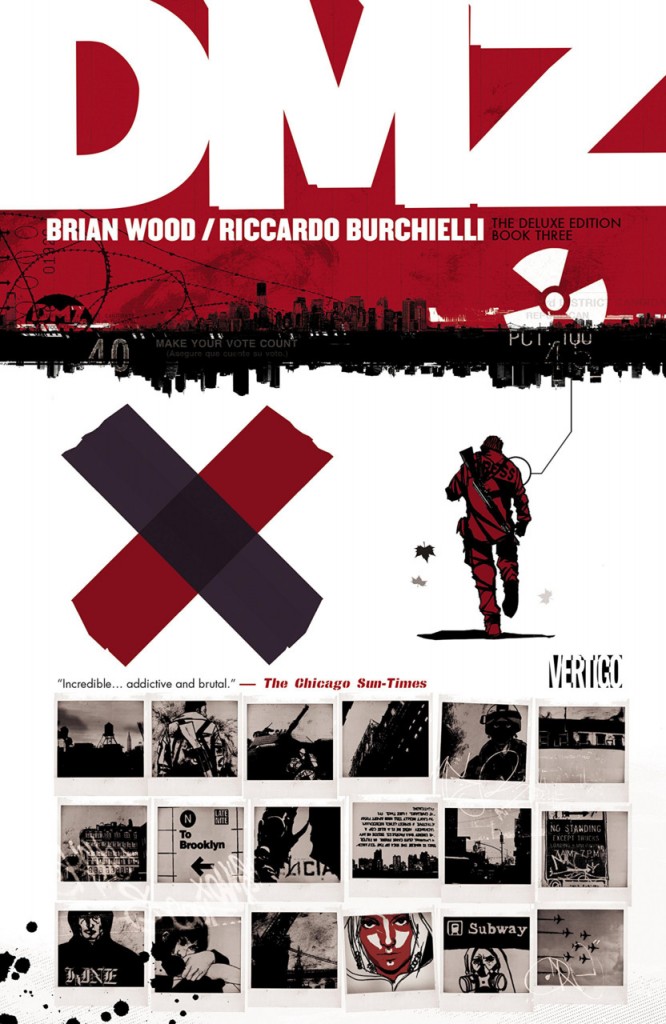 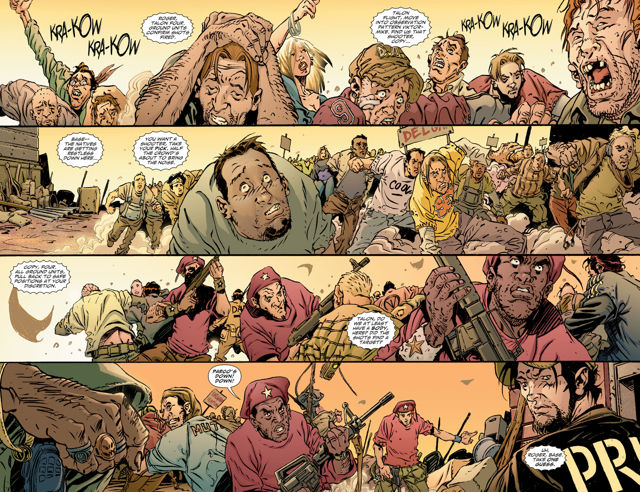 To this point Matty Roth has remained essentially the intern dropped into the DMZ a few years previously. He’s committed to reporting the truth as he sees it to the wider world, and while older, wiser and more prone to questioning he’s still motivated by basic humanitarian concern. ‘Blood in the Game‘ introduces an electoral process to the isolated Manhattan, and Roth finds he’s able to ally his own idealism with the charismatic Parco Delgado, and over the course of the sequences in this collection moves from a commentator to a newsmaker. It’s a transformative journey that eventually costs his soul, but not yet.

It’s in ‘Blood in the Game’ that Roth’s petulant qualities in dealings with his parents seep into the open. Not that either are paragons of virtue, or indeed even pleasant, but while able to deal with the extremes of the DMZ, when it comes to his parents Roth reverts to a resentful teenager. Writer Brian Wood cleverly insinuates that these issues in part inform poor decisions he makes. ‘War Powers’ sees the DMZ transformed, seemingly for the better, and at the core of the story is a rumoured horde of gold left in Manhattan before the mass evacuation. It pits Roth against a friend, a scene that Wood deals with in adroit fashion, and solidifies his new status.

The main stories are all drawn by Riccardo Burchielli, as ever supremely adaptable in delivering the devastation and squalor of people fending for themselves. Any guest artists are matched against the standard he sets, and it’s Ryan Kelly who comes off best in this collection with the three part ‘No Future’. It’s Wood’s examination of what it takes to bring someone to the point where they’re willing to become a suicide bomber. Altogether less appealing is the work of Kristian Donaldson, who’s filled more guest slots than any other artist. Stiff figures, poor motion and unimaginative layouts hardly enhance ‘The Island’ an otherwise novel tale of how American troops and Free States men have reached their own accord. Nikki Cook’s work following Zee as she leaves the security of Delgado’s compound is far more welcome on a simple story with a moral dilemma at its heart.

As with the previous hardback volumes, this comes with copious amounts of sketches and a conversation between Wood and blogger Jason Giampaoli running over aspects of the stories reprinted here.