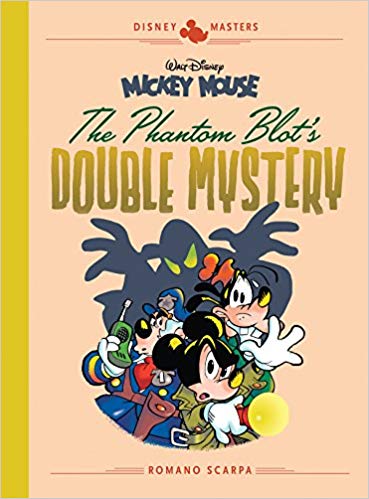 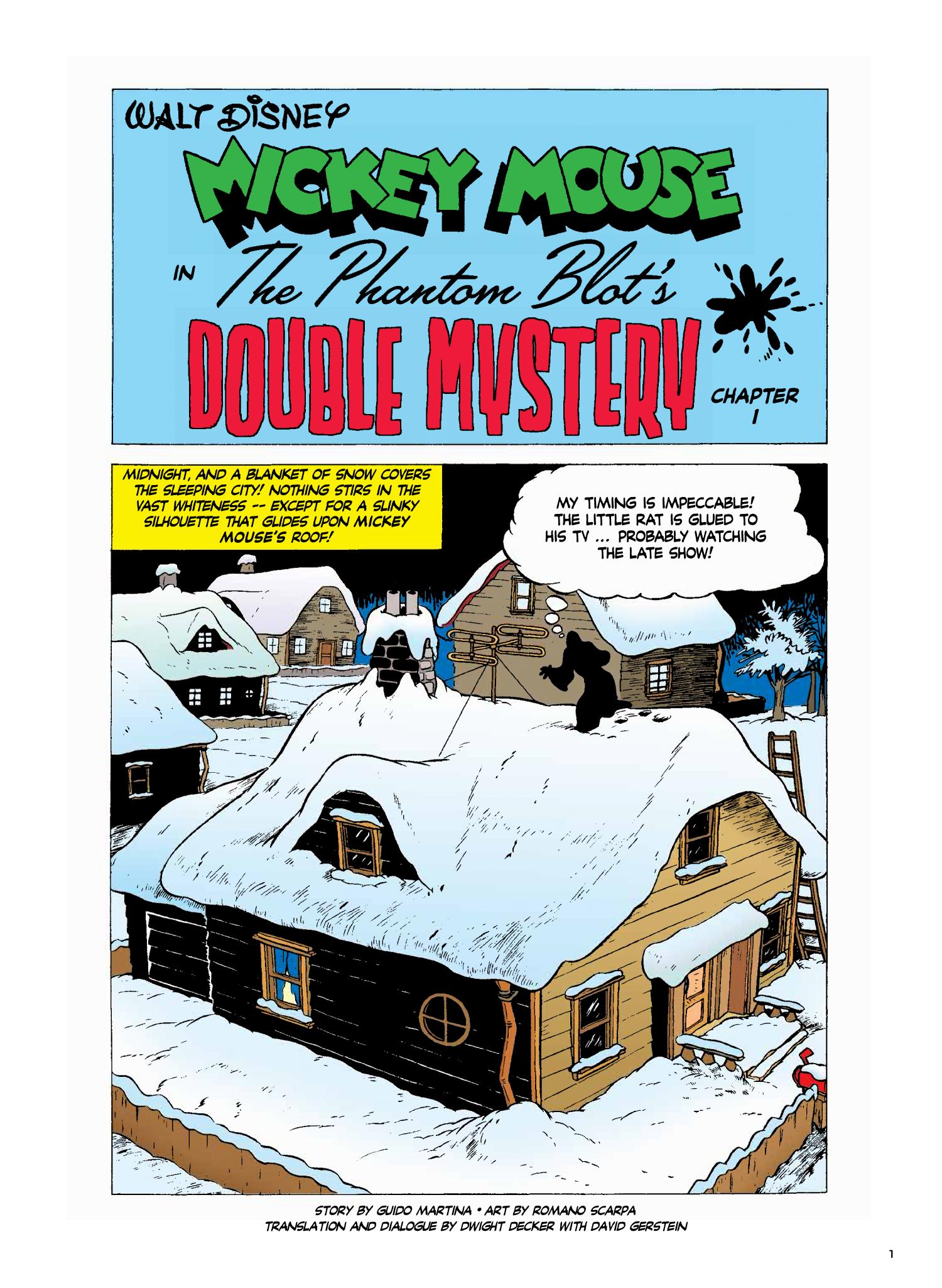 After Carl Barks and Floyd Gottfredson, Romano Scarpa is the most prolific creator of Disney comics as both writer and artist. Unlike Barks or Gottfredson, Scarpa was equally comfortable illustrating Mickey Mouse, Donald Duck or Uncle Scrooge though he is best known as the Mouse Maestro. In The Phantom Blot’s Double Mystery, Fantagraphics prints both Mickey and Scrooge stories as their fifth Disney Masters volume.

Title story ‘The Phantom Blot’s Double Mystery’ is written by Guido Martina with Scarpa on art, and while segments have previously been translated into English, it’s presented here in its entirety for the first time. Mickey’s old nemesis The Phantom Blot has escaped prison and extracts revenge on Mickey for putting him there by tarnishing the mouse’s reputation. Tonally a dark complex tale reading like a crime thriller. this is smartly plotted by Martina, producing a frustration for Mickey and co, the anger and annoyance bubbling over in the cast, something Scarpa catches expertly. Being among Scarpa’s earliest work the illustration here is less refined, yet showing his cinematic vision in the way he changes perspective and points of view. Even this early in his long career Scarpa has a startling ability to imbue energy into his cast’s motions with an exacting eye for detail.

‘The Last Balaboo’ features Uncle Scrooge and the Duck Clan and has previously been published in English, but never in book form. Scooge wakes up with the word Balaboo rattling round his head in annoying fashion, but later finds it useful in curbing the attentions of his would be paramour Brigitta MacBridge. She’s a rich heiress infatuated with Scrooge, created by Scarpa for this story, and a character who’d prove very popular in Europe. He promises her a Balaboo hat if she leaves him alone. Scrooge is rather chuffed with himself until discovering the Balaboo exists and he will have to follow through on his promise. What ensues is an adventurous romp to the jungles of Borneo and back with Donald, Huey, Dewey and Louis in tow much to the cheapskate’s chagrin. It is a lovely and lively story, with a surprising and neat twist.

The final story features Mickey in ‘The Eternal Flame of Kalhoa’, printed here in English for the first time. Mickey reads a story about the Mayan Queen Kalhoa and her love of jewellery that culminates in the legend of the Eternal Flame of Kalhoa, a fire that doesn’t go out. When he rents a room to sailors O’Buliver and O’Galligan, he discovers the myth is real and the pair know the exact location, something someone else desperately wants to know. It’s a pleasant adventure full of hustle and bustle featuring tyrannical sea captains, treasure, submarines and witty dialogue- “Without me those bumble-brains would be dancing the cha-cha to a funeral dirge”. It demonstrates Scarpa’s ability to subvert common narrative tropes and render fantastic entertaining larger-than-life characters.

The Phantom Blot’s Double Mystery features great stories from a man who was fabulous at his craft and had the imagination and courage to add his own mark to characters already developed by such distinguished creators as Barks and Gottfredson. His passion for Disney’s most iconic characters shines through, and his own pleasure in the creative process has a contagious effect on the reader.