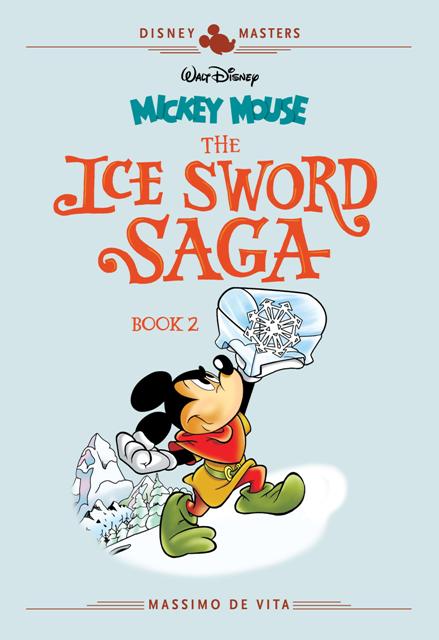 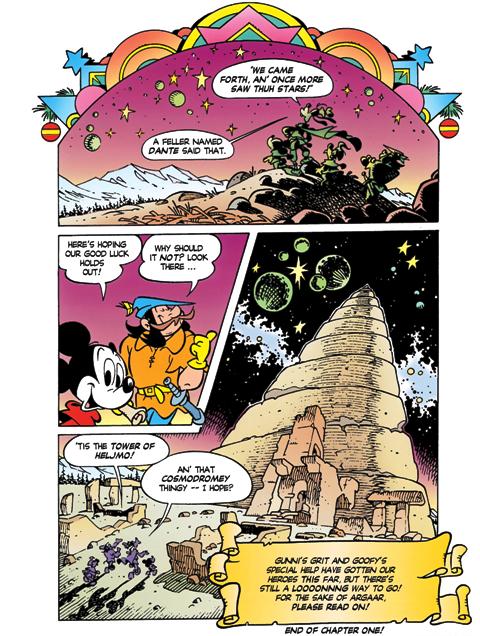 Fantasy/Sword and Sorcery lovers won’t go wrong adding Italian Disney man Massimo De Vita’s The Ice Sword Saga to their reading list. “But it’s a Mickey Mouse story! It’ll be like that movie he’s in…Fantasia!” Most adults hold some childhood trauma from being disappointed that film wasn’t more like Lord of the Rings so we understand your trepidation. There are no such disappointments here.

The Ice Sword Saga Book 1 is a five-star treat that ranks high in the Disney Masters collections Fantagraphics has published so far. Themes of classic fantasy, brilliant art and turns from a familiar cast that both surprise and enchant sets expectations understandably high for this follow-up collection.  It doesn’t disappoint, containing all of Massimo De Vita’s wonderful sequels to Mickey and Goofy’s adventures in Argaar to date – plus a few extras – all in English for the first time.

‘The Prince of Mists’ follows on directly from Book 1, originally part of that volume in the Italian version. The mystical land of Argaar is experiencing a “Snowmageddon” after the titular villain’s magical helm is rediscovered and brings about his return. When Pluto is accidentally transported to Argaar Mickey has to find a way to rescue him, cleverly resolved with phenomenal artwork. While this hybrid of sci-fi and fantasy tends towards the verbose, it is Goofy’s ingenious problem solving that always steals the show.

‘Sleeping in the Stars’ is an even better tale. When a strange sleeping sickness falls over Argaar, Mickey’s and Goofy’s services are again required. There’s a princess to kiss, she just happens to be in outer space and the fun is provided in the antics getting there. De Vita’s inversions of classic tropes and fairy tales are brilliant, full of funny in-jokes and good silly fun reinterpreting the names and origins of planets and constellations. Interestingly, Massimo always sets these tales out like a Christmas special as that’s the season they occur in. You don’t have to save them for Christmas, but unsurprisingly they are more fun at that time of year.

Veering away from fantasy, ‘The Secret of 313’ only highlights De Vita’s versatility. It’s a yarn involving Donald Duck’s classic red jalopy, inspired by a 1937 animated film Don Donald.  When 313 breaks down again and faces the scrap heap, a disappointed Donald regales Uncle Ludwig with how he got it and the sentimental value it holds. The story has a mystical quality and is fabulously illustrated, expressively catching Donald’s wide range of emotions including anger, frustration and joy.

‘The Tiger’s Fiery Eye’ features Mickey on an adventure with Goofy’s adventurous cousin Arizona Goof looking for a statuette with rubies for eyes. Narratively, it isn’t as rich or exciting as the other stories but Gwarsh the art is once again super-duper.

De Vita is not an artist who rests on his laurels, always questing to improve his work with this collection only a snapshot of 24 years worth of art. He’s been illustrating for far longer. Employing metaphor in his work, his introspective tales often carry a social commentary on society at the time (see the essay ‘Song of the Sword’). Read these marvellous stories and you’ll understand why readers clamour for more of the Ice Sword Saga.

Fantagraphics continues the publication of work by Disney artists lesser known in the USA with Donald Duck: The Forgetful Hero.