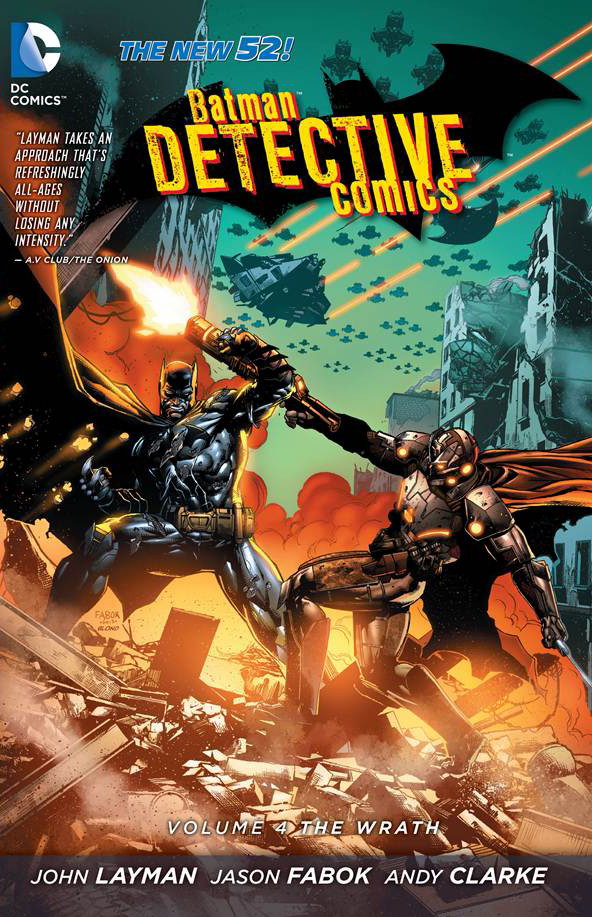 The chapters not directly connected with the title piece conclude the story from volume three in very satisfying fashion with several surprises and an excellent coda. It’s a shame DC couldn’t see fit to package them alongside the remainder, surely possible even with the extended content of the issues reprinted.

The reason for that content was the introduction of Man-Bat to DC’s New 52 universe. This is well handed by writer John Layman, who suddenly has the residents of an entire tenement block transform, providing artist Jason Fabok with the opportunity for a stunning introductory visual. The emergence of Man-Bat is examined via a series of connected stories that spotlight the reaction of the Penguin and the Gotham police, and a chapter delivers the pathos of the Man-Bat remaining at the story’s end. Throughout the book Andy Clarke continues illustrating short stories adding to the Man-Bat mythos.

The art throughout is of a very high standard. Primary artist Fabok combines an obsession for detail with clear storytelling and dynamic design, while delivering a malign Penguin and imperious Batman. All the more impressive is that he also inks his pages to a monthly deadline. The excellent Clarke’s the other major contributor, but Scot Eaton, Mikel Janin, Henrik Jonsson Syzmon Kudranski, Jason Masters, and Dennis Santacruz all deliver.

The character giving the book its title is a new Batman villain with a police killing agenda. Interestingly, Layman makes little effort to conceal his civilian identity with no impediment to the story, emphasising a very capable person with considerable means at their disposal. Amid this story there’s also a fine spotlight on police detective Harvey Bullock with a strong and inventive emotional twist, plotted by Layman and scripted by Joshua Williamson. It introduces another new villain, Jane Doe. Her abilities are those of Marvel villain the Chameleon to all intents and purposes, but the use to which Layman puts her is extremely well handled.

Once again, though, the volume is plagued with references to other stories. Early on, it’s noted that Batman has fallen out with Batgirl and Nightwing, yet the only explanation given is to check another story. As there was no overwhelming reason to include either character at that point, the page featuring them has the odious stench of the sales ploy. It’s not the only example, and while presumably editorial instruction rather than Layman’s inclinations, it’s conniving and cheap.