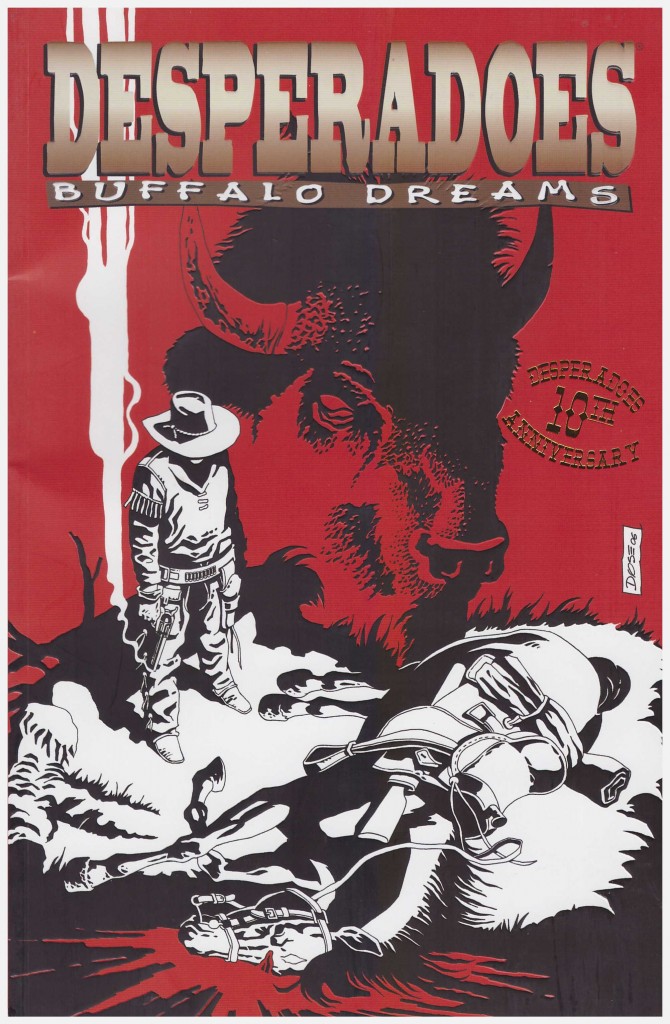 Desperadoes started well, then dipped, and this final instalment is seemingly more personal on the part of writer Jeff Mariotte. Whereas the previous outings have been straightforward Western adventure with hint of the supernatural, the primary horror here is supplied by the way in which the plains buffalo were all but exterminated, and the reasons behind it.

It’s the spiritual beliefs of Native Americans that set this story in motion, with the potency of their visions proved when one member of the gang is saved from certain death. The continuing slaughter of the plains buffalo is accepted, if not approved, but there is greater concern as to why more buffalo are not emerging from a sacred cave in Dakota to replace them. It’s believed that Abby is the key to removing this blockage. As the mission continues the cast members who started out united by a single common cause solidify what they believe their purpose now is.

The artwork of Alberto Dose is very reminiscent of Eduardo Risso, with a similar emphasis on the contrast of shadow and light. He’s certainly very welcome after Jeremy Haun on Banners of Gold, and doesn’t stint on scenery or character.

Mariotte educates along with his story, although in painless fashion. For most it will be a revelation to learn the Native American chief almost universally known as Geronimo was actually named Goyathlay, the name under which he features here. Mariotte supplies the necessary motivation for the main cast to see the plot through, but his usually tight plotting falls by the wayside. At a critical moment Abby suddenly develops a very convenient form of super power, and there’s a mis-step with someone unsavoury known to Clay and encountered by the rest in the opening chapter. Given his circumstances, revenge is an extremely illogical reason for his subsequent actions, which can be attributed to plot convenience.