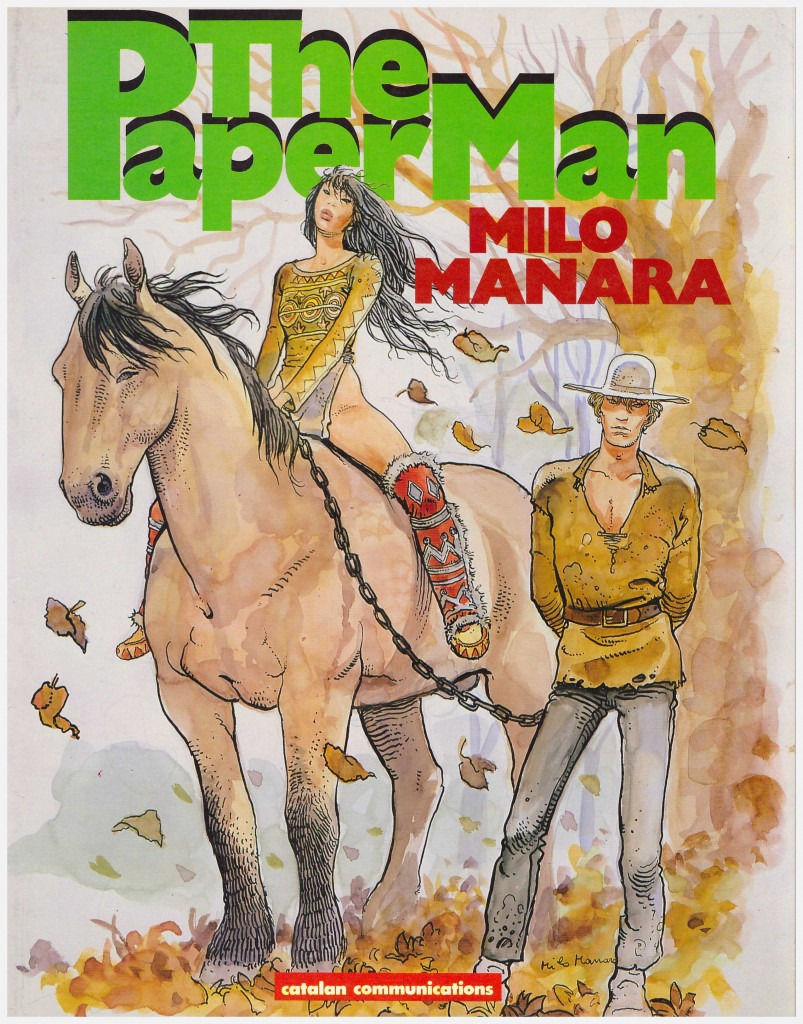 The Paper Man of the title is given no other name. He’s the first character introduced, wandering the canyons of Arizona on an old horse, and the sanest of several that eventually unite on a trip to Fort Laramie. For him it’s a stop en route to his eventual destination in Maine where he intends to track down his love Gwendolyn, at whom he frequently gazes doe-eyed on a photograph. An Oglala native American christens him the Paper Man as he’s in love with a Paper Woman. In reference to her haughty attitude after a rescue from some soldiers, he names her Princess Ass In The Air. Yes, the broad streak of whimsy running through all of Milo Manara’s work has taken no holiday here.

The long shaggy dog story that is The Paper Man seems to be an exercise for Manara to string together everything he loves about Western films. There’s the sweeping scenery, canyons, plains and swamp, the extremes of weather, the native Americans (referred to as ‘Indians’ in 1982), the fort, the cavalry, the bar room brawl, the contrary Indian, the wagon train… And it’s all beautifully drawn in Manara’s fine-lined illustrative style. While over a decade into his professional career, Manara was still developing as an artist, and his line is somewhat looser, giving his cast a greater life than some of his later work.

While the story itself is slim, Manara pours the love in. The scenery is stunningly depicted, and is that the entire Sioux nation coming over the hill? Yes, it is. During the brawl sequence there’s a panel occupying a third of a page into which he crams more people than some American artists draw in an entire comic. In later years Manara would become synonymous with erotica, yet the only woman with a major part to play retains her modesty apart from a bathing sequence that might almost be self-parody had it not been drawn prior to the likes of Butterscotch and Click! The ending loses some dramatic effect, and its origin is somewhat out of place, largely because while he’s drawn them beautifully, Manara has done little to develop his cast. So ultimately, finely rendered fluff.

Long out of print, The Paper Man can now be found in volume 1 of The Manara Library, in greatly improved form with far subtler colour and a vastly improved translation by Kim Thompson.