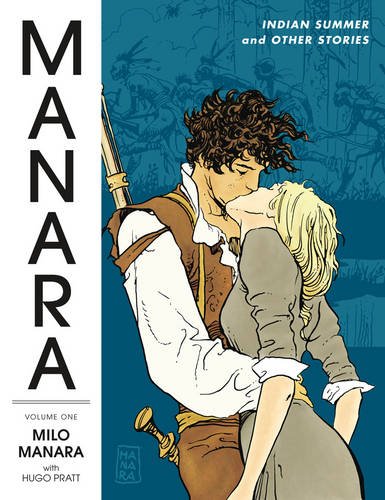 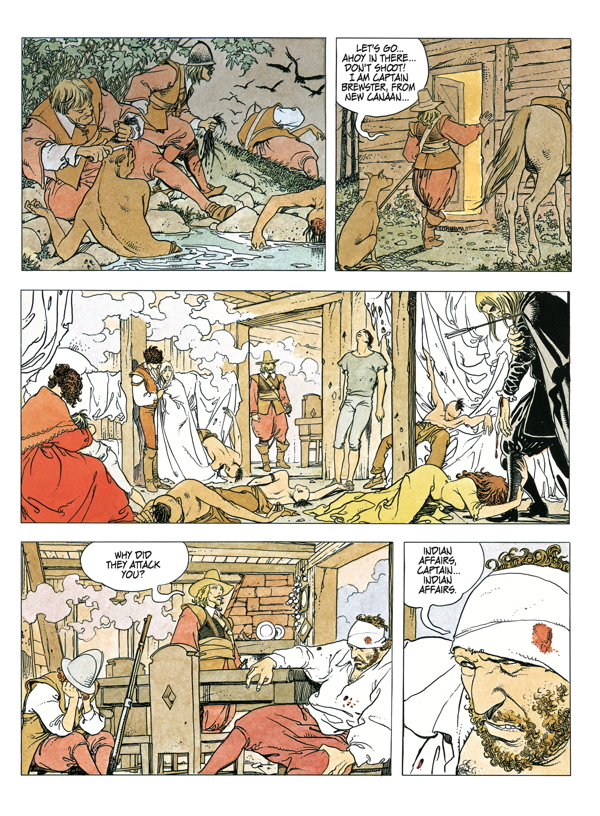 Two such projects are included here. Indian Summer is a compelling emotional drama produced in collaboration with another master of European graphic novels, Hugo Pratt, and the other is Manara’s own whimsical take on the Western genre, The Paper Man.

The latter is inordinately improved for a decent translation. When first produced in 1982 it was a step in Manara’s evolution. After spending most of the 1970s illustrating material written by others, he’d stepped away into the surrealistic adventure of the H.P. and Giuseppe Bergman graphic novels (see volume four), and The Paper Man was an attempt to produce a different type of story. The title character is only ever known by that name, bestowed by a native American woman amused at his constantly staring at a photograph of the woman he loves. Along the way the pair hook up with an old solider, another native American who rides his horse facing backward, and a wanderer with a strange affliction. That all the cast are fatally flawed with the exception of the only female member perhaps provides perspective to those who complain Manara’s later work is universally exploitative when it comes to women.

Unlike some of the work reprinted in volume two, Manara is already the complete artist. His storytelling is first rate, his period impressions convincing, his people move and breathe, and he’s unafraid of detail when required. It looks gorgeous in The Paper Man, and even better in Indian Summer which is given a greater focus by Pratt’s script.

An artist himself, Pratt has no fear of Manara taking over and the art telling the story when possible. His cast display by glance and posture, and his scenery and storytelling is sumptuous. So is his characterisation, with the true villain of the piece a stunning piece of sepulchral design displaying the rot within. Indian Summer is set in the early days of American colonisation, detailing the disintegration of what had previously been peaceful co-existence between the settlers and the native population. Sordid past deeds seep into the open, and retribution is terrible indeed. Several narrative voices combine to relate a complete picture, but each possesses their own perspective. Historical accuracy is paramount. We’re in Nathanial Hawthorne territory as a woman bears a brand on her cheek, Puritanism is still rife, and there’s an implicit attitude that the newly arrived white population is superior to those who’ve occupied the land for centuries.

Pratt and Manara don’t shy from other problematical attitudes of the era. Any male’s consideration of women begins as patronising, and escalates from there, and in the 21st century Pratt’s script is diminished by the inclusion only of women complicit in their suppression. By contrast the book opens with a rape sequence that sets events in motion, and as much as any such scene can be portrayed with sensitivity, this is.

Manara’s inspired by working with his friend and by the historical setting, and while some of his erotica may be more lovingly rendered, the straightforward historical drama of Indian Summer is a strong contender for the best story Manara worked on.