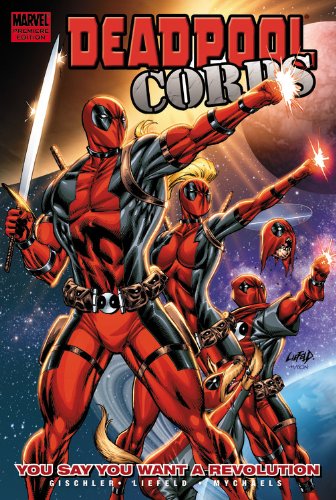 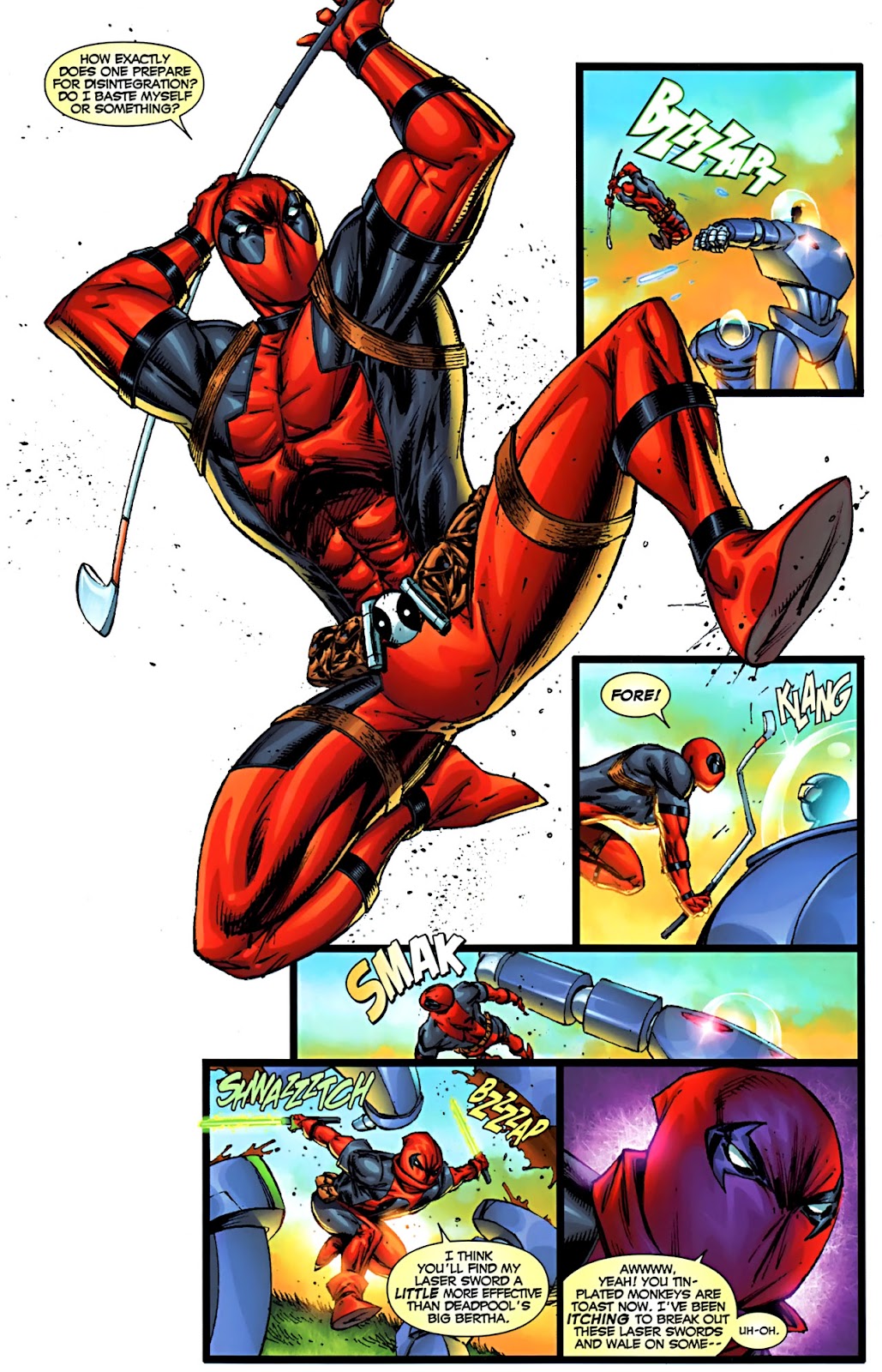 Deadpool is Wade Wilson: an inveterate, unrepentant hired killer who survived cancer and genetics experiments which left him a grotesque bundle of scabs, scars and physical abnormalities but also practically immortal, invulnerable and capable of regenerating from any wound. He is also a many-times-over certifiable loon.

In this iteration Wilson unites with a quartet of alternate Deadpools from very different parallel Earths. There’s a buxom female Lady Deadpool, killer pre-teen Kidpool, a floating masked cranium from Marvel’s Zombiverse dubbed Headpool and a costumed mutt who answers to Dogpool (and sometimes “Cujo”). In Vol. 1 a bizarre concatenation of circumstances has resulted in Deadpool and Co saving creation from the sentience-sucking Awareness. For this they have been rewarded by the Elders of the Universe with a starship (the “Bea Arthur”) and a set of one-use only wishing rings. They’re having fun and don’t want to go home yet, but as card-carrying mercenaries the unlikely champions can never have enough spending money

There’s no change to the successful formula established by Victor Gischler, with pencillers Rob Liefeld and Marat Mychaels, beginning with a wickedly cruel spoof of blockbuster movie Avatar.

Framed through insanely clever fiddling with the narrative technique of flashbacks, the carnival of killer fools accept a huge commission from the vast and unscrupulous Omega Confederation who want the mineral wealth of paradise planet Kagan 7. It’s a beautiful wonderland of flora and fauna inhabited – or perhaps safeguarded – by the deeply spiritual, jungle-dwelling, blue-skinned warrior-race known as the Krook, now enslaved miners. Yet some ungrateful sods are rebelling and demanding their planet back, so the Omega board would like somebody to go and quietly remove all the ringleaders so the peons can get back to digging up all that lovely platinum.

As before, Gischler blends a minimum of plot with an overabundance of sharp gags, snappy one-liners, shtick, shlock and slapstick as the trans-dimensional terrorisers bumble, fumble and smart-mouth their way across the galaxy and over a mountain of oddly-shaped corpses until finally they at last go their separate ways. Gischler displays with extreme clarity how the cure can be worse than the disease, the Deadpool Corps’ last hurrah.

If you like the art, this proves a wonderful antidote to the cosmic angst and emotional Sturm und Drang of most contemporary superhero comics. It’s combined with associated Deadpool Corps material as Deadpool Classic Vol. 12.