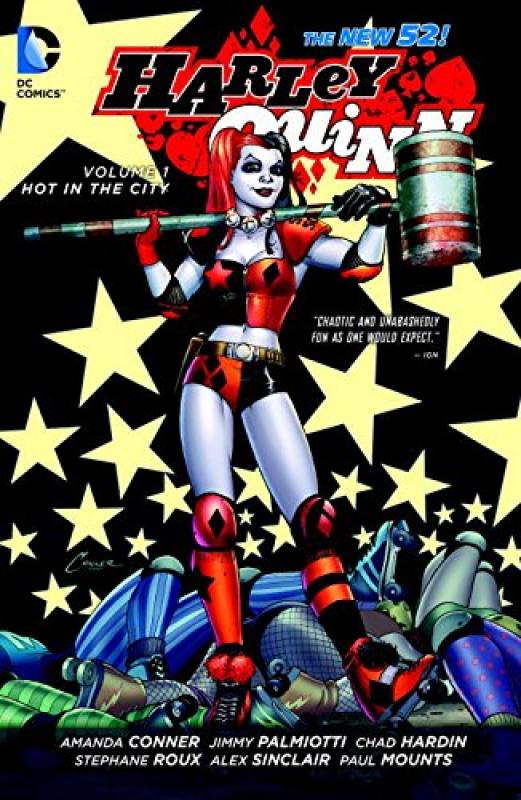 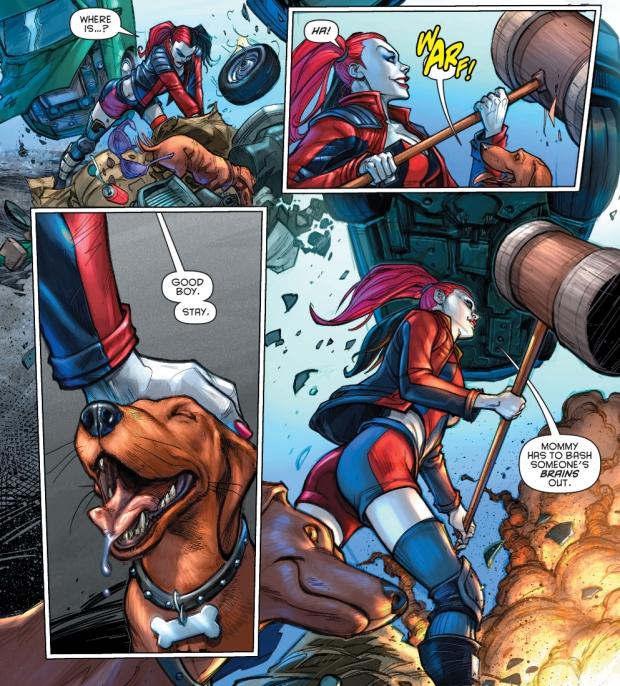 Harley Quinn is back and brighter and bolder than ever with a relaunched series full of madness, mayhem, and metafiction. Leaving behind her life in Gotham, Harley moves to Coney Island to start afresh, making new friends and often enemies along the way. From battling ex-Russian spies, taking on an array of deadly assassins chasing up the price tag on her head, and being hunted through the streets by a pack of loved-up convicts, Harley’s attempts to settle into a normal life are often thrown into chaos.

Every story is deliriously insane, normally jampacked with gore, and full of fun. With every chapter, we are taken a little further into the mind of the lovable Clown Princess of Crime, a dangerous but exciting place to be.

Although the wonderfully bizarre is par for the course, the opening chapter stands out as particularly innovative. This introduction to the series offers some of DC’s finest, each contributing their own style and influence. As Harley Quinn sits reading comics imagining herself as a character, Amanda Conner and Jimmy Palmiotti appear in speech bubbles to guide her through the process of creating the series. Together the three test out different artists, with Harley providing commentary on their work. From Bruce Timm to Jim Lee, robot to Rockstar Harley, the story is packed with inside jokes as Harley repeatedly smashes back and forwards through the fourth wall, almost becoming DC’s equivalent to Deadpool. That’s not to say that Harley Quinn is just a re-imaged version of the ‘Merc with the Mouth,’. She seems to fit naturally into the metafictional tropes and brings many unique and clever experimental twists to the medium, and is often used as a proxy for the readers and in general, comic fandom.

In terms of art, Dan Panosian’s 1960s style page is particularly unique with its minimalistic grey wash background and textured tones, the only colour within comes from the vibrant characters of both Harley and the Joker. After a taste of various artist’s interpretations in the opening story, Chad Hardin primarily takes control of the artwork, and does a fantastic job of bringing the madness to life.

Hot in the City offers a great, fresh introduction to the character and is sure to be a fan favourite. The stories aren’t particularly complex, some are downright strange, but if you take the graphic novel for what it is; a psychotic ride along in the life of Harley Quinn, then it is definitely one to cheer you up on a rainy day. It’s quirky, it’s silly, it’s everything the character should represent, and is both a credit to her creators, and a modern and unique take on one of DC’s most popular characters. It continues in Power Outage.

To coincide with the 2020 Birds of Prey movie, this collection was repackaged as Birds of Prey: Harley Quinn.