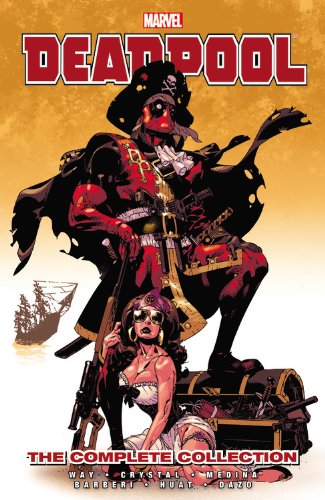 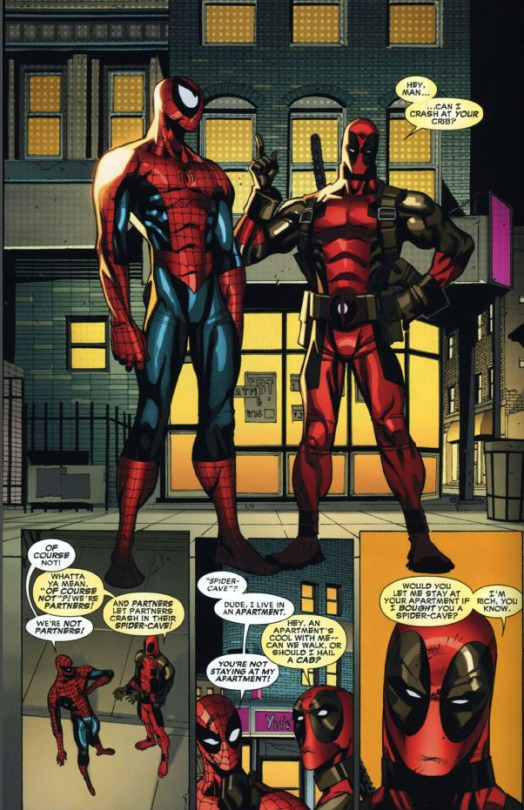 Even at cover price this is a value for money collection of Deadpool material. It encompasses four paperback collections, including one the highlights of Daniel Way’s run, Monkey Business, and while not everything is top drawer there’s still enough good material to justify the purchase.

As Marvel have been reducing the content of their paperback collections, this also incorporates X Marks the Spot, What Happened in Vegas and I Rule, You Suck. Early in the book Deadpool mulls over what he really wants from life, concludes it’s admiration and respect, and much of the remaining content is an attempt to achieve this. Of course, being Deadpool, the hallucinogenic nut job, the way he goes about it is far from logical.

Way has toned down the non-stop verbiage of previous writers, and if not presenting a thoughtful Deadpool, at least it’s one who pauses for breath between quips. “His name is Hit-Monkey. He’s a hitman who’s a monkey”. Pause for breath. “You don’t believe me.” “No, of course not”, responds a sceptical Spider-Man.

It’s the ‘Monkey Business’ section that’s the highlight. Spider-Man is puzzling over how a room full of people could be killed in peculiar fashion, and we have the above dialogue. Hit-Monkey, as preposterous as it sounds, is exactly that, and he’s fantastic, with more character than you’d ever imagine. Way’s plots don’t always work as well as you’d hope, but when they do, they’re great. He varies his style within the farce and confusion genre, and sets up some gags beautifully.

In volume one most of the art was down to Paco Medina, and while he draws the X-Men story, that’s his swansong, and Carlo Barberi is the prominent artist here. His style is manga-influenced, and that fits awkwardly at times, with an oddly angular Peter Parker for a start. Barberi, though, is infinitely preferable to the mugging of Shawn Crystal, on a not as good as it sounds pirate story, or the distortions of Bong Dazo on the every bit as good as it sounds vampire story.

As high as standards might be overall for superhero comics post 2010, not an awful lot of them can be slotted into the ‘fun’ category, and even in the lesser material here Deadpool is fun.