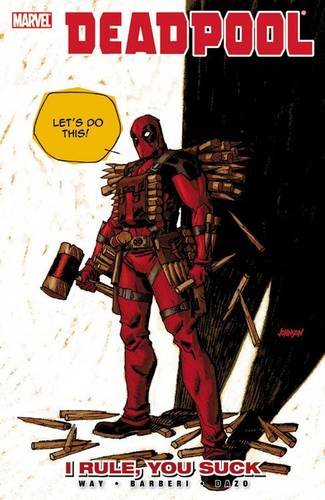 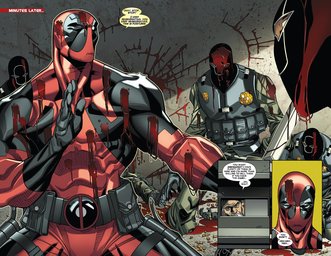 “They can regenerate, so now can we do the grenade down the throat?” A question, surely, that each of us has at some time pondered, but one that Deadpool ponders more than most. After the adventures in Las Vegas, appropriately enough collected as What Happened in Vegas, Deadpool is still on a quest for admiration and respect, and it seems as if he’s hit the jackpot as far as that goes when he’s asked by Steve Rogers to join the Secret Avengers.

Captain America, Black Widow and Moon Knight are on a mission to wipe out known weapons caches hoarded by terrorists, survivalists and militias, and to Deadpool that’s a sure way to earn some respect. Yet, as far as that goes, it seems he’s down with Rodney Dangerfield.

After the relatively ordinary previous book, Daniel Way’s now back on form. As we all know, Deadpool would try the patience of a saint, and the nearest to canonisation in the Marvel universe is Steve Rogers, so that’s an interesting scenario for a start. Then we have the return of nutty villain Doctor Bong in possibly the only title other than Howard the Duck that he’d actually fit without eyebrows being raised. And does anyone else find it funny in context that the next story is illustrated by Bong Dazo? Way spins out an appropriately preposterous story, and his Deadpool may still live in Loopy Land, but he’s toned down the constant patter.

It’s Carlo Barberi back to cartoon simplicity on the main tale, including a ludicrously bulbous Black Widow, but elsewhere he’s more impressive, particularly when an army of clones are needed. Better not to ask why. This is Deadpool. Dazo illustrating the remainder puts a lot of effort into detail, but his Deadpool is not a pretty sight. He sprays his costume on, has developed muscles that don’t exist on normal people, contorts into impossible poses and sometimes has a cube for a head. Deadpool has always been about exaggeration, but this is plain horrible. Dazo, though, improves in future volumes.

This art is a shame because Way’s story about a war between factions of vampires is very funny. Deadpool gets some classic lines – “That’s your first mistake. Assuming I’m thinking, but don’t worry. Everybody does that.” – falls in love, is involved in some classic mayhem and Way delivers a brilliantly preposterous finale. Were it not for the art it would be among the best Deadpool yet.

The content can also be found in volume two of Deadpool by Daniel Way: The Complete Collection, and Space Oddity is the following collection.