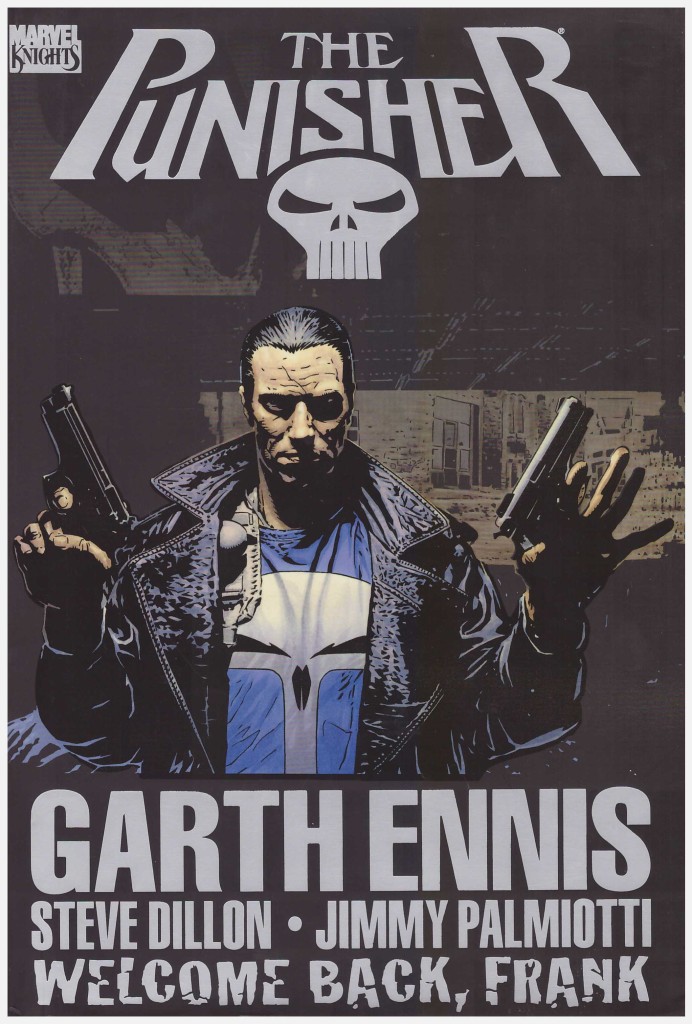 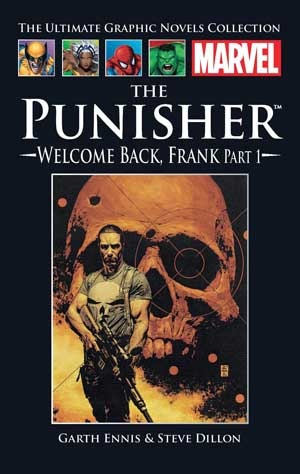 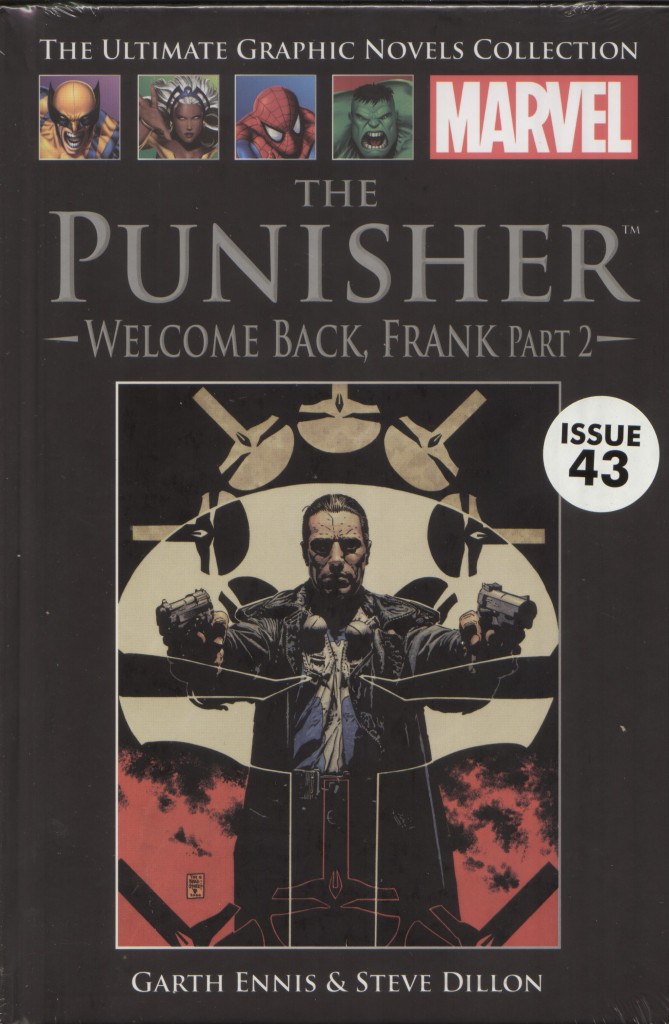 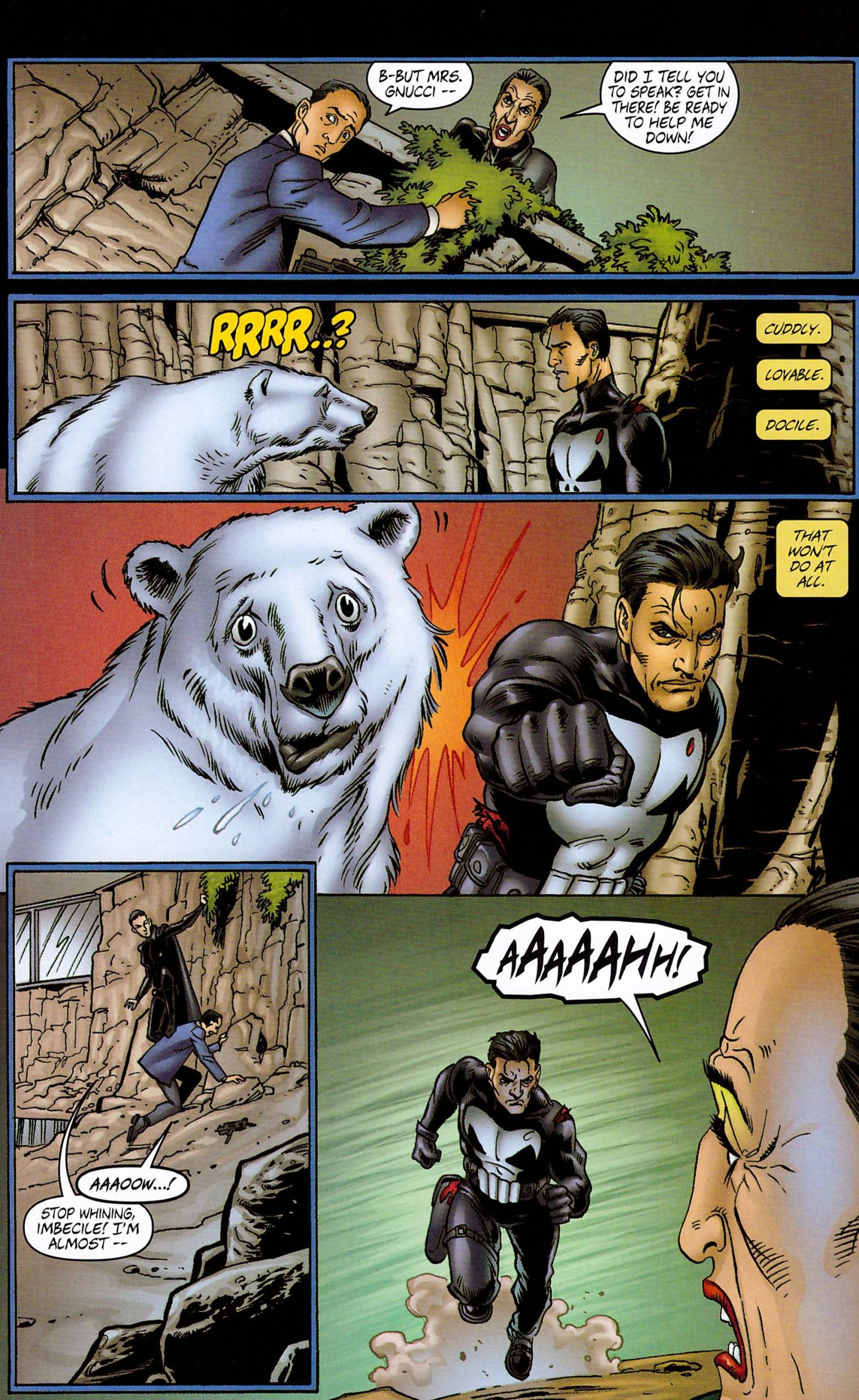 The Punisher’s seemingly unstoppable rise in popularity from the late 1980s led to expansion of his titles, and then the consequent drift into mediocre formula and cancellation a decade later. A previous re-boot had misguidedly re-cast him as an assassin working for angels.

It was probably only a writer whose youth was spent absorbing the incredulous exploits of the action heroes in British comics who could have conceived adding humour to the Punisher’s grim vista. Yet Garth Ennis’ approach worked spectacularly, and the millennium published Welcome Back Frank became the most acclaimed Punisher story since Circle of Blood in the early 1980s.

The declaration of intent is there from the opening splash page. Steve Dillon depicts the Punisher holding a machine pistol under the chin of a sleaze in a white suit with a ponytail. Only just in view are packets of powder, a suitcase of money and some still bleeding corpses. “And get a haircut” intones the Punisher.

The success of the treatment depended on the Punisher being played absolutely straight while surrounded by idiots, and Ennis supplies these by the dozen as Dillon provides the depictions of the Punisher as steel-eyed, perma-frowning Judge Dredd analogue. In this incarnation there’s no anal-retentive fixation on photographic reproduction of a recognisable brand of gun. They’re not required to patch over narrative shortcomings.

Ennis immediately dismisses the Punisher’s previous incarnation (“Tried it. Didn’t like it”), delivers some hilarious set-pieces, and the misfits with which he populates this story are wonderful. Chief among them is Detective Soap, a perpetual source of ridicule among his police colleagues, and co-opted by the Punisher as a source of information. Ma Gnucci is a pinch-faced, bile-fueled Mafia widow, the Russian a preposterous testosterone brute, and Spacker Dave pierced and studded to the max. Beyond that there’s a broader satire. Ennis introduces Punisher wanna-bes, and elite military units, as well as providing the usual cannon fodder with some great comic dialogue: “There was burnin’ cars, an’ blood an’ smoke everywhere. We figured, well, better to come here for more guys and try again you know?”. “I am founding member of Daredevil, Man without Fear, club of Smolensk!”

This would all be surface were there not tension-driven plots to back it all up. Early on there’s a definitive Daredevil and Punisher set-to, and Ennis’ scripts are very morally driven. Everyone who deserves it gets what’s coming to them, usually in perverse and stomach-churning manner. Dillon’s flat art is ideally suited to the comic mayhem, and he’s really well served by the inking of Jimmy Palmiotti. Without the credits to tell you, the assumption would be this is Dillon inking his own pencils.

By the time Ennis inherited the Punisher he’d been starring in his own series and a plethora of graphic novels for almost twenty years, and Welcome Back Frank bettered any of it. Those who’d prefer to absorb all of Ennis’ and Dillon’s Punisher in one gorge can find this collected along with the following five volumes (Army of One, Business as Usual, Full Auto, Streets of Laredo and Confederacy of Dunces) in the Punisher by Garth Ennis Omnibus. It’s also been printed over two volumes in the U.K. as part of Hachette’s Ultimate Graphic Novels Collection.