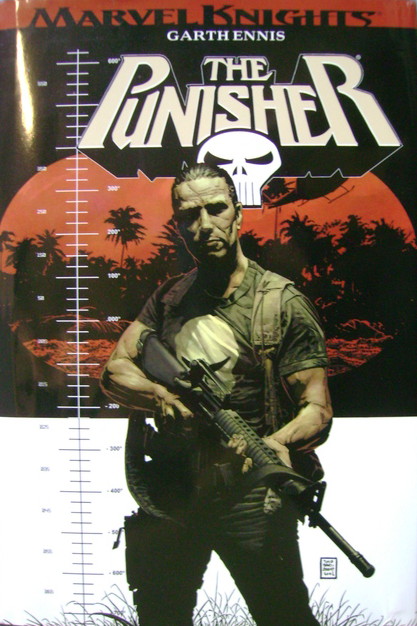 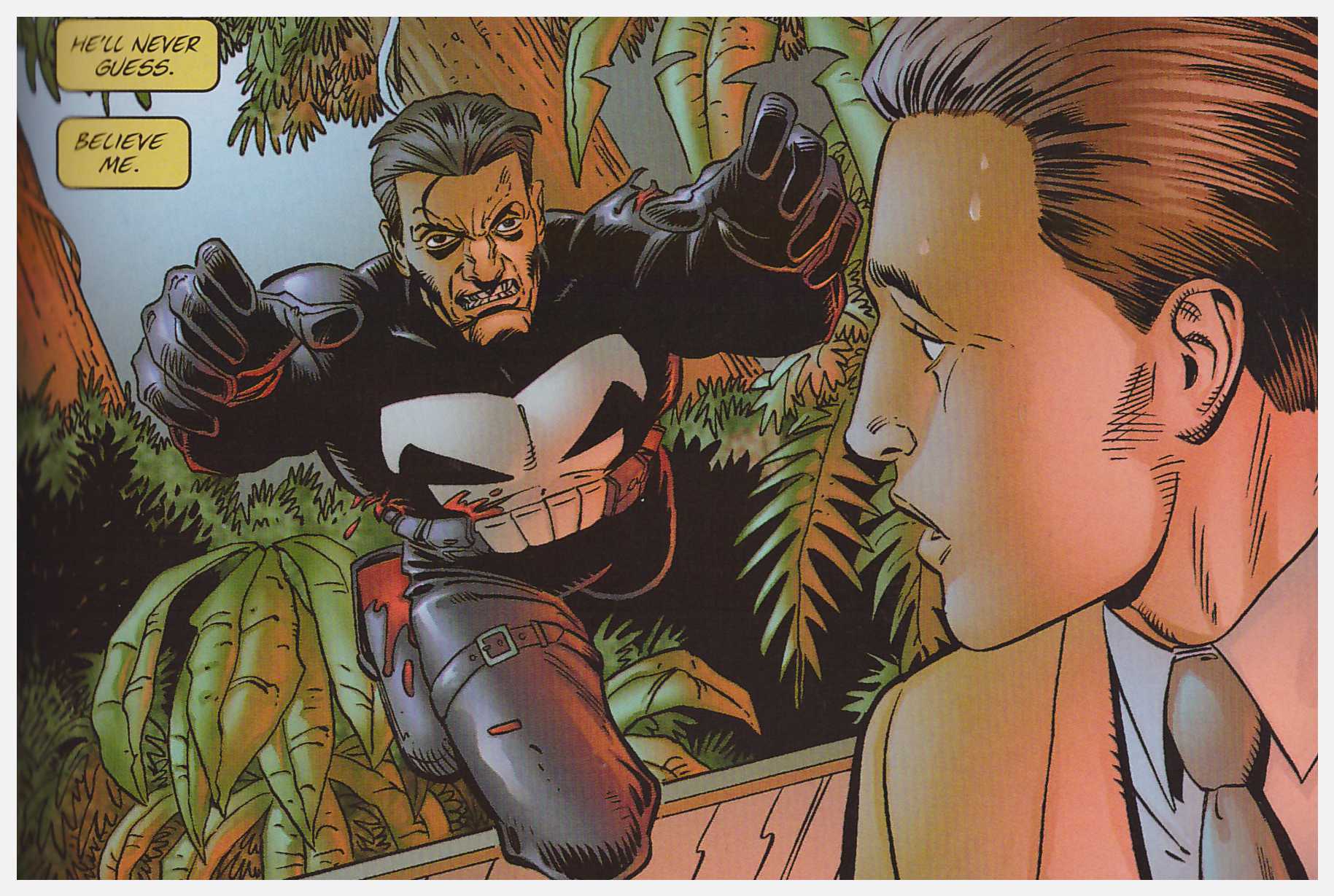 Garth Ennis wrote two distinct incarnations of the Punisher, although they blur a little in some material here, and this was his start on the character, mostly in combination with Steve Dillon, both transferring over after Preacher concluded.

Their approach was to treat the Punisher completely seriously, but populate his world with misfits, idiots and incompetents in the manner of Judge Dredd. It works best with the opening twelve chapters of comedy mayhem comprising ‘Welcome Back Frank‘, in which he wages war against an organised crime family run by the disgusting Ma Gnucci, while dealing with a trio of people he’s inspired to kill, a sad sack police detective and his motivated partner and the oddities sharing his apartment block. “Tonight is the night I close down the Gnuccis for good. Can’t think of a reason to be subtle about it”, just about sums up this Punisher.

Thereafter there are brief episodes matching that opener, notably a story in which the Punisher is commandeered, the oddest Spider-Man team-up ever, and a two chapter trip to Latin America, but otherwise the best tale is a visit to Belfast. The only humour is very black as Ennis dissects the problems of his home town, and the minority perpetuating religious hatred for profit.

As the book continues other artists also contribute, with Cam Kennedy’s cartooning being the finest of them, but taking a while before full appreciation dawns, such is the contrast. His characterisation is particularly memorable in a tale where the Punisher visits Texas to close down an arms supply chain.

This, though, is a collection of diminishing returns. From around the midway point Ennis is largely on autopilot, and whereas the earlier material is hilariously compelling, the later material is padded, and often bereft of imagination.

Two stories not featured in other collections are found here. A gangster’s trip to the dentist, almost entirely drawn by Joe Quesada from a viewpoint within the patient’s open mouth is very funny. ‘The Punisher Kills the Marvel Universe’ does what it says on the tin. This is an alternate universe Punisher, an army officer until his wife and children are killed as New York’s heroes unite to prevent an alien invasion. “You murdered some of the nation’s greatest heroes and the X-Men Cyclops and Jubilee”, intones the Judge as he sentences Castle to life imprisonment. There are few other jokes, but not much creativity otherwise, and Dougie Braithwaite in 1995 wasn’t the artist he’d become.

This long out of print oversize hardback now commands premium prices, and given the deteriorating quality curve interested readers are better advised to look out alternate versions of the content. These can be found as Welcome Back Frank, Army of One, Business as Usual, Full Auto, Streets of Laredo and Confederacy of Dunces. The omnibus was published before it could include a later follow-up, The Resurrection of Ma Gnucci.