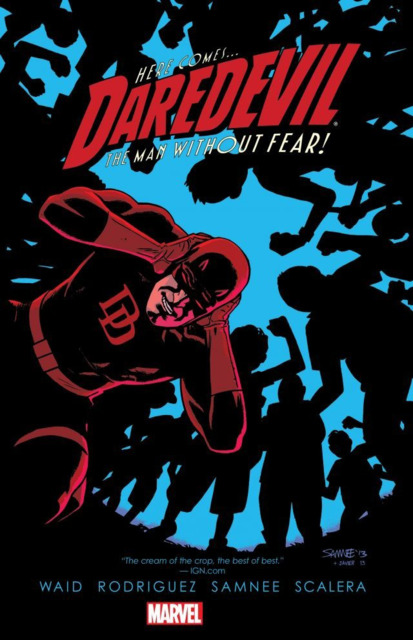 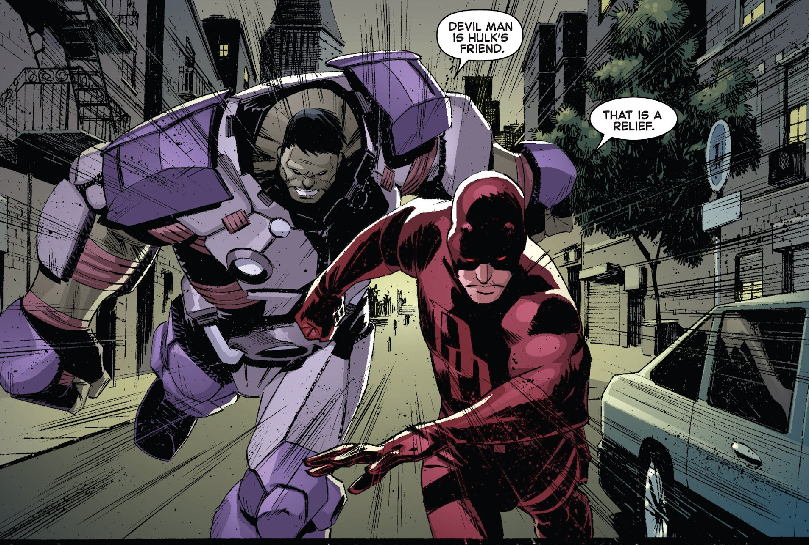 Once again this collection showcases the sheer variety writer Mark Waid brings to Daredevil with three stories completely different in tone and mood.

In the opener we’re introduced to Nate Hackett, first in the past as he was to a young Matt Murdock still with 20/20 vision and then to his present day incarnation as a radio engineer needing legal representation. It’s a fascinating chapter, not least because Waid plays completely against type with his portrayal of the young Murdock. Hackett’s character is very well defined as someone who’s not the sharpest tool in the box, but fundamentally lacking in malice, yet who can none the less be sucked into events that may not match his inclinations.

It leads to what’s surely the most offbeat courtroom sequence in Daredevil’s long history, with confusion sown like seeds and everyone but Daredevil uncertain about who’s part of what proves to be a large scale infiltration. This plot continues through to the next volume, but first here both Daredevil and Matt Murdock have other matters to contemplate.

Throughout this series Waid has been very open to crossovers, which is an outlook he applied to the Hulk series he was simultaneously writing. In that series Bruce Banner is employed by covert security agency S.H.I.E.L.D., and his attorney, should such be required, is Matt Murdock. A mission to prevent imported weapons falling into villainous hands goes somewhat awry, and it takes Daredevil and the Hulk to set matters right in a cleverly plotted two chapters.

If there’s one Marvel superhero whose concerns you might imagine to be several leagues above those of the street level Daredevil, it’s the Silver Surfer. So, of course, Waid throws him in. The surprise of the teaming and the plot twist are really the purpose of this story, which drops into the lesser box when ranked among the series as a whole.

There’s quite the variety of artistic styles on display here, with the least appealing being Matteo Scalera’s work on the Hulk story. It’s an ugly melange of extraneous lines and grimacing faces, most in stomach-churning close-up. Series colourist Javier Rodriguez is also an accomplished artist, with a fine-line reminiscent of that employed by Marcos Martin. Rodriguez, though, has a different, but equally valid method of laying out his work. Regular artist Chris Samnee’s sole contribution is the Silver Surfer story, which doesn’t really play to his strengths. He’s never less than professional, but his Silver Surfer is hardly imposing.