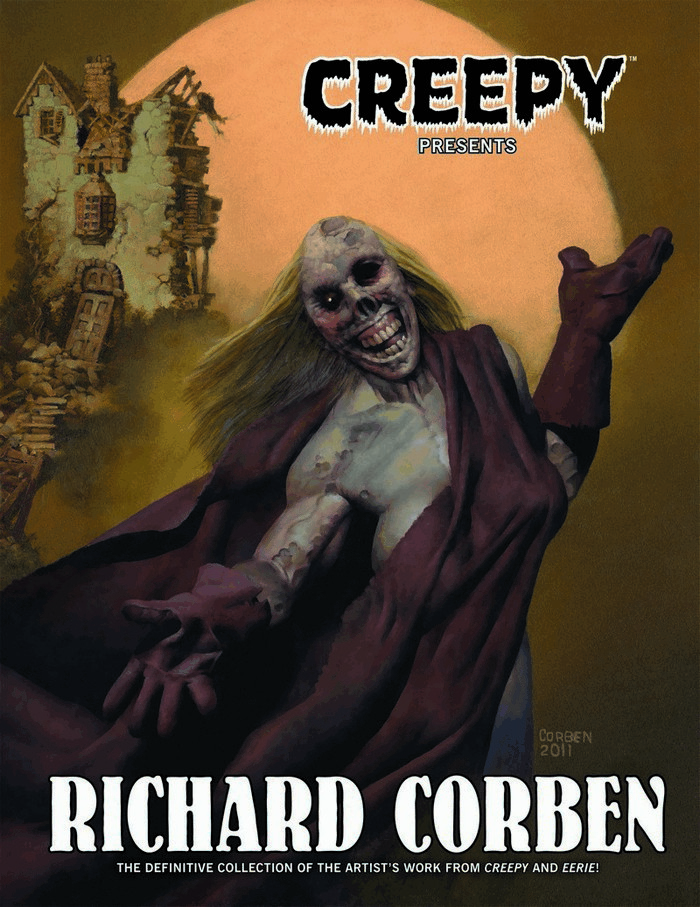 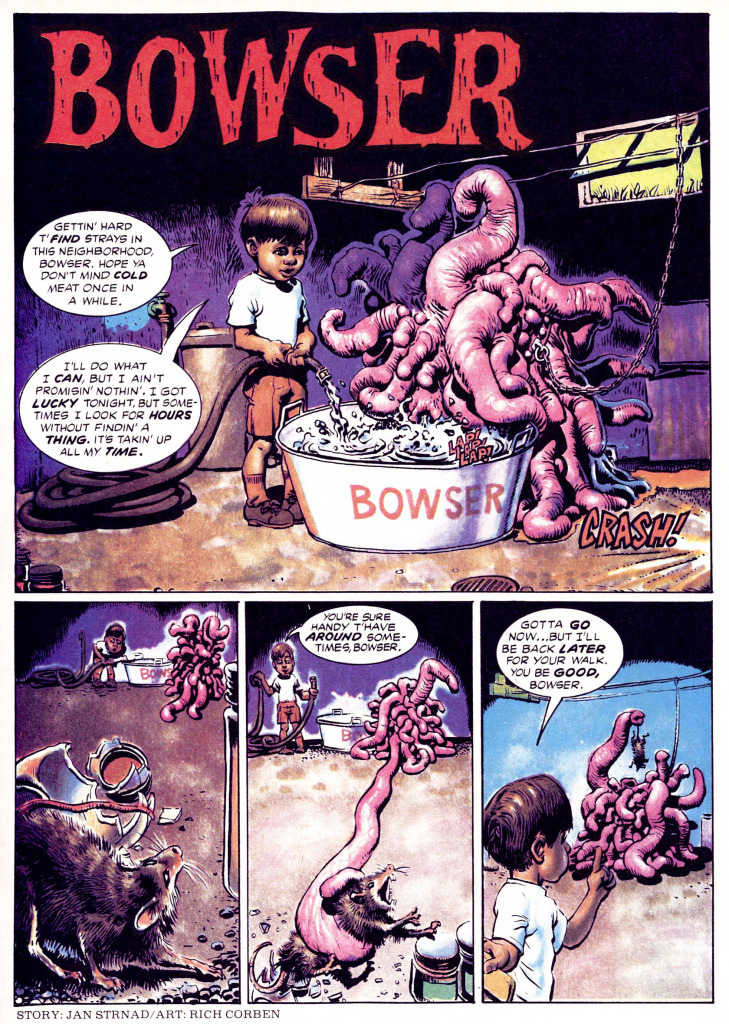 Creepy Presents Richard Corben contains forty stories and ten covers that the artist produced for the Warren magazines Creepy and Eerie between 1970 and 1982. Writing duties are handled by a variety of people, some of whom Corben would work with again (Jan Strnad, Rich Margopoulos and Bruce Jones). Sadly, the quality of the writing rarely matches the quality of the artwork, with most of these stories poorly written and many downright amateurish.

We begin, in chronological order, with the Creepy material, kicking off with a half-dozen early black and white shorts. Then it’s ‘Lycanklutz’, the first noteworthy story, and the first in colour. It’s also the tale for which Corben deservedly won his first, though not last, Warren’s Best Artist/Best Writer Award.

‘Change… Into Something Comfortable’ is the second of three werewolf stories, and it’s great: funny and beautifully drawn. Corben has a real talent for drawing werewolves.

‘The Hero Within’ is a disturbing tale of child abuse that features a buxom maiden and a muscular protagonist, and would appear to be an early template for much of the work Corben would later do for Heavy Metal, such as Den.

‘The Raven’, ‘The Oval Portrait’ and ‘Shadow’, are all worthwhile Edgar Allen Poe adaptations, and Corben would later devote a great deal of his time to adapting more Poe (see Spirits of the Dead).

‘In Deep’ is truly superb: an undeniable masterpiece. Riding the wave of the massive popularity of Spielberg’s Jaws, this is a photo-realistic story pitting man against nature. The shock ending is perhaps a bit clumsy, but the story as a whole is terrifying and remarkably effective.

In the section reprinting stories from Eerie, outstanding pieces include ‘Child’ and ‘Childhood’s End’, both featuring a creature that’s more than a little reminiscent of Frankenstein’s monster, but with a child’s head, which looks rather disturbing. The colouring and art on both are excellent. We also have a couple of bloodthirsty tales featuring the Butcher, a vigilante who looks almost exactly like the Shadow (and the artwork owes an obvious debt to Will Eisner’s Spirit stories). Though neither tale displays much originality, the art is nice.

‘Within You… Without You’ is the first part of a trilogy comprising the longest presentation in the book (the others are ‘Time and Time Again’ and ‘Years & Mind Forever’). Writer Bruce Jones throws everything but the kitchen sink into a story that makes up with thrills for what it lacks in sense. Corben’s dinosaurs are superb, even if many of them now look a bit dated, post-Jurassic Park, and this story was another that won the artist a Warren’s Best Art Award. Jones and Corben would later produce Rip in Time, with a remarkably similar setting and premise.

This is the largest collection of Corben’s work to date, and it’s a real shame that it covers such a short period, and from so long ago. Corben was one of the most popular artists to ever work for Warren, and this collection is a real treat for any fan of the artist, one of the undisputed giants of the underground and horror comics scene. Just don’t expect too much from the writing.