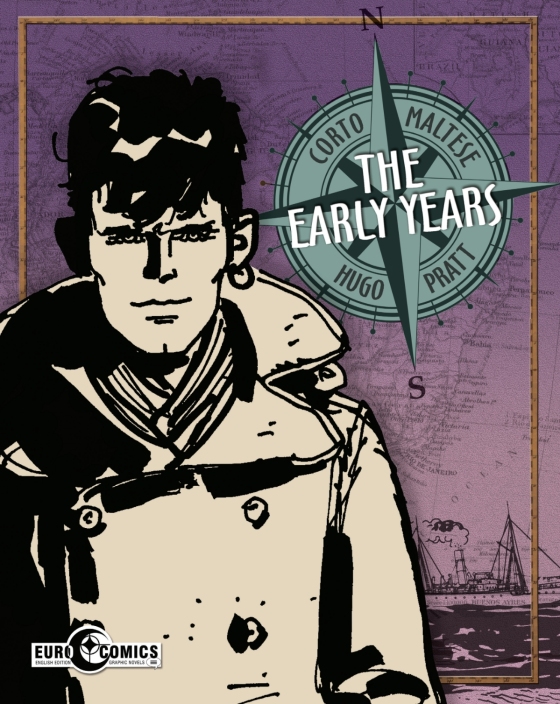 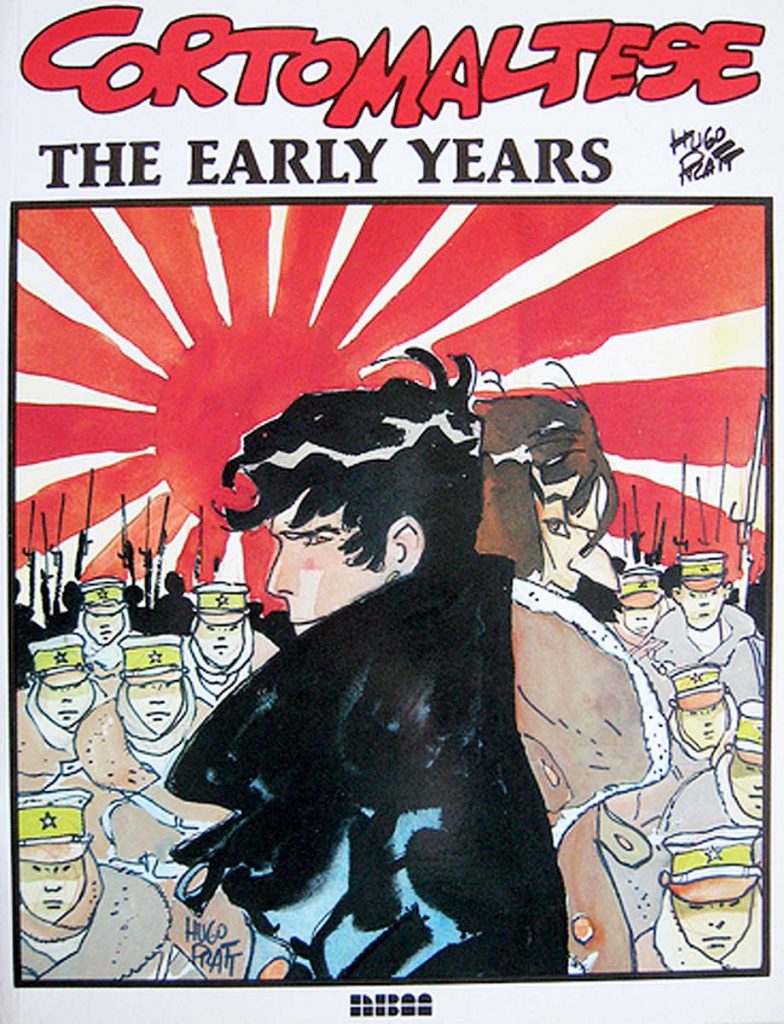 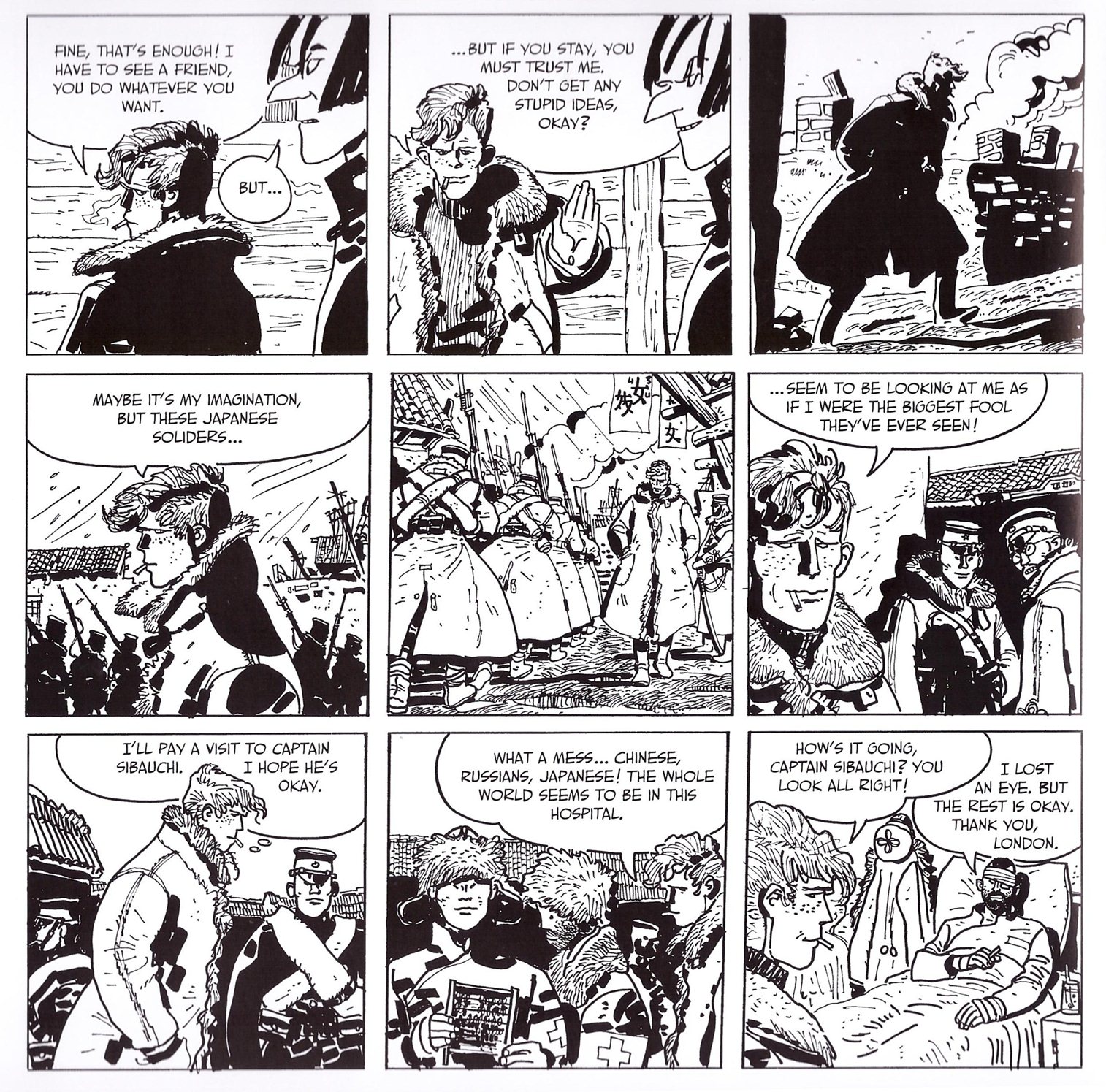 Coming in at a compact 64 pages in total, less than half of it strip content, The Early Years is by far the slimmest of the EuroComics Corto Maltese editions, and one of the most unusual. For starters the pages were created for serialisation one tier at a time in Le Matin de Paris, and then having kept some secrets about Corto Maltese for years, Hugo Pratt decided to reveal the first meeting between Corto and Rasputin. As Sylvain Tesson’s introductory essay notes, Pratt always prioritised a story opportunity over any continuity pieced together for Corto Maltese, and when the time came to consider The Early Years the historical setting he wanted to investigate was Russia’s ill-fated war with Japan. It slightly contradicts what Pratt previously disclosed.

The opening page establishes that Rasputin was already impulsive and murderous in 1905 when he first ran into Corto, ignoring the armistice ending the war. What’s here is very much his and Jack London’s story, Pratt seemingly intending this as a prologue to his main adventure, as while he seizes on London being in the area as a war reporter, Corto is mentioned but it’s 25 pages in until he puts in an appearance. London is with the Japanese when Rasputin is captured, and is also characterised as impulsive, but via a scene open to interpretation. It’s a gloriously ambivalent piece of writing. Do we take London at his word or is his bravery prompted by self-interest as the lesser of two evils? Following him around for several more pages produces no definitive answer.

Pratt worked on The Early Years between The Golden House of Samarkand and Tango, so his late 1970s linework delights, Rasputin’s profile gleefully drawn in just two continuous lines in some places. The simplicity contrasts the wonderfully composed detail of the sample panels when London goes walking outside. The first page is the densest, showing the carnage of the battle about to be halted, the well researched Japanese and Russian uniforms adapted for the freezing conditions and Rasputin introduced, looking younger and less worn than in other books. Pratt’s art can look so simple, yet there’s an accompanying richness of personality beyond so many artists with reputations.

From most other authors an unfinished story would be unsatisfying, and its publication just an exercise in completion, but many Corto Maltese graphic novels are episodic, and can be seen as several stories linked together. In that sense The Early Years tells a complete story, just one without much of Corto himself. It’s uncertain how much longer Pratt intended to continue his story at the point when he fell out with the newspaper management. Despite requests, Pratt refused to bring matters to a conclusion for other publishers, although his basic outline is known. However, after his death another four and half pages continuing the story were found, thought to have been produced around 1990, suggesting Pratt eventually did consider completing The Early Years. Those pages are reproduced here, along with plenty of sketches, and illustrations, including what was the cover to the 1980s NBM edition. Although that’s in colour, it lacks the extra pages, and the EuroComics version has more careful translation and is  altogether better presented.