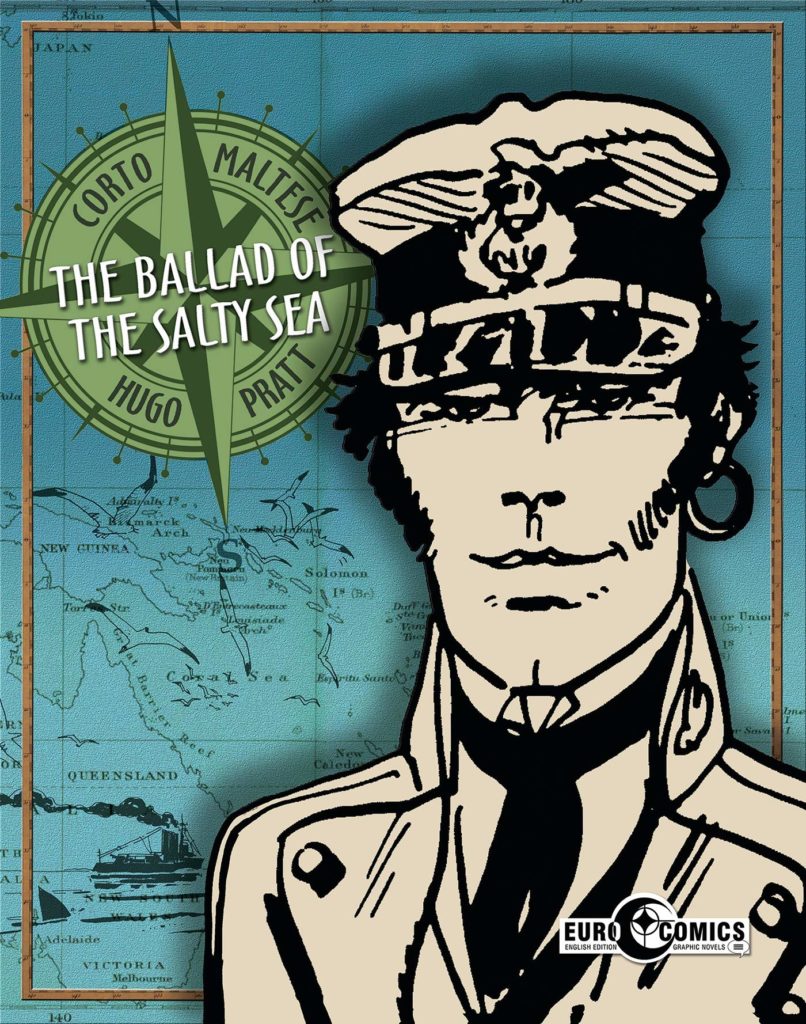 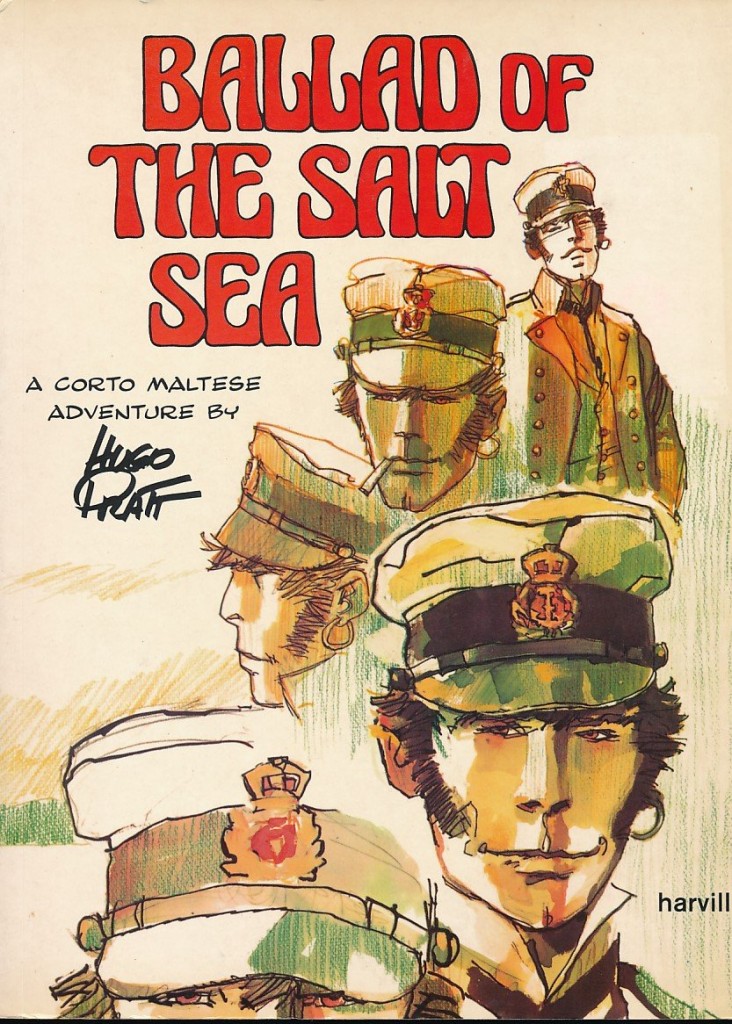 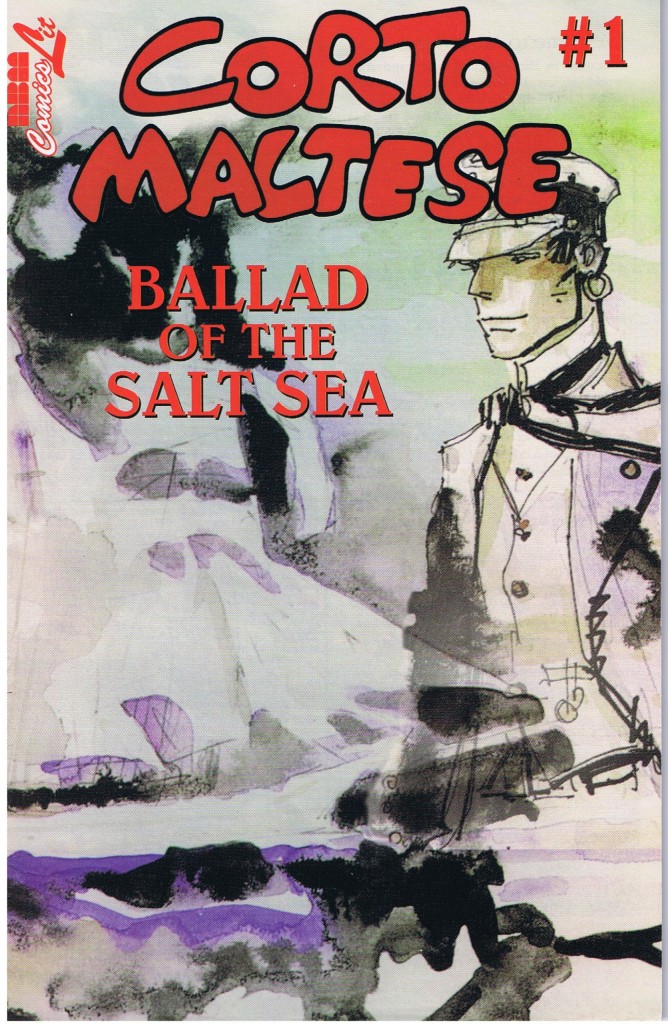 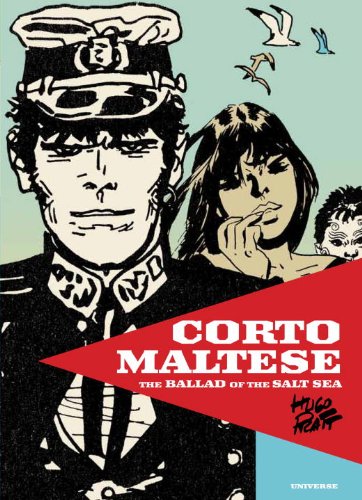 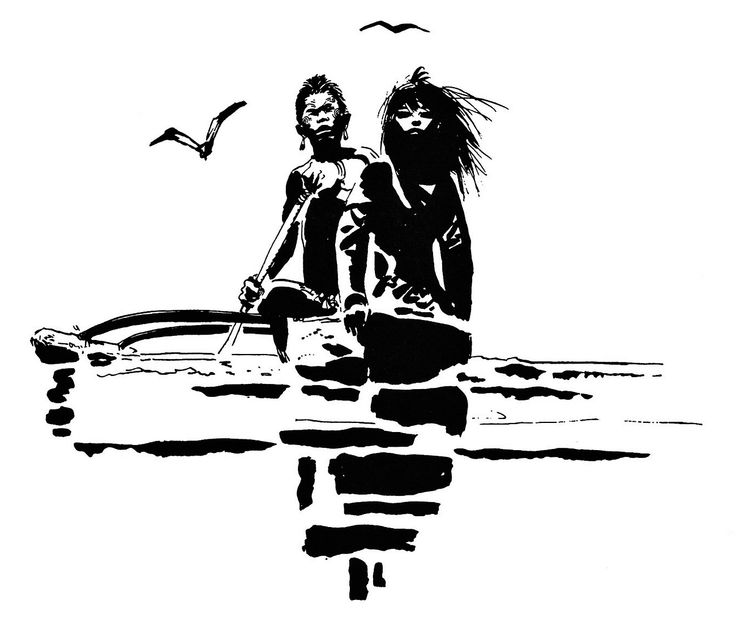 Hugo Pratt’s Ballad of the Salty Sea, a south sea adventure about pirates and lost children, introduced the world to his celebrated creation Corto Maltese. First published in Italy in Pratt’s own magazine Sgt Kirk, Ballad of the Salty Sea depicts Corto as an intriguing but somewhat secondary character. He enters the lives of the story’s protagonists, brother and sister Pandora and Cain, tied to a raft and supposedly cast adrift by pirates. The story also introduces Rasputin, a shady Russian émigré who has rescued the children, and whom Corto will encounter repeatedly.

Ballad is rollicking adventure, full of double-crossing, kidnapping and chases against an exotic backdrop, inspired by great 19th century adventure writers such as Conrad and Melville, and peopled by a rich cast of characters, rather than featuring just one. Pandora is a young woman with steel inside her despite her frail exterior, while her brother Cain is dangerously impetuous. The mysterious Monk is more than a one-sided Nazi bad guy, while Rasputin’s indecisiveness and self-centred nature prevent him from being the villain he would love to become.

In later stories Corto turns up at key moments in European history during the 1920s and 1930s, and even here, a shadowy figure in an out of the way spot, there are political overtones. The story covers the early years of World War I, and among the island drifters are representatives of most of the key powers.

Many books and essays have been written about why so many people find Corto Maltese so involving and the character so appealing. Key from the very start is being unable to second guess his motivation or his next move, and that while Pratt teasingly reveals the odd fact about his background, he remains enigmatic to the last. Corto’s colourful past and involvement with all sorts of mysterious and mystical characters echoes Pratt’s own unsettled life, moving regularly to new countries in his formative years and being introduced by members of his cosmopolitan family to ideas such as the cabbala.

Reviewers often refer to Corto Maltese, rather lazily, as a rogue with a heart of gold, but to accept such a cursory judgment does not do justice to the complexity of Pratt’s characterization. Also significant is Pratt’s skill both as an artist and a writer. There is never one extraneous line in his panels or one word too many, well served by the 2020 EuroComics translation.

Pratt designed pages magnificently, using heavy blacks and a mixture of rough and ready and sensitive inking to bring his broad range of characters to life, often with just a handful of strokes: talking heads drawn by Pratt are fascinating. But how to access this treasure trove of adventure? NBM produced Ballad as a seven part comic series, Harvill Press’s next try at popularising the series improved on that, but was still in black and white and sketchily printed. Universal printed in black and white from reformatted Casterman scans at too low resolution resulting in pixelated lines and shrank pages to boot (NB: Castermann are known for jigging about with original layouts in a counter-intuitive, but author-approved fashion). Additionally Universal’s 2012 volume lacks Casterman’s beautiful colouring in hardback and lots of Pratt’s lush sketches and notes. However it does feature a new and very superior translation, improved on again with the 2020 edition, that improvement extending to a correctly translated title, now The Ballad of the Salty Sea. However you access it, with multiple different editions or not, it’s well worth the effort. Chronologically, Under the Sign of Capricorn follows.