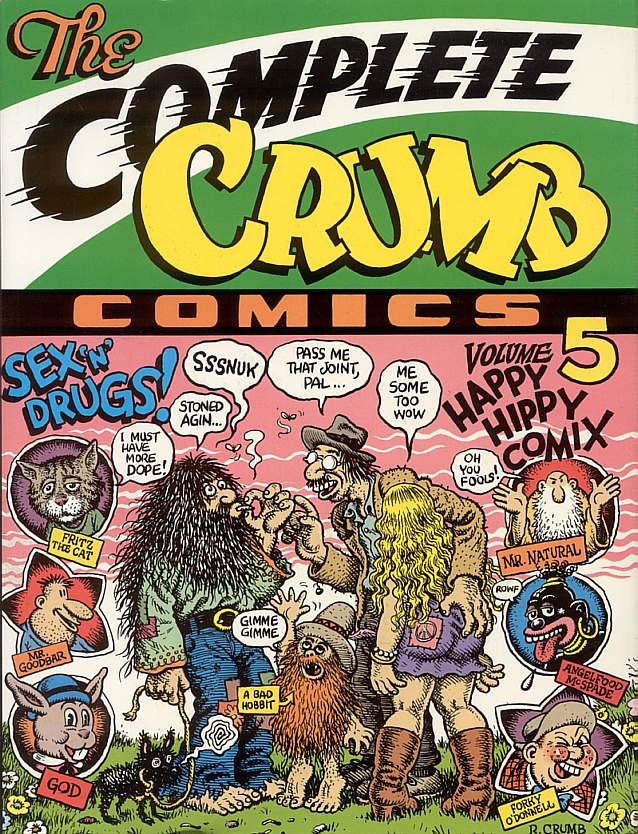 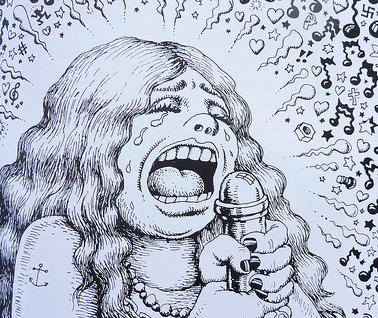 The Complete Crumb Comics Vol 5 features some of Robert Crumb’s most subversive cartoon artwork from the height of the Underground comix publishing craze when everyone was dropping out and getting high, Crumb included. He chronicles being perpetually stoned for several years (reporting in the introduction that he didn’t particularly like it, but felt it was uncool to refuse) and the mix of dope and hallucinogenics certainly shook out all the unthinkable and unmentionable ideas from the nooks and corners of his brain, with electrifying results.

Crumb confronts racism and sexism with strips about exaggerated black character Angelfood McSpade, but in places starts to wallow in exposing his prejudices as well as commenting on society’s attitudes. To modern audiences fake ads for tinned Nigger Hearts are even more explosive than they would have seemed in 1968, while Crumb’s increasing obsession with amazonian women with huge butts found him able to indulge in his own fetishes while lambasting both sexism and women’s libbers at the same time. Strips like ‘Lenore Goldberg and her Girl Commandos’ or his parody of girls’ romance comics, ‘The Bleeding Heart Syndrome’ where his style morphs from a take off of classic romance titles into the rounded, heavy-lined cartooning style he became famous for in the 1960s, fire little darts into both sexists and feminists while exulting in drawing distorted female anatomy. Crumb understands very well the thrill of being naughty and plays on this as he pushes his audience further and further with increasingly outrageous material.

Setting out to publish all of Crumb’s work in a series of volumes is a massive undertaking, and Crumb fans and scholars of comics should be grateful for Fantagraphics’ vision in producing this series. However someone looking for the best of Crumb’s underground work should probably start here, with Volume 5, which is packed with polished shorts and longer stories featuring some of his best known characters from the period, including Fritz the Cat and Mr Natural. Because it follows Crumb’s career as chronologically as possible, there is much less colour work, as Crumb had given up commercial illustration and begun to find fame and all the fortune he could handle as the Underground started to go overground. Apart from a handful of covers, the strips here are all in black and white, for the most part well reproduced with strong, crisp inking. Most are in the classic style associated with 1960s Crumb, with heavily outlined figures, regimented textures, rigid panel grids and well composed panels, and careful hatching used to give a sense of volume.

Of particular interest for students of Crumb in this collection are the jam strips produced for Zap Comix, where Crumb worked alongside S Clay Wilson, Victor Moscoso, Rick Griffin and Gilbert Shelton. The final story, from April 1969, ‘Eggs Ackerley in ‘Eyeball Kicks” is typical of the absurdist yet rather dark nature of Crumb’s humour at the time, in which our hero defeats (and eats) a bunch of vultures going round stealing people’s eyes. In Volume 6 Crumb would become more fixated on his particular hobby horses, dropping several of his best known characters in favour of more biting satires of modern America and taking the outrage up another level, but here everything seems to be in balance: there’s crazy psychedelia, parody, simple and complex cartooning, sex, politic and human insights all swirled together into a compelling whole.